Trump claims Biden may yet be removed from office while Republican lawmakers attack Jan. 6 probes 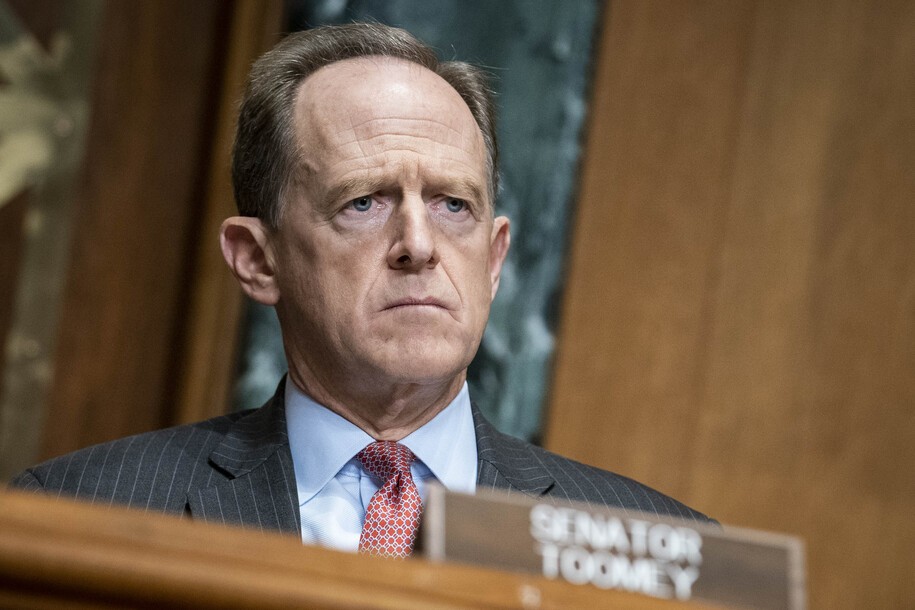 Republican Sen. Pat Toomey is retiring. He doesn’t need to shine Donald Trump’s boots, or engage in fantastical stories of supposed election fraud. He doesn’t need to run interference for a movement that goaded supporters into a frenzy by claiming that even elections themselves were now illegitimate, causing violent believers to launch a direct attack on government to nullify a Trump loss. Anything he is or isn’t doing right now he is doing because he wants to.

Right now, Sen. Pat Toomey wants America to stop probing the causes of a violent insurrection. Investigating how it happened is just a ploy by Democrats to hurt Republicans, he says. It is a “constant reminder about a terrible episode in our history.”

GOP Sen. Pat Toomey says investigating Jan. 6 “is politically to the advantage of Democrats, to try to keep this issue in the forefront” and argues “it is a constant reminder about a terrible episode in our history … rather than looking at the policies of the current President” pic.twitter.com/jlT8qk6V4t

Aside from that whole sequence being the product of someone who deep down must just be a terrible person, I mean honestly how do you even look at yourself in the bathroom mirror in the morning after a yesterday of making arguments like that, there is a rather fundamental flaw in Toomey’s logic. The insurrection attempt isn’t “history” yet, because it ain’t over. A single day before Pat Toomey went on television to claim that investigations of the attack’s origins were merely political gamesmanship, the insurrection’s top orchestrator and Republicanism’s buffoonish Dear Leader figure was yet again claiming that the election had been rigged, that the people who were looking to nullify it were patriots, and that all of it may yet return him to presidential power, toppling the current sitting president, the Constitution, and our democracy in one fell swoop.

Have you met Donald Trump, Sen. Pat Toomey? I believe you have. Donald Trump doesn’t think that the insurrection is over. Donald Trump is still goading on crowds with the precise lies that launched a domestic terrorist assault on the Capitol to begin with.

Do you want to revise your remarks, Pat Toomey?

“He doesn’t do a damn thing” — Trump dogs Republican Gov. Doug Ducey in his home state of Arizona and gets the crowd booing him. He then pivots to bashing Senate Minority Leader Mitch McConnell, who also gets booed. pic.twitter.com/3HMuZHrx5V

Trump is out here just making stuff up in hopes of snowing people into believing the election was stolen from him pic.twitter.com/YpLugDVxTn

Somebody explain to me how Trump is not the ongoing head of the insurrectionist conspiracy to overthrow American democracy. All those people indicted? He’s publicly telling them to do it again day after day. And they’re defense is “he told us to!” https://t.co/8DnED0Sf18

And, more importantly still, he continues to insist to his rabid and delusional base that the election may yet be nullified, returning him to power.

The attempt to topple democracy by throwing out the results of an election that did not go the Republican Party’s way is not just “history.” It is ongoing. Sen. Pat Toomey is himself assisting in it by demanding that the causes of the pro-Trump violence by a pro-Trump mob bent on nullifying an election be left unexamined—that they be ignored, so that his party can better focus on demonizing the Democratic president Trump continues to rail against.

And he is doing it anyway. “History” will lump that in with all the rest, presuming Toomey’s party does not get its way and democracy does indeed survive this explicitly fascist moment.

Pat Toomey was one of just seven Republican senators who agreed, back in February, that Donald Trump should be impeached for inciting the insurrection that Toomey now says needs no further review. He is not stupid. He is not reflexively a coward. But he still seems more intent on deflecting blame for the violence away from his party’s top officials and fellow lawmakers than he does on ensuring that the insurrection truly fails. At the moment, the insurrection has not failed. The man most responsible for it is even now giving new speeches to new crowds in which he claims he may yet be returned to office—if only his allies have the extraconstitutional courage to bring that change about.

This is the same Pat Toomey who pushed hard in 2012 and 2013 for the sham Benghazi investigation: “I have long supported a congressional investigation and want to get answers to important questions,” he said back then. https://t.co/1juCRglyBA