Trump Jr. uses bigotry to defend bigot when Tucker Carlson is called the ‘worst human being’ 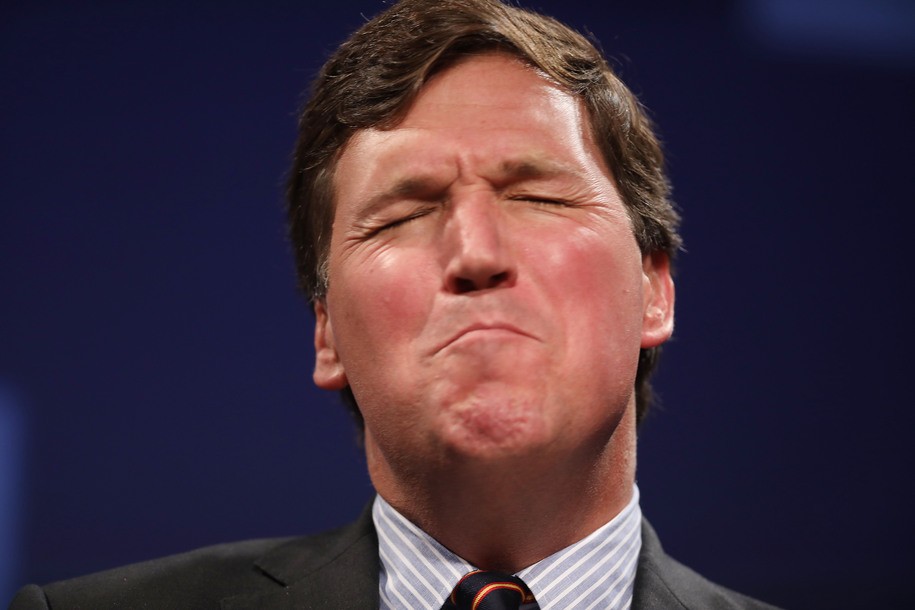 A fly fishing guide in Montana had the kind of opportunity many of us only wish we could tap, and that is to tell Fox host Tucker Carlson, an irresponsibly vocal anti-vaxxer, how much damage he has done. “You are the worst human being known to mankind. I want you to know that,” Dan Bailey is seen telling Carlson in video posted to the Montana man’s Instagram page on Friday.

Bailey encountered Carlson in Dan Bailey’s Fly Shop in Livingston, but neither is affiliated with the shop, according to a statement shared both on the business’s website and at HuffPost. “On July 23rd, a well-known television personality, Tucker Carlson, was affronted while shopping at Dan Bailey’s Outdoor Company. Coincidentally, the person engaging Mr. Carlson was a local resident named Dan Bailey,” the store’s owner Dale Sexton said in the statement. “This person has no affiliation with our business, other than he shares the same name as our founder, who passed away in 1982. To be clear, we treat every customer equally and respectfully. Our staff was professional and cordial to Mr. Carlson, as we are with all of our customers.”

Good morning! Reposting this video of a Montana man telling Tucker Carlson he is “the worst human being known to mankind” just because. pic.twitter.com/AeZyiTbi7k

The Dan Bailey in the video was hilariously unprofessional and uncordial. “It’s not everyday you get to tell someone they are the worst person in the world and really mean it!” he said in the caption of his Instagram post after approaching Carlson. “What an a–hole! This man has killed more people with vaccine misinformation, he has supported extreme racism, he is a fascist and does more to rip this country apart than anyone that calls themselves an American.”

In support of Carlson, the former president’s son Donald Trump Jr. tweeted his own form of bigotry against transgender parents. “Is the loser who went out of his way to have someone video him harassing Tucker in public for some viral content the model for the new Pregnant Male Emoji? The likeness is uncanny! #SoBrave” he said in the tweet on Sunday.

Film producer Evan Shapiro tweeted about the encounter: “Dan Bailey calmly spoke facts. Tucker tried to use his kid to shield himself from hearing them. Monday @TuckerCarlson will say Bailey attacked him. He will cry like a baby. He will try to dox Bailey in retaliation. Watch. Share. Don’t let him.”

Carlson has been casting doubt on the effectiveness of vaccines for months now. “If vaccines work, why are vaccinated people still banned from living normal lives,” he asked on April 13, before the Centers for Disease Control and Prevention (CDC) did in fact issue revised guidance that it was safe for vaccinated people to interact without masks. “Honestly, what’s the answer to that? It doesn’t make any sense at all,” Carlson added in April. “If the vaccine is effective, there is no reason for people who have received the vaccine to wear masks or avoid physical contact.”

What Carlson’s rudimentary argument failed to take into account was how the unvaccinated population affects public health in total. As of Friday, only 49% of the U.S. population was fully vaccinated, the CDC reported. Surgeon General Dr. Vivek Murthy told CNN host Anderson Cooper: “There have been multiple times when we have been fooled by COVID-19, when cases went down and we thought we were in the clear and then cases went up again. It means we shouldn’t let down our guard until cases not only come down but stay down, and right now cases are actually going up. Cases are going up, hospitalizations are going up, death rates are ticking up.”

Dr. Brytney Cobia wrote in a heartbreaking Facebook post last Sunday: “I’m admitting young healthy people to the hospital with very serious COVID infections. One of the last things they do before they’re intubated is beg me for the vaccine. I hold their hand and tell them that I’m sorry, but it’s too late.”