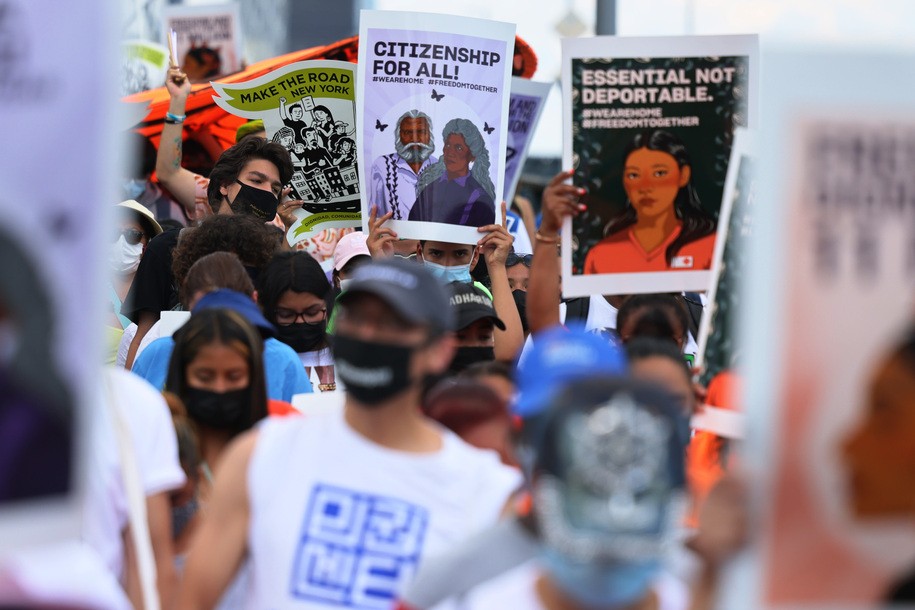 Immigrant rights advocacy group America’s Voice noted this week that the political arm of the House Republican caucus has been running frantic ad after frantic ad against House Democrats who voted for pro-immigrant measures in the chamber back in March. Except the National Republican Campaign Committee (NRCC) is running these ads when some of their own GOP members voted for these measures too.

This political arm of the House Republican caucus is also trying to attack these votes in support of young immigrants, temporary status holders, and essential workers when new polling shows continued public support (including from Republicans) for legalization.

Data for Progress asked more than 1,200 likely voters in a new poll if they support a pathway to citizenship for “undocumented immigrants who were brought to the United States as children, people who are contributing and working here legally due to war or natural disaster in their home countries, and farmworkers and other essential workers?” An overwhelming majority—70%—say they do.

While support is strongest among Democrats and independents at 82% and 75% respectively, a majority of Republican voters, 53%, are also in favor of these pro-immigrant measures. “This number remains virtually identical to a month and a half ago showing durable support for delivering path to citizenship,” Data for Progress tweeted.

Congressional Democrats should be carrying this knowledge with them as they continue to hammer out a budget reconciliation package containing a pathway to citizenship for young immigrants, temporary status holders, and farmworkers. Republicans and anti-immigrant professionals from the Tanton Network are going to attack because that’s the playbook, even if they do have to ignore the pesky fact that these measures passed the House with support from dozens from their side.

“[S]everal House Republicans already voted for the bills whose provisions will likely be included in the reconciliation package,” Joe Sudbay wrote for America’s Voice. “The Dream and Promise Act (HR 6) passed with nine GOP votes while the Farmworkers Modernization Act (HR 1603) got 30 GOP votes. The attacks launched by the NRCC for ‘amnesty’ implicate their own Republican members.”

A number of Democrats have already made bold stances in saying that the only way they’ll support the budget reconciliation package is if there is a pathway to citizenship included. This is made as Democrats have slim majorities where they can’t afford any significant losses, Roll Call reported. “’I will not support any budget reconciliation deal that continues to leave hard-working undocumented taxpayers in limbo,’ Rep. Lou Correa, D-Calif., said in a statement Sunday, just weeks after Rep. Jesús ‘Chuy’ García, D-Ill., drew a similar red line,” the report said.

But if Democrats keep a unified front and remember their promises to undocumented communities, they can pass a historic package containing a pathway to citizenship for millions this year. And they should remember that it’s one of the reasons why voters put them in power last November (and in Georgia’s January runoffs). “As Congress weighs including path to citizenship in reconciliation, it’s clear that voters strongly and consistently support these measures,” Data for Progress continued.