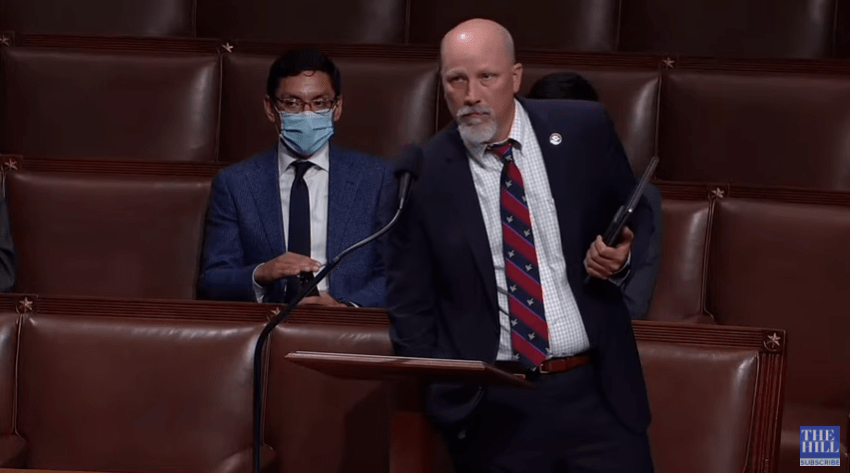 In a video shared by Scott Wong, a staff writer at The Hill, it appears a number of House Republicans are protesting the mandate that Congressional aides and visitors must wear masks, as per the U.S. Capitol Police. Otherwise, they would be asked to wear a mask and if they refuse, asked to leave—and if they refuse to do that, then they could face arrest. The big-picture context is that unsurprisingly, a number of Republicans are furious that the Capitol Police dare issue an entirely reasonable mandate to keep people relatively safe and healthy while going to work in person.

This protest appears to include House Republicans walking to the Senate Chambers, where masks are not mandated and are only recommended. Some Republicans are falling over themselves to accuse House Speaker Nancy Pelosi of trying to “control” half of the Capitol, and a certain Republican from Texas is not being quiet about his anti-mask agenda—even if he doesn’t have most of his own party on his side.

Cristina Marcos, also a reporter for The Hill, tweets that the House began debating, but when Republicans had their turn, Texas Rep. Chip Roy forced a vote on a motion to adjourn. Why? Apparently to protest the aforementioned reasonable memo from the Capitol Police about masks. In the end, all Democrats voted “no” and only 27 Republicans voted “yes.”

“If we’re going to arrest our staff,” Roy said, as evidenced in the clip at the bottom of this post, “I make a motion to adjourn.” Mind you, the memo pretty clearly outlines that arrest wouldn’t be the first response.

This is also not the first time Roy tried to adjourn over the mask mandate; on Wednesday he said, “This institution is a sham, and we should adjourn and shut this place down.” Also on Wednesday, Q-anon Congresswoman Marjorie Taylor Greene of Georgia gave him a standing ovation, but he was otherwise pretty similarly shut down by even his own party.

As some background, in a letter shared with his officer corps on Wednesday, Capitol Police Chief Thomas Manger instructed that if a staff member or visitor refuses to wear a mask after being requested to do so, they will be denied entry to the House side of the Capitol, as reported by CNN. If they fail to “comply or leave the premises” after being asked to do so, they could be arrested for unlawful entry. When it comes to Congressional members, however, Capitol Police are directed to report lawmakers to superior officers who will then report the situation to the House sergeant at arms.

In terms of the actual House floor (the rules for which came before and separate from Thursday’s Capitol Police update), members who sidestep mask rules first get a warning, then a $500 fine, then a $2,500 fine. Starting on June 11, members had been allowed to appear on the floor without a mask, but mask-wearing guidance was reinstated by House physician Dr. Brian Monahan due to the delta variant and updated Centers for Disease Control and Prevention (CDC) guidance. Makes sense.

Either way, Republicans are thrilled to have something to lash out about. In a tweet, South Carolina Rep. Nancy Mace essentially dared Pelosi to do something about her not wearing a mask outside of the House chamber. “Your insane power grab is showing,” she wrote, adding she follows “science” and not Pelosi. “Come and get me,” she added.

Republican Rep. Kat Cammack of Florida also tweeted about it being an “abuse” of power from Pelosi, though, again, this decision did not come from Pelosi but from the Capitol Police. Republican Rep. Thomas Massie tweeted something similar on Thursday morning, writing, “This is INSANE. Might as well come into my office and arrest my entire staff. We are not wearing masks. I support the Capitol Hill Police, but the Chief of Police made a mistake here. The physician and the chief of police don’t have this authority.”

Now, onto videos from Thursday.

House Republicans are protesting the mask mandate by walking to the Senate, where masks are not mandated by Capitol physician pic.twitter.com/sFD6AVnbr3

Also today, Capitol Police tweeted a statement reminding people that no one needs to be arrested because people can, in fact, simply wear masks.

“Regarding the House mask rule, there is no reason it should ever come to someone being arrested,” the tweet reads. “Anyone who does not follow the rule will be asked to wear a mask or leave the premises. The Department’s requirement for officers to wear masks is for their health and safety.”