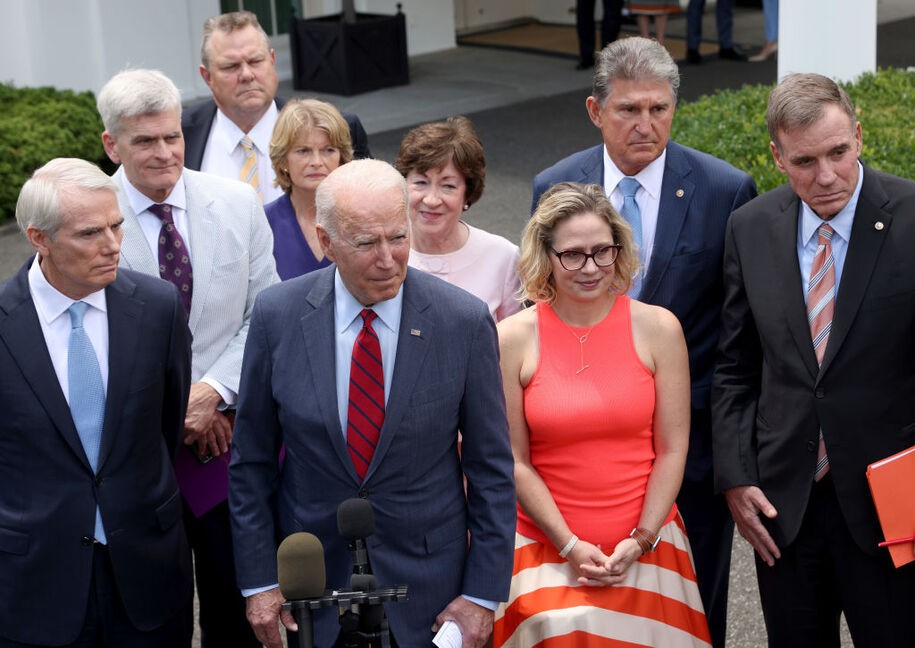 The quiet Biden-GOP talks behind the infrastructure deal

That embrace of a favored provision hit home with Cassidy. “The president made it clear that that was essential for him,” the senator said. “Since the president had said it must be there, obviously that was very helpful.”

And we have a bill. pic.twitter.com/KyFsLmtFXj

The White House has teamed up with TikTok stars, while some states are paying “local micro influencers” for pro-vaccine campaigns.

Fewer than half of all Americans age 18 to 39 are fully vaccinated, compared with more than two-thirds of those over 50, according to the Centers for Disease Control and Prevention. And about 58 percent of those age 12 through 17 have yet to receive a shot at all.

To reach these young people, the White House has enlisted an eclectic army of more than 50 Twitch streamers, YouTubers, TikTokers and the 18-year-old pop star Olivia Rodrigo, all of them with enormous online audiences. State and local governments have begun similar campaigns, in some cases paying “local micro influencers” — those with 5,000 to 100,000 followers — up to $1,000 a month to promote Covid-19 vaccines to their fans.

“These 500 tragedies are independent of the total number of children who contracted the virus. COVID would not be a worse disease if only 1,000 children contracted it, but 50% died. Either way, 500 children are dead. As Dr. Walensky said, “Children are not supposed to die”.

Many parents still haven’t gotten their adolescent kids vaccinated. What are they waiting for?

For individual parents looking at their own kids, however, the choice doesn’t always seem so clear-cut. Abby had a seizure last year that was never fully explained by the slew of medical specialists the family visited, says Kensek, and she occasionally suffers from high blood pressure. It makes Kensek nervous about signing her up for a relatively new vaccine, despite assurances of its safety in general.

“I don’t see the necessity of poking that beast,” she says. “There’s just not enough [data] out there for us yet. The CDC says it’s safe, and that’s great. But how many times have they gone back on their suggestions?”

“We’re seeing a lot of first doses right now, a lot of parents coming in, 30 to 40 year old age range bringing their 12-14 year old children as well,” Vanessa Davis, the clinic’s supervisor, said. It‘s reporting an 80% increase in demand from 2 weeks ago. https://t.co/llVJDGrm4w

Many health care systems across Georgia have no plans to mandate coronavirus vaccines for frontline workers, despite increasing infections caused by a variant that reportedly spreads as easily as chickenpox.

Nearly 60 major medical organizations called this week for mandatory vaccines for most health care workers, and an internal report surfaced from the U.S. Centers for Disease Control and Prevention that described the highly contagious nature of the Delta variant that is causing the latest increase. Even so, most health care systems in Georgia say that while they will require masks and follow other safety protocols, they’ll continue letting employees decide on their own about vaccinations.

Vaccination rates among health care workers vary widely across the state, although a majority of employees of many major providers have received at least one shot, The Atlanta Journal-Constitution found.

NEW: It is widely expected that a #COVID19 vaccine will be authorized for kids under 12 this year. We looked at the size and characteristics of this population. They represent 15% of the US pop, or 48 million. w/@SArtiga2 @_KendalOrgera @tolbert_jen https://t.co/iTMWQbQrDw

In the Republicans’ disinformation campaign, the arrested Capitol rioters are political prisoners and Speaker Nancy Pelosi is to blame for the attack.

n the hours and days after the Jan. 6 attack on the Capitol, rattled Republican lawmakers knew exactly who was to blame: Donald J. Trump. Loyal allies began turning on him. Top Republicans vowed to make a full break from his divisive tactics and dishonesties. Some even discussed removing him from office.

By spring, however, after nearly 200 congressional Republicans had voted to clear Mr. Trump during a second impeachment proceeding, the conservative fringes of the party had already begun to rewrite history, describing the Capitol riot as a peaceful protest and comparing the invading mob to a “normal tourist visit,” as one congressman put it.

This past week, amid the emotional testimony of police officers at the first hearing of a House select committee, Republicans completed their journey through the looking-glass, spinning a new counternarrative of that deadly day. No longer content to absolve Mr. Trump, they concocted a version of events in which those accused of rioting were patriotic political prisoners and Speaker Nancy Pelosi was to blame for the violence.

They Really Are Deplorable

Our friend Olivia Troye asks: “Mocking the officers, the trauma they lived, and downplaying Jan 6… How do these people sleep at night?” The real answer: it’s not just their business model, it’s become a way of life.

On one level D’Souza’s mockery of police officers injured in the line of duty is just another example of performative assholery, but it also fits a pattern worth noting: Charlie Kirk mocks Simone Biles for “weakness,” Tucker Carlson cackles about critics, and Laura Ingraham ridicules victims of the January 6 riots.

None of this has any relationship to the fight for freedom, limited government, or national greatness, or anything like a coherent set of ideas. But there is a through-line here: a strutting posture of faux toughness, and the celebration of the “strong” as opposed to the weak.

We’ve seen this play before.

Having downplayed Trump’s attempts to overturn the election, one must then poo poo worries about future elections. After all, if the GOP really has turned against American democracy, how can a person of integrity who respects the Constitution keep supporting the party? 4/x

We are at war with ourselves, but not for the reasons you think.

What accounts for this? It’s here that our popular explanations run aground. It can’t be all about a rise in conspiracy theories, since they’ve been around for decades. It can’t be social media, since Facebook and Twitter have become popular in the political arena only over the past few years. It can’t be a decline in material comfort, since incomes and employment have steadily improved over the past couple of decades. It can’t really be social trends, since most of them have improved too. And most of the specific issues that might cause alarm—immigration, racism, and more—are unlikely candidates on their own. They may be highly polarizing, but in a concrete sense they haven’t gotten worse since 2000. In fact, they’ve mostly gotten better.

To find an answer, then, we need to look for things that (a) are politically salient and (b) have changed dramatically over the past two to three decades. The most obvious one is Fox News.

To an extent that many people still don’t recognize, Fox News is a grinding, daily cesspool of white grievance, mistrust of deep-state government, and a belief that liberals are literally trying to destroy the country out of sheer malice. Facebook and other social media outlets might have made this worse over the past few years—partly by acting as a sort of early warning system for new outrages bubbling up from the grassroots that Fox anchors can draw from—but Fox News remains the wellspring.

WSJ: FDA Advisers and former FDA officials familiar with the process predict that full approval of at least Pfizer’s vaccine could come in September or October. https://t.co/iikXosuYmo