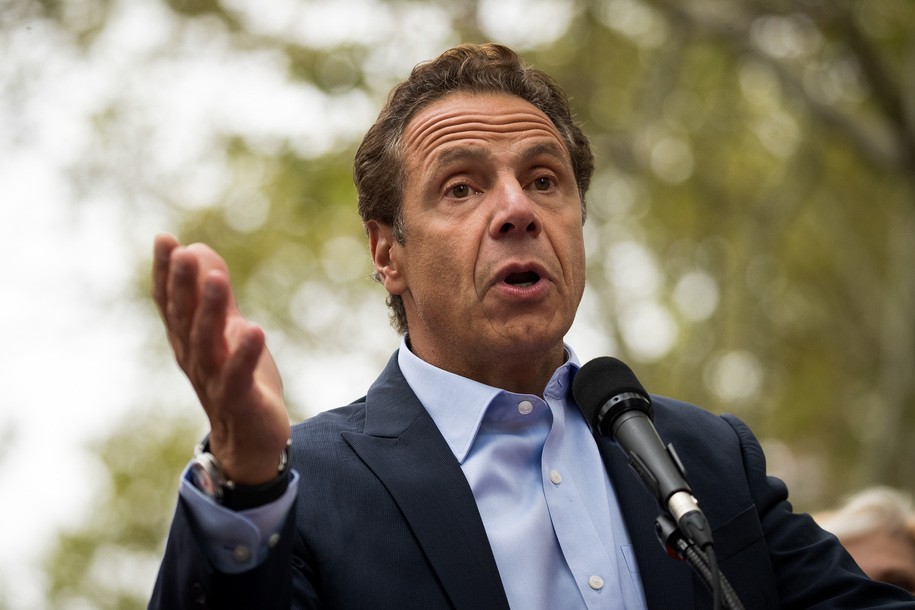 The special primaries for Ohio’s 11th and 15th Congressional Districts took place Tuesday, while Washington also held top-two primaries for mayor of Seattle and King County executive. You can find the Ohio and Washington results at their respective links, and we’ll have a comprehensive rundown of each contest in our next Digest.

● NY-Gov: New York Attorney General Tish James on Tuesday released the results of her long-awaited probe of Gov. Andrew Cuomo, a fellow Democrat, where she concluded that he’d violated federal and state law by sexually harassing multiple women, and that he’d retaliated against one of them for speaking out.

The governor responded by once again denying any wrongdoing, but that didn’t stop more prominent state and national figures, including President Joe Biden, from calling for his resignation. Additionally, Assembly Speaker Carl Heastie​ announced that his chamber would “move expeditiously and look to conclude our impeachment investigation as quickly as possible​.”​

James concluded her investigation without charging Cuomo with anything, saying she found the allegations “civil in nature,” though she said that local prosecutors could decide to act on them. Albany County District Attorney David Soares, whose jurisdiction includes the state capitol of Albany, said hours later: “We will be formally requesting investigative materials obtained by the A.G.’s office, and we welcome any victim to contact our office with additional information.” James’ office is also currently engaged in a separate probe looking into accusations that Cuomo used state government staffers for work on his recent memoir.

A.G. James’ 165-page report determined that Cuomo had sexually harassed at least 11 women, including two whose allegations had not been reported, by, “among other things, engaging in unwelcome and nonconsensual touching, as well as making numerous offensive comments of a suggestive and sexual nature that created a hostile work environment for women.”

James continued, “Our investigation revealed that the Governor’s sexually harassing behavior was not limited to members of his own staff, but extended to other State employees, including a State Trooper on his protective detail and members of the public.” At a press conference Tuesday, lead investigator Joon Kim said that Cuomo’s office was a place where “you could not say no to the governor,” which created an environment “ripe for harassment.”

The attorney general also wrote that Cuomo’s administration violated federal civil rights laws by retaliating against one of his accusers, former aide Lindsey Boylan, after she’d tweeted in December that the governor had sexually harassed her “for years.”

James said that officials had “leak[ed] to the press confidential records relating to an internal investigation into Ms. Boylan on unrelated issues,” and that current and former administration officials had considered “a proposed op-ed or letter disparaging Ms. Boylan that the Governor personally participated in drafting.” The report quoted a Cuomo staffer who testified to witnessing the governor’s inner circle “[t]rying to make her seem like she was crazy and wanting to get her personnel file out” in order to discredit her.

The state Assembly began an impeachment investigation into Cuomo back in March over these and other abuse of power allegations. Speaker Carl Heastie responded to Tuesday’s report by saying his chamber would undergo “an in-depth examination of the report and its corresponding exhibits.” Later in the day, Heastie promised the Assembly would move “expeditiously” to finish its investigation. State Senate Majority Leader Andrea Stewart-Cousins, meanwhile, reiterated her March call for the governor to resign.

Several other prominent Empire State Democrats, including Sens. Chuck Schumer and Kirsten Gillibrand, also once again told Cuomo to step down. They were joined by Reps. Tom Suozzi, Hakeem Jeffries, and Gregory Meeks, who were the only three members of the party’s delegation who hadn’t previously called for the governor’s resignation. Biden also urged Cuomo to resign on Tuesday, reiterating the call he made in March for the governor to step down if the attorney general’s investigation concluded he had engaged in sexual harassment.

Cuomo, though, once again made it clear that he didn’t intend to go anywhere willingly. The incumbent declared, “I never touched anyone inappropriately or made inappropriate sexual advances” and insisted, “Trial by newspaper or biased reviews are not the way to find the facts in this matter.” Cuomo spoke as a slideshow played of him hugging and kissing others on the cheek, including leaders and constituents, which he said proved his gestures were “meant to convey warmth, nothing more.”

Cuomo also mentioned one of his accusers, a former aide and sexual assault survivor named Charlotte Bennet, by name, saying that, while he was “truly and deeply sorry” for trying and failing to help her, she and her lawyer “heard things that I just didn’t say.” Bennett tweeted later in the day, “I do not want an apology—I want accountability and an end to victim-blaming. NYS Assembly Speaker @CarlHeastie, it’s time you do the right thing: impeach him.”

● IA-Sen: Retired Vice Adm. Mike Franken said this week that he intended to seek the Democratic nomination for Senate again once he’s done “fixing a last-minute medical issue at Walter Reed,” though he didn’t elaborate. Last year, Franken went up against businesswoman Theresa Greenfield, who had the backing of the national Democratic establishment, in a very difficult primary. Greenfield, who decisively outspent Franken and benefited from close to $7 million in outside spending, beat him 48-25 before losing to Republican Sen. Joni Ernst months later.

● MO-Sen, MO-02: Republican Rep. Ann Wagner announced Tuesday that she would seek re-election to the House rather than compete in the crowded primary for Missouri’s open Senate race. The current version of her suburban St. Louis seat voted for Donald Trump just 49.18-49.16, which made it the closest of any of the nation’s 435 congressional districts, but the GOP legislature has the power to gerrymander it all over again.

● WI-Sen: State Sen. Chris Larson said Tuesday that he was dropping out of the Democratic primary and endorsing Lt. Gov. Mandela Barnes.

● CA-Gov: Core Decision Analytics (CDA) is out with its first poll of the Sept. 14 recall election, and it finds the anti-recall no side ahead 49-42 among likely voters. Those numbers are a bit better for Democratic Gov. Gavin Newsom than a recent poll from UC Berkeley, which showed him fending off the recall in a narrow 50-47 spread.

Meanwhile, CDA finds conservative radio host Larry Elder leading his fellow Republican, 2018 nominee John Cox, 10-4 in the race to succeed Newsom if he’s ejected, with a 32% plurality marking themselves as undecided and another 22% of respondents opting for “None of These.” CDA, which conducted a few polls earlier this year for New York City’s Democratic primary, said it is “independent and not affiliated with any client, candidate campaign, nor any independent expenditure effort for or against the recall.”

● HI-Gov: Campaign finance reports are out for the first six months of 2021, and Lt. Gov. Josh Green outraised former Honolulu Mayor Kirk Caldwell, who is the only other notable Democrat who has entered the race, by a dramatic $424,000 to $10,000. Green ended June with a considerably smaller $636,000 to $509,000 advantage, though, thanks to money from Caldwell’s existing campaign account.

● NE-Gov: State Sen. Carol Blood said Monday that she was considering seeking the Democratic nomination to succeed termed-out Republican Gov. Pete Ricketts, and that she planned to decide next month.

This office has been in GOP hands since the 1998 elections, and any Democrat would start out as the clear underdog, but Blood does have experience winning on tough turf. In 2016, she prevailed in a race to represent part of the Omaha suburbs in the officially nonpartisan legislature by unseating a Republican incumbent 52-48 even as Donald Trump was beating Hillary Clinton 56-37 in her constituency, and she held on with 50.4-49.6 last year.

● AZ-02: Juan Ciscomani, who serves as a senior advisor to Gov. Doug Ducey, announced Tuesday that he’d seek the Republican nomination for this open Tucson-based seat. Ciscomani is the first notable Republican to enter the race for a Democratic-held district that, in its current form, has dramatically moved to the left over the last decade.

● NY-11: Political observers have been wondering about former Rep. Max Rose’s plans ever since the Democrat stepped down from his position on the Defense Department’s COVID-19 task force a month ago, and he’s not doing anything to tamp down on the speculation. Rose told NY1 last week, “Right now that next chapter is playing with my son, who’s just about a year-and-a-half,” and he added, “There’s plenty of different ways that one can continue to serve. I look forward to exploring those ways.”

While Rose didn’t mention any office he might be interested in, DCCC chair Sean Patrick Maloney quickly said he’d “100%” like to see his former colleague seek a rematch against Republican Rep. Nicole Malliotakis. Malliotakis unseated Rose 53-47 last year as Trump was carrying this Staten Island-based seat by a larger 55-44 spread, though this district could become bluer after redistricting.

● Boston, MA Mayor: Politico reports that City Councilor Annissa Essaibi George is spending $200,000 on an opening ad buy, which makes her the first current candidate to run TV spots ahead of the Sept. 14 nonpartisan primary. (State Rep. Jon Santiago went on the air before he dropped out last month.) Essaibi George, who describes herself as “a proud daughter of immigrant parents,” talks about her local roots before pledging to “build a better Boston.”