Abbreviated Pundit Roundup: Let me tell you how wonderful (checks notes) Kathy Hochul will be 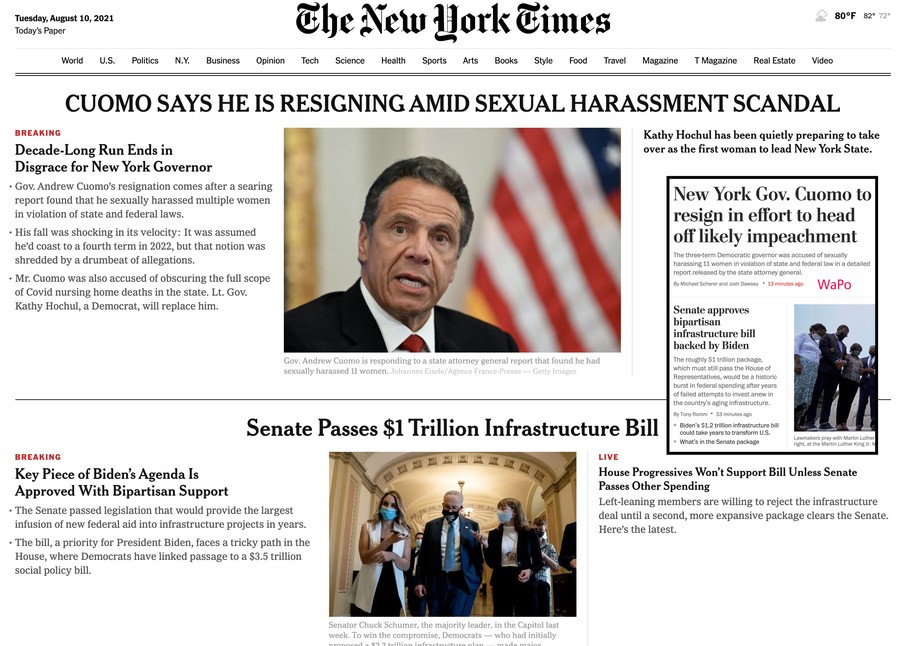 The sudden resignation (inevitable, but surprise on timing) of NY Gov. Andrew Cuomo has politicians and reporters scrambling.

Wait for better stories tomorrow, but the graphic from The New York Times highlights a big news day.

The power of 10: Inside the ‘unlikely partnership’ that sealed an infrastructure win

The president did his part. But chemistry and trust among the senators was what made $550 billion of bipartisanship happen.

Without Biden’s pledge not to pull a fast one, said Sen. Mitt Romney (R-Utah), “we probably would be dead in the water.”

“We would not have gotten the support of our colleagues, including Mitch McConnell,” Romney said. “If we had the extensive negotiations and agreed on a number, and then he just came back and doubled the number? … Why, it would have made the whole process irrelevant.”

Andrew Cuomo is in the most trouble, of course, but there are some other governors also in hot water for different reasons.

The rebellion against pro-Trump, anti-mask GOP governors is gaining steam

Let’s state this up front: GOP governors are not required by some higher Trumpian law to use official powers to actively thwart efforts to fight the spread of the coronavirus. Some are choosing not to do that: In South Dakota, the governor left decisions about mask mandates to local officials, and in Arkansas the governor admitted that an earlier ban on them was an “error.”

But the Republican governors of Texas and Florida — Greg Abbott and Ron DeSantis — are in a class by themselves. Their states are seeing some of the worst surges of covid in the nation, yet they are continuing to hamstring local officials from acting to protect their constituents.

Which is why these governors are facing a rebellion of sorts. In both states, ABC News reports, officials are defying limits on mask mandates, setting up direct conflicts with those governors.

New polling from @DataProgress: “Americans appear to generally agree inflation will slow down.” “Fifty-eight percent of likely voters said they believe that price increases are mainly due to temporary bottlenecks and shortages caused by the pandemic.”https://t.co/n7VDBBW5wD

The losers of Jan. 6 are trying to sanitize their sedition

History, the adage goes, is written by the victors.

Would that it were true.

In the Civil War, the U.S. Army, at a staggering human cost, eventually crushed the traitors who took up arms against their own country. But Lost Cause mythology rewrote the rebellion as a conflict over states’ rights, portrayed Confederates as gallant heroes fighting impossible odds, romanticized plantation life and sanitized slavery. The fictions, taught to generations of southerners, fueled Jim Crow and white supremacy.

In the retelling of Jan. 6, we see an echo of Lost Cause mythology. On that terrible day, terrorists took up arms against the United States, sacking the seat of the U.S. government in a deadly rampage. White supremacists marauded through the Capitol. It was a coup attempt, aimed at overturning the will of the people with brute force, encouraged by a defeated president and his allies. The Capitol Police and D.C. Metropolitan Police, badly outnumbered, ultimately prevailed in putting down the insurrection.

Here’s how additional vaccine approvals might unfold through the fall and winter: via @pw_cunningham w/ @EllerbeckAlex https://t.co/1BHwTYTJsG

‘Enough is enough’: Gov. Murphy’s outburst was the latest sign of rising anger over pandemic divide

As the delta variant drives up new cases and a realization sinks in that the pandemic is not over, some vaccinated people are increasingly frustrated.

The day after Gov. Phil Murphy’s verbal takedown of a group of anti-vaccination demonstrators, messages of support from friends, other politicians, and community leaders all over the world were still coming in.

Wednesday’s outburst at a North Jersey news conference — which quickly went viral — wasn’t planned, the governor said. It was a simple decision to push back against people who spread lies about the coronavirus vaccine.

“Frankly, enough is enough,” he said in an interview Thursday with The Inquirer. “The irresponsibility, the amount of people who are getting sick and dying because of these people believing in falsehoods — they need to be called out.”

This tells you most of what you need to know about independent voters. https://t.co/9nunPeKhav pic.twitter.com/wCZBTI4vZI

When it comes to the new coronavirus surge, Florida is an obvious outlier

There is no real mystery undergirding Florida Gov. Ron DeSantis’s (R) decision not to advocate for measures aimed at containing the spread of the coronavirus in his state. During the first six months of the year, when cases were falling, he made his future ambitions very clear, embracing a variety of right-wing culture-war fights with an obvious eye toward maximizing his position for the 2024 Republican primary. He’d deny this if asked, no doubt, because there are legal obligations that accompany an actual declaration of candidacy and because elected officials enjoy being courted for such roles. But if you’ve seen a candidate position himself for a run, you knew what you were seeing….

It is, however, very clear that the pandemic is going unusually poorly in Florida, particularly because of how many of the state’s residents have been vaccinated.

For the millionth f*cking time: https://t.co/2IKQbyMOMD

Of course it was asinine, flying in the face of public health, for Florida Gov. Ron DeSantis to issue an executive order banning the use of vaccine passports, which are an eminently sensible way for private businesses to stay open in a deadly pandemic. Of course it wouldn’t hold up in a court of law. And of course DeSantis’ lawyers now vow to keep fighting after a federal judge blocked the ban, granting Norwegian Cruise Line’s request for an injunction so they can continue to screen those on their boats for inoculation.

DeSantis may have graduated from Harvard Law, but all the legal education in the world can’t stop a man from putting poisonous politics over the well-being of his people.

The least vaccinated religious group is also the most likely to believe in conspiracy theories, writes Editorial Board member @C_Stroop. White evangelical apologists blame the young and the secular, though.https://t.co/O3h1Q29Q1f

Has Ron DeSantis cracked the code to lead the post-Trump GOP?

It’s all going according to plan.

In fact, more than any other Republican, DeSantis may have cracked the code of how to position oneself to lead the GOP in a new era that is simultaneously post-Donald Trump and defined by Trumpism.

Any politician can be an Internet troll concerned with nothing so much as Owning the Libs, and many in DeSantis’s party think that’s their most fruitful path to success. But to really capture the hearts of the party base, you have to show your willingness to do actual harm to people’s lives as you wage war against the other side. And that’s where DeSantis is excelling.

Here’s what I note in both cases: The cranks typically have the superficial trappings of real science. Links to journal articles on the one hand, or on the other, impressively hackery looking hex dumps & spreadsheets full of IP addresses. “See, I’m giving you the evidence…”

Senior Biden health officials have for weeks worried internally about the low vaccine uptake in rural, conservative counties across the country.

With Delta spreading rapidly nationwide, fears about hard-hit rural areas are becoming realities in many states, including Arkansas, Louisiana, Alabama — and now Wyoming.

“There are times where I’ve seen what’s happening in other counties or other states, and I think, ‘Maybe the rural nature of our community is protecting us to some extent,’” said Kim Proffitt, the public health nurse and county manager for Uinta County. “And then things like the last three weeks happen and I think, not so much. Delta can spread in a rural community just like it can in an urban community — and especially if, in those rural communities, people are not being very cautious.”

Cuomo’s resignation is another reminder of why “bothsidism” obscures the real dynamics of partisanship. Democrats put immense pressure on the governor to resign. The parties differ in how they balance partisan power versus other considerations, such as governance and principle.