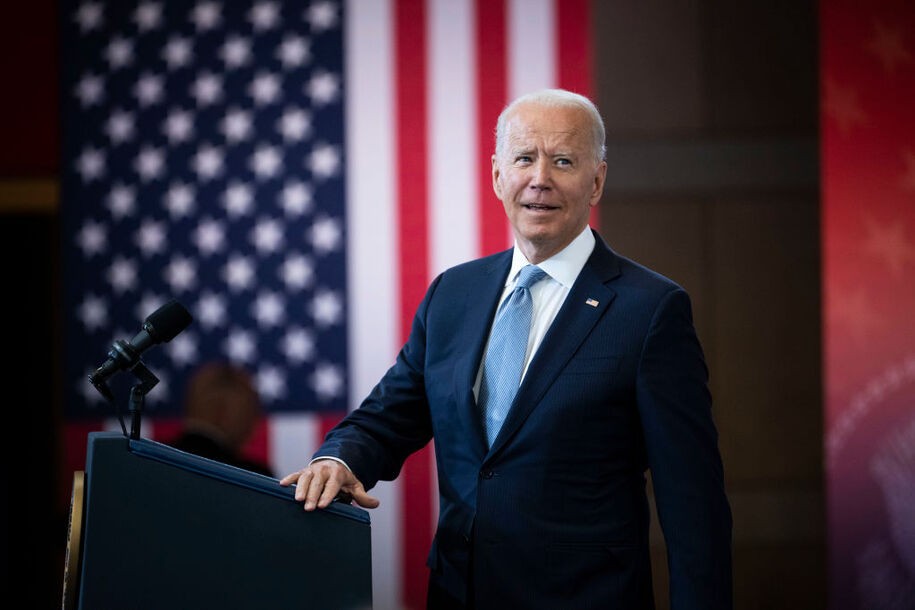 Charles Blow, writing for The New York Times, hopes that President Joe Biden does not repeat the mistakes of the 32nd president of the United States, Franklin Roosevelt.

… as Biden seeks to anoint himself the next Franklin Roosevelt, we should note that there are some pitfalls that the 32nd president either wouldn’t or couldn’t avoid and that Biden may be dangerously close to repeating.

There is no doubt that the New Deal — a series of programs, public works projects, financial reforms and regulations enacted from 1933 to 1939 — transformed this country. There is also no doubt that Black people were betrayed, as racist lawmakers used many of the New Deal’s programs to uphold Jim Crow rather than to dismantle it. […]

I am particularly concerned that the Senate went into recess without moving forward on voting rights. I am also concerned that opponents of filibuster reform will point to the bipartisan support for infrastructure as proof that the Senate isn’t broken and the rules don’t need to be altered to pass voter protections.

Furthermore, much of the funding in the infrastructure bill will likely need to be funneled to states, and even if the bill is passed, it could be years before workers break ground on many of these projects. That work could — and will likely — extend well beyond the Biden administration.

Jennifer Rubin of The Washington Post maintains that the mainstream news media needs to give President Joe Biden “his propers.”

Journalists at mainstream media outlets are creatures of habit laced with cynicism. They rarely anticipate how swiftly events can change or how dramatically the future can depart from the past. How often do we hear reporters remark that something has never happened — just before it happens for the first time? In their deep cynicism about politicians, they routinely scorn those who do not conform to their low expectations. (Too optimistic! Too naive!) Those tendencies help explain why the mainstream media have consistently underestimated President Biden and falsely predicted the failure of his agenda.

Too many reporters, despite Biden’s success in delivering hundreds of millions of vaccines to Americans and passing a $2 trillion rescue plan, have maintained a default setting in their reporting in which Biden struggles to make good on his plans or underestimates his abilities to enact them. The administration, in this telling, is forever in some sort of “crisis,” and negotiations are always on the verge of failure. Whether this “Perils of Pauline” narrative is a deliberate effort to build drama into news or whether journalists fail to comprehend the complexity and dynamics of legislative negotiations, the result is coverage that leaves readers and viewers nearly certain Biden will fail.

Lately, our governor, Kay Ivey, has done nothing — nothing for better, nothing for worse. And most other elected officials here seem content with her dithering. Today she’s going to Mobile, the hot zone of Alabama’s latest outbreak, not to visit hospitals or to rally patients at vaccine clinics — but for a ribbon-cutting.

There are worse places than Alabama, I keep telling myself. We could live in Texas, where their governor has banned mask mandates in schools. Or in Florida, where their governor has threatened to cut pay for schools that try to stop this disease. Or in Tennessee, where public health officials quit promoting vaccines for children — not just coronavirus vaccines, but all of them.

Now we’re watching case levels and hospitalizations rise, faster this time than ever before. Doctors have gone on television to warn that pediatric hospitals are filling up. And yet, none of this has inspired a significant change in public behavior. Instead, we’re back to arguing about masks and mandates. All those debates will miss an important point: None of this would have been necessary if we’d done what we were supposed to.

Dhruv Khullar of The New Yorker has one of his usually long but highly informative takes, this time on the subject of COVID-19 variants.

During this pandemic, we’ve developed and deployed vaccines in real time. Meanwhile, sars-CoV-2 is replicating not in a dozen flasks but in tens of millions of people, some of whom have been immunized, all of whom exert selective pressure for the virus to find new, more efficient replication strategies. The virus will continue to mutate every moment of every day, for years, for decades. The fear is that it will hit upon a second citrate moment: a mutation, or set of mutations, that enables it to circumvent our vaccines, which so far have proved spectacularly effective and resilient. For those who remain unvaccinated—the majority of humankind—there is also the horrifying prospect of a variant that is vastly more contagious or deadly. Every few months, we learn of a version of the virus that seems somehow worse: Alpha, Beta, Gamma, Delta. The coronavirus appears destined to march its way through the Greek alphabet—a prizefighter getting quicker, slicker, stronger with each opponent. What are the limits to its evolutionary fitness? Are they knowable? And, if so, how close are we to reaching them?

I’ve gotten a bit exhausted on takes of how Nina Turner lost the Ohio race and I don’t agree with everything that Steve Phillips, writing for The Nation, says in his take here, but the fact that Turner seems to have largely ignored grassroots campaigning in a special election is a not a take that I have read.

Looking through Turner’s spending reports, it’s clear that the people who ran her campaign defaulted to the typical playbook of putting far more money into television and digital ads than into the nitty-gritty work of getting people to cast ballots. […]

But Turner’s team squandered the bulk of her money, spending nearly $2 million of the $3.7 million expenditures on television and digital ads, according to the mid-July filing with the Federal Election Commission. (Ocasio-Cortez’s 2018 campaign, by contrast, spent no money at all on television ads, according to their FEC report.) There is scant evidence in the FEC filings of any meaningful Turner campaign resources going to canvassing and voter turnout: The category for GOTV lists just $5,000 in expenditures.

Renée Graham of The Boston Globe is taking pride in our LGBTQ Olympians.

It wasn’t that long ago when such an unapologetic affirmation of LGBTQ lives at the Olympics would have been unthinkable. Queer athletes have always competed in the games, yet no gathering has ever had so many out Olympians with at least 182 competitors representing about 30 countries, according to Outsports, an LGBTQ sports website.

They didn’t just show up — they showed out, with 55 athletes winning 32 team and individual medals in events ranging from judo and track and field to synchronized diving and rowing. Rapinoe, one of the world’s best-known soccer players, won a bronze medal.

Living in light and truth had a positive effect not only for the athletes but also served as lasting examples of how talent and success thrive when freed from the darkness of a closeted life.

“Athletics is the most exciting part of my life and it brings me the most joy,” Quinn (who uses they/them pronouns and goes by a single name), told CBC Sports. They became the first out trans and nonbinary Olympian to win a medal after Canada’s women’s soccer team claimed the gold. “If I can allow kids to play the sports they love, that’s my legacy and that’s what I’m here for.”

Clarissa Ward and Tim Lister of CNN have some new on the ground reporting on the dire situation in Afghanistan.

In capturing police and military bases, the Taliban have acquired armored vehicles, Humvees and heavy weapons as well as dozens of the ubiquitous pick-up trucks. A steady stream of captured vehicles, many of them provided by the US, left the Kunduz base Wednesday. One of the rebels could be heard saying that the weapons they’d seized were enough for all the mujahideen in Afghanistan.
In the face of the Taliban advances, there doesn’t appear to be a coherent strategy to turn the tide. The loss of life is staggering, with 6,000 killed since mid-April due to the unrest. There is talk of a reshuffle of senior military commanders. President Ashraf Ghani visited the city of Mazar-e-Sharif on Wednesday — one of very few in the north still in government hands — to push his appeal for civilians to join a “popular uprising” and fight the Taliban.
One of the Afghan warlords accompanying him was Marshal Abdul Rashid Dostum. He was defiant, saying the Taliban had “many times made their way to the north, and they were caught in the trap, and with the will of God this time as well.”

Laura Zhou of the South China Morning Post writes about the increasing diplomatic tensions between China and Lithuania over Lithuania setting up diplomatic offices in Taiwan. The decision could, potentially, reverberate in EU and NATO circles.

China recalled its Lithuanian ambassador on Tuesday in response to Vilnius’ move to allow the self-ruled island – which Beijing regards as part of its territory – to set up a representative office under the name of “Taiwan”.

Beijing said the decision was a violation of the one-China policy, a key cornerstone of Chinese policymaking and diplomacy.

It was the first time China had recalled an ambassador from an EU member state since the bloc was established in 1993. But observers said Beijing may not achieve its desired outcome this time.

Hours after Beijing‘s announcement, Lithuanian President Gitanas Nauseda said that as a sovereign country, Lithuania would decide its foreign policy for itself and urged Beijing to change its decision.

“Sino-Lithuanian relations should be based on the principle of mutual respect. Otherwise, the dialogue turns into one-sided ultimatums, which is unacceptable in international relations,” he told the Baltic News Service. “At the same time, as a sovereign state, Lithuania itself decides with which states or territories to develop economic and cultural relations, without violating its international obligations.”

Finally today, former 5th Ward alderwoman of Evanston, Illinois, Robin Rue Simmons pens an opinion piece for The Washington Post, saying that local efforts in attaining reparations for Black Americans may be the way to go for now.

Though just about any city in the United States could make a similar claim, given slavery’s malignant role in American history, Evanston would be a fitting touchstone for the reparations movement.

Its persistent racial wealth gap mirrors that of a nation where White families have eight times the net worth of Black families, according to the Federal Reserve. Evanston’s Black residents, according to city documents, earn an average of $46,000 less in household income than White residents and have 13 years fewer in life expectancy.

Everyone have a good day!