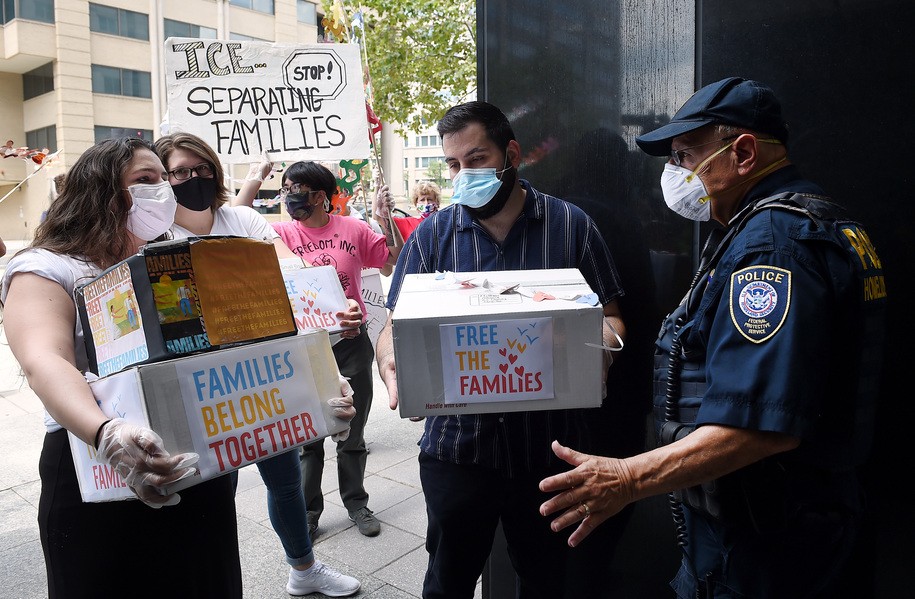 Remember how advocates have long said that Immigration and Customs Enforcement (ICE) has intentionally targeted them for their activism? Court filings and internal government records obtained as part of a new report from the University of Washington School of Law Immigration Clinic, Just Futures Law, and Mijente in fact show “a sustained campaign of ICE surveillance and repression against advocacy groups and activists.”

“It’s a charge ICE consistently denies. But advocates say there’s a growing body of evidence that can’t be ignored,” NPR reported. But the “advocates say” is completely unnecessary because agents admit it themselves, right there in black and white. In one email targeting prominent immigrant activist Maru Mora-Villalpando, ICE officials describe her and others as “instigators of all the turmoil” for actions protesting Washington State’s notorious Northwest Detention Center, writing that throwing her “into proceedings might actually take away some of her ‘clout.’”

“Various ICE records—such as those obtained through FOIA, produced through active litigation and even forms entered into her immigration file—demonstrate that ICE’s decision to place Maru in removal proceedings was an act of retaliation against her role in organizing against the NWDC,” the report said. “This explicit targeting of Maru was not an isolated case amongst those organizing to close the NWDC. Internal ICE records indicate that officials sought to install surveillance technology at NWDC to monitor and record the activities of the protestors at the NWDC.”

While ICE’s correspondence around Mora-Villalpando stemmed from 2017, the report said one organization that advocates for farmworkers and migrants in Vermont was harassed beginning in 2014, with ICE infiltrating the group with an informant. One Migrant Justice member was even detained after leaving a dentist visit in 2018. The report said that Migrant Justice members were explicitly told by ICE to be afraid.

“During the arrests and interrogation of the detained members, ICE spread misinformation about Migrant Justice, told arrestees that fellow Migrant Justice members would be the ‘next to go,’ and continued detaining members despite their not being enforcement priorities under the government’s own policies at the time,” the report continued. Migrant Justice would eventually sue ICE for harassing the group, settling for $100,000.

The report further reveals officials’ extensive surveillance of activists on social media. “ICE downloaded and circulated internally photographs of Grassroots Leadership staff Claudia Muñoz and Bethany Carson from Facebook. The photographs include a selfie of Claudia, a section cropped from a larger image of Claudia with a family member, and cropped images of Bethany apparently taken from photos of social events.” Other agents creeped LinkedIn accounts, while another may have tried to hack into a Migrant Justice member’s Facebook account.

“While social media information is quasi-public, the fact that taxpayer-funded officials at ICE devoted their time and resources to collecting personal information about immigration activists and community leaders is troubling and raises questions about those officials’ motives and goals,” the report continued.

But ICE has in fact paid tens of millions of dollars to track people. “As of 2018, ICE had paid a social media search corporation, Ghost Oak, a total of $45 million over approximately four years. Ghost Oak’s CEO is a former CBP employee,” the report continued. “Of equal concern, ICE provides taxpayer funds to a company called Babel Street for ‘Locate X,’ a tool that collects location data from smartphones, tracking the phone’s owner. Locate X can tell ICE officers which restaurants a person favors for lunch, which friends they visit, and whether they ever go to protests. Since the end of 2019, ICE has paid Babel Street approximately $787,700 for its location-tracking technology.”

It’s long been clear that ICE is public safety threat, yet the Biden administration’s first full budget request failed to slash funding for either ICE or CBP. The American Civil Liberties Union of Texas recently released a tracker showing “177 known fatal encounters with CBP, including incidents involving children and pregnant individuals” since 2010.

Advocates who were a part of organizing the report (which you can read in full here) are calling for reduced department funding, a return of targeted deported immigrants, and an end to surveillance, among a number of items. NPR reports that when asked about allegations of retaliation by agents in April, Department of Homeland Security Secretary Alejandro Mayorkas commented it was “unacceptable,” adding that “[r]etaliation in response to the constitutionally protected right of free speech—and quite frankly, the civic obligation to protest government positions with which one disagrees—that’s just unacceptable.” Secretary Mayorkas: The ball is in your court.