Amid climate crisis, HBCUs are investing in pathways to environmental sustainability 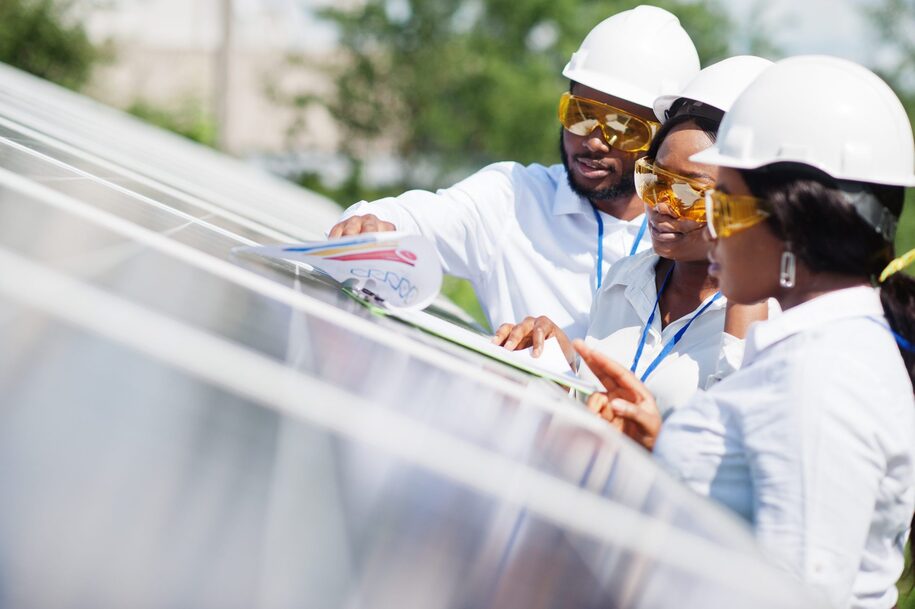 With the consequences of climate change growing more dire every year, the need to remove barriers to environmentally sustainable lifestyles has become increasingly urgent, especially for Black people. As the latest Intergovernmental Panel on Climate Change (IPCC) report details, sea levels will continue to rise and extreme weather will grow even more frequent in the coming decades. Black and brown communities in places like Lake Charles, Louisiana, Houston, Texas, and Puerto Rico will continue to bear the brunt of these disasters. De jure and de facto segregation have put Black bodies on the front lines of living in toxic and vulnerable environments—not by individual choice but by institutional design. However, the HBCU Green Fund, a nonprofit working to finance energy-efficient buildings and infrastructure upgrades while also providing interdisciplinary sustainability education, is seeking to equip Historically Black Colleges and Universities (HBCUs) such as Howard and Lincoln Universities, with the resources needed to be advocates and leaders toward a cleaner, net-zero future.

Historically, HBCUs have not had the same access to financial resources as other colleges and universities, and their endowments lag behind predominantly white higher education institutions by as much as 70%. And despite recent executive actions like Justice40, which is aimed at delivering “40 percent of the overall benefits of relevant federal investments to disadvantaged communities,” public and private HBCUs saw a significant decline in federal funding between 2003-2015, despite serving many low-income and first-generation students. These same students and their communities are the very ones targeted by extractive for-profit economies that contribute to the degradation of our environment.

HBCUs’ reliance on local, state, and federal funding can often leave those institutions in a precarious position where staying afloat financially leaves little room for new initiatives, such as implementing environmentally friendly practices. The HBCU Green Fund ultimately hopes to dismantle this barrier by providing HBCUs with the ability to make sustainable and environmentally responsible opportunities and resources more accessible for Black communities.

Felicia Davis, the founder and one of the three managing directors of the HBCU Green Fund, is a Howard University alumna who had “always imagined Black colleges making the quantum leap for energy.” Her work at the United Negro College Fund as their green building initiatives director, and later work at Clark Atlanta University, sparked the green fund’s beginnings. Davis expressed frustration that she “could identify projects and they weren’t happening because the resources weren’t there,” such as financing green buildings and getting adequate technical support.

Illai Kenney, the HBCU Green Fund’s second managing director, and Davis’ daughter, noticed the same systemic patterns affecting sustainability efforts, both as a student at Howard and then later in her professional career working with Howard University’s Office of Sustainability. The overarching issue wasn’t whether or not Black communities and HBCUs campuses valued sustainability—it was how to make sustainability more accessible to their communities, Kenney said. She and Davis already had some of the resources they needed—lived experience with HBCUs’ needs and Black culture, a solid grasp of the technology, and ample networks to provide information about anything outside their areas of expertise. But what they lacked was funding. This was the inception of the HBCU Green Fund—to be a pathway for the HBCUs communities to invest and take part in the just transition.

“The idea [behind the HBCU Green Fund] is that the HBCU community and larger Black community has everything it needs to create a new future for itself,” said Kenney.

Currently, the fund is expected to raise $1 million to begin implementing projects within the next five years. While the HBCU Green Fund has yet to launch its grassroots fundraising campaign, it’s currently being supported by grants and foundation donors. The fund wants to ensure they’ve built a solid base before expanding, Kenney explained. This includes publishing the fund’s second green report, which would seek a more extensive understanding of the HBCUs community’s needs. Additionally, the fund’s biggest goal remains to strengthen partnerships with other like-minded climate justice organizations, and to further collaboration across HBCU campuses. Once fully funded, Kenney says they intend to prioritize projects that “intentionally make space to open up the emerging pathways to opportunity and better quality of living.”

“We’re doing that background work before we get that pool of money (from grassroots campaigning) so we know exactly who to call, who has such needs, and the capability to do such projects,” said Kenney.

Kenney’s approach to grounding the Green Fund can be traced back to her time as a Howard student in 2007. She recalled how there was no recycling program to reduce waste or reuse materials on campus at the time, despite it being legally required. The campus was actually paying regular fines because of this. During her sophomore year, Howard had instituted a recycling program after students put forth demands to the administration. Around that time, she landed an internship with the DC Department of Public Works in partnership with Howard. It was there that she got her first taste of what building sustainability could look like. She and the other interns learned about the decision process that went into creating a recycling program and other components, like composting and recovery. In the end, the group got to build recycling programs for two local elementary schools. Her internship with Public Works eventually led to her working at Howard University’s Office of Sustainability once she finished her time as an undergraduate. With the office, she oversaw a water fountain project that installed over 50 new water filling stations around Howard’s campus, as well as energy retrofits, solar lighting, and more. She also expanded programs like Retool Your School, which helps provide grant funding to HBCUs to execute sustainability projects.

“We probably won more than $100,000 in grant money over time with different projects,” said Kenney.

Barriers to accessible sustainability aren’t limited to resources and investment, so the HBCU Green Fund is also attempting to change who reaps financial benefits from clean energy. The fund’s biggest forthcoming project is in partnership with Energea—a private company that connects investors with renewable energy projects to accelerate developments in global markets. Together they will launch Solarize HBCU, an initiative to provide solar power to HBCU campuses while also democratizing investment. HBCU students will be offered the first opportunity to invest in the project, and then it will open up to the broader HBCUs and Black community. The concept will also provide low-cost energy to the institutions, with no upfront costs for implementation.

“It’s very rare, particularly for Black people, that we have the opportunity to be the investor, as we’re always the last recipients of some kind of benefit,” said Kenney.

Alongside the launch of Solarize HBCU in the fall, the fund is working to design a fellowship that will provide HBCU students web-based training from high-level clean energy industry experts on financing, business management, science, and marketing. The fund’s ultimate goal is to give students the opportunity to obtain a credential or designation, such as a LEED certificate.

“One of the things we recognize is that it’s absolutely great to have knowledge but one of the biggest barriers for Black people is that we are often barred from having the credential,” said Kenney.

According to Davis, the HBCU Green Fund also supports micro-projects in Senegal and Ghana that involve weather stations in secondary education classrooms that are being led by faculty at Morehouse College, Tennessee State University, and Clark Atlanta University. Other pieces of the fund include a partnership with the National Technical Association where HBCUs across the country host programming such as geoscience workshops, student research symposiums, and STEM conferences. This year’s conference will be held at Lincoln University.

While federal initiatives like the Biden Administration’s Justice40 offer an additional avenue of financial support, HBCUs know from experience how easily funding can disappear, which makes the success of the HBCU Green Fund all the more essential. Kenney hopes the fund will be able to execute projects from the top down and ensure that students and the wider HBCU community will have ample resources and opportunities to build their own futures in the clean energy industry at every level. The fund intends to promote reinvestment in the community by hiring minority-owned businesses to be subcontractors for solar installations and architecture. Engineering students will also be invited to learn about installations, solar technology, and more. The hope is that the fund will provide continuous chances for HBCU students to gain the knowledge, credentials, and experience they’ll need to benefit from the possibilities offered in a growing energy industry.

“HBCU students should be able to experience and learn every step of the way,” said Kenney.

The increasing effects of the changing climate make it imperative for lifestyles to more greatly align with what the environment needs to remain hospitable for human life. Black people in America have long been aware of just how greatly infrastructure, culture, and socioeconomic status will impact a person’s ability to live, as well as how those inequalities will shape how climate change impacts their communities. For Kenney, the biggest question is how Black communities can have a greater say in how technologies that affect the environment are used, as well as full access to the potential financial, social, and cultural benefits of clean energy. The HBCU Green Fund’s mission is to answer that question.

Iris M. Crawford began her journalistic training with the Maynard Institute of Journalism Education’s Oakland Voices. She covers all things social justice with a particular interest in climate justice and arts & culture.