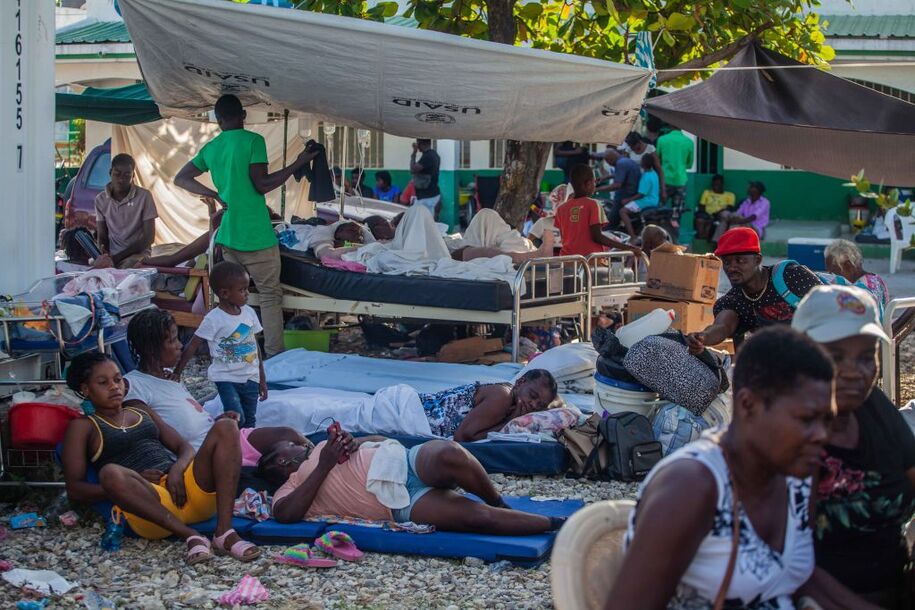 The death toll from the magnitude 7.2 earthquake in Haiti Saturday has killed around 1,300 people and left at least 2,800 injured. The quake struck about 78 miles west of the capital city, Port-au-Prince, destroying some towns and triggering landslides that have complicated rescue efforts. Aftershocks continued throughout Sunday.

President Joe Biden immediately authorized a U.S. response, naming USAID Administrator Samantha Power to coordinate efforts. A search-and-rescue team was immediately deployed, and the U..S. Court Guard has deployed helicopters. The Pan American Health Organization has sent in experts to help coordinate medical support. UNICEF has delivered medical supplies to hospitals that were most affected and provided supplies for 30,000 people.

The Haitian government—led by new Prime Minister Ariel Henry, sworn into the position after the assassination of Haitian President Jovenel Moïse last month—responded with several dozen rescue teams of military and civil protection staff. Still, they weren’t able to reach every area. “It’s the people from the neighborhood using their own hands who have been digging and rescuing anyone they can save,” said Jean-David Cassis, a farmer in the city of Torbeck on the southwestern coast. “Houses collapsed everywhere,” Cassis said. “It’s a very grave situation. […] People are still lying where they died.”

To complicate matters further, the National Hurricane Center forecasts that tropical depression Grace will cause heavy rains over Haiti through Monday and into early Tuesday, creating flooding and landslides. Early Monday, the storm was about 160 miles east-southeast of Port Au Prince, moving west at about 15 miles an hour with 35 mph maximum sustained winds. It’s not expected to gain strength but will dump at least several inches of rain, possibly as much as 10 or 15 inches in some areas.

There’s relief coming internationally and from

.@natemook leader of @WCKitchen in Miami on his way to Haiti with the help of @JetBlue with 81 Cambros enough to allow us to deliver over 16k hot meals at once! As we feed already today getting ready to increase the number of meals in multiple locations and cities! #ChefsForHaiti pic.twitter.com/hmgEe9rL1w

Haiti’s healthcare infrastructure and staff are struggling to respond, with hospitals among the destroyed buildings. Triage centers have been set up wherever possible, including at the airport in Les Cayes, where orthopedic surgeon Dr. Edward Destine was working, the only surgeon there. “I would like to operate on 10 people today, but I just don’t have the supplies,” saying there is an urgent need for antibiotics and equipment and supplies like intravenous drips.

Dr. Paul Farmer, co-founder of Partners in Health, said that the country and relief agencies had improved their ability to respond since the last major quake in Haiti in 2010. His relief agency oversees a handful of hospitals there. “The things we had at our disposal in 2010 versus now are night and day,” Farmer said. But he added the “old problems” of civil strife, political volatility, and criminal violence, as well as just bad roads and transportation, still plague efforts to respond.

There’s also a medical staffing shortage. Officials in Les Cayes, the center of the country’s western region, estimate that there are only 30 doctors in the entire region. Medical relief group Doctors without Borders has deployed personnel and supplies throughout the country.