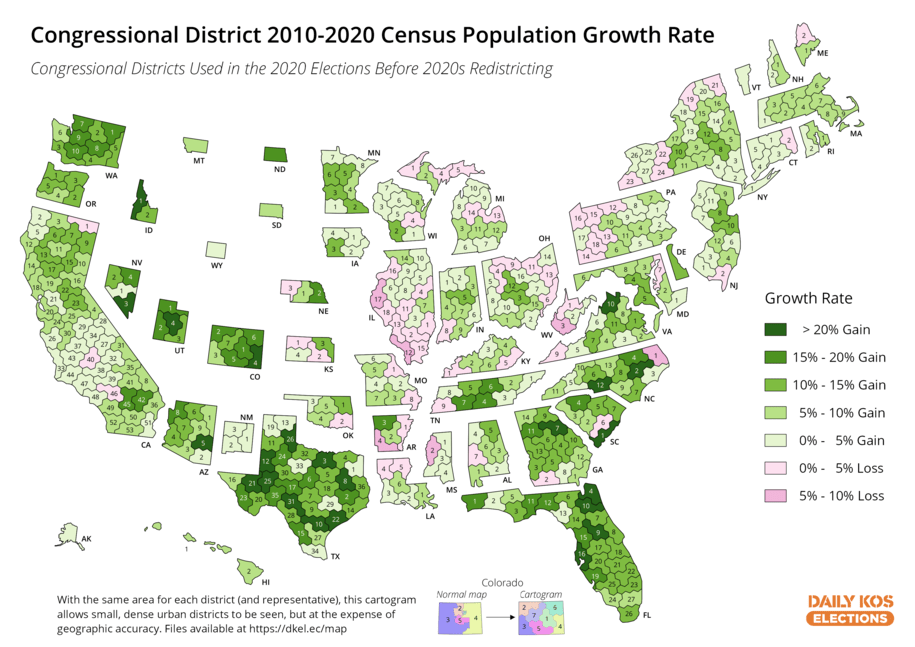 ● Census: Last week, the Census Bureau—after a lengthy delay—published every last scrap of data associated with the 2020 census, giving us precise population figures for each city, county, and congressional district in the nation. By comparing these new numbers with the results of the previous census a decade ago, we can know exactly how much every corner of the country has either grown or shrunk over the last decade.

This information will play a central role as states and local governments begin the once-every-10-years process of redrawing election districts in order to equalize their populations, which in turn will affect races for Congress, state legislatures, city councils, school boards, judges, and much, much more. Unfortunately, the Census Bureau’s interface makes pulling this data painful, to say the least, but thankfully, Daily Kos Elections contributing editor David Jarman has done all the hard work compiling these stats into one simple, accessible Google spreadsheet.

What’s more, Jarman offers an extended tour of all the biggest population changes at each level of government (including states), unearthing some intriguing and surprising trends along the way:

But there’s much, much more at the link, including maps, charts, and detailed discussions of the most salient facts that popped out from this new data. And if you don’t see your hometown, county, or district mentioned in the piece, you’ll definitely find it in our spreadsheet.

P.S. The map at the top of this post is a cartogram that shows each district as the same size, with an extra-large zoomable version here. If you’d prefer to see the same data on a traditional map, we’ve got that as well.

● FL-Sen: Two surveys were released Wednesday testing Republican incumbent Marco Rubio in a hypothetical general election match with Rep. Val Demings, the Democratic frontrunner, but they very much disagree on how competitive this contest is. The GOP firm Susquehanna Polling and Research’s poll for the betting site BUSR gave Rubio a 50-39 lead, while St. Pete Polls’ survey for Florida Politics had the senator ahead just 48-46.

● OH-Sen: Attorney Morgan Harper, who waged a well-funded but unsuccessful Democratic primary campaign last year against Rep. Joyce Beatty in the 3rd Congressional District, announced Wednesday that she would run for Ohio’s open Senate seat. Harper will go up against Rep. Tim Ryan, who has had the field to himself until now and enjoys the support of Beatty and a number of other influential Buckeye State Democrats.

Harper, who had worked as an advisor to the Consumer Financial Protection Bureau, decided last cycle to take on Beatty in a safely blue Columbus-area district. The first-time candidate, who was almost half Beatty’s age, argued that it was time for generational change and that the incumbent wasn’t doing enough for her seat.

Harper brought in a credible amount of money from fellow progressives but was still decisively outspent, and she got some more unwelcome news one day before the mid-March primary when GOP Gov. Mike DeWine, citing the quickly unfolding pandemic, haphazardly canceled it hours before it was to begin. The election was eventually moved to late April and Beatty, who had far more money left for the unexpectedly lengthened primary, enjoyed a massive spending edge over Harper in the final weeks. Ultimately, the incumbent turned back Harper by a 68-32 margin.

● UT-Sen: The conservative September Group, which is run by a former consultant for Sen. Mike Lee, has released a GOP primary poll from OH Predictive Insights that gives Lee 45% of the vote and shows none of his announced opponents taking more than 3%.

● AK-Gov: Independent Bill Walker announced Tuesday that he would run to reclaim his old job as governor of Alaska from his Republican successor, Mike Dunleavy, in next year’s top-four primary. Walker is the first notable contender to launch a campaign, though former Democratic state Rep. Les Gara formed an exploring committee last month.

As we recently detailed, Walker won his only term in 2014 by unseating Republican Gov. Sean Parnell in this red state after a truly unusual series of events. The biggest shift came around Labor Day when Democratic nominee Byron Mallott dropped out and became Walker’s running mate, which made the one-time Republican the de facto Democratic nominee. Parnell wasn’t prepared for his suddenly competitive race, and Walker ended up pulling off a 48-46 upset win.

Walker faced a tough four years in office thanks to a budget crisis from declining oil revenue, and he was a top GOP target early in the 2018 cycle. The governor’s road to victory got even tougher when former Democratic Sen. Mark Begich entered the race, which cost Walker the chance to benefit from Democratic institutional support. Ultimately, Walker dropped out weeks before Election Day and endorsed Begich following Mallott’s resignation in the face of a sexual harassment scandal, but this late development wasn’t enough to stop Dunleavy from prevailing the following month.

Walker launched his comeback campaign arguing that, while he wasn’t able to solve the state’s budget woes, the state dramatically reduced its deficit during his tenure. He also declared that Dunleavy had done a poor job in his place, saying that Alaskans didn’t know “about how much more from the university is going to be cut, how much more can be cut from the marine highway system and how government services will continue to decline.”

Unlike in 2014, when Walker appealed to Democrats by enlisting Mallot (who died in 2020) as his candidate for lieutenant governor, his running mate this time is a fellow independent, former Department of Labor and Workforce Development head Heidi Drygas. Still, the state’s new top-four primary rules, which will pit four candidates on one instant-runoff ballot in the fall of next year, gives Walker a path to victory even if a notable Democrat runs.

It’s also still possible that Dunleavy could face the voters earlier than 2022. The website of the bipartisan group Recall Dunleavy, which has been trying to launch a recall campaign against the governor since 2019, includes a tracker that says it has collected about 58,000 signatures as of late April, though it has not provided an update since then.

Recall Dunleavy has until early June of next year to submit the 71,000 valid petitions needed to force a recall election; if Dunleavy is removed from office early, he would be succeeded by his fellow Republican, Lt. Gov. Kevin Meyer. We haven’t seen any polls this year, though, to indicate if the governor is vulnerable in either a recall race or the regular 2022 contest.

● CA-Gov: Democratic Gov. Gavin Newsom’s campaign is running a new commercial arguing that a no vote in the Sept. 14 recall election is necessary to protect the state from the pandemic.

“With Delta surging, Gavin Newsom is protecting California,” declares the narrator, “requiring vaccination for health workers and school employees.” The ad then hits conservative radio host Larry Elder, who appears to be the GOP frontrunner, for having “peddled deadly conspiracy theories, and would eliminate vaccine mandates on day one, threatening school closures and our recovery.”

The spot is part of what the GOP firm Medium Buying reports is $2.42 million that Newsom’s camp is spending this week for TV and radio spots. Elder, by contrast, is deploying $744,000 on advertising during this time, while former San Diego Mayor Kevin Faulconer is dropping $333,000.

Yet another Republican contender, 2018 nominee John Cox, also earned national attention at Tuesday’s debate, though probably not in the way he’d like. Just as Cox began his introductory remarks, a private investigator working for the advertising firm Cox employed during his last race interrupted him, threw papers down to the candidate’s feet, and announced, “John Cox, you’ve been served; San Diego Superior Court order by the judge.” The investigator was immediately escorted out, and Cox picked up back where he left off.

Earlier this year, a San Diego judge ordered Cox to pay the firm almost $100,000 for alleged unpaid 2018 campaign fees and attorney costs, a bill the campaign disputes. Cox said after the debate, “​​It’s one creditor who didn’t get paid from the 2018 campaign because he didn’t deserve to be.”

● NY-Gov: The Republican firm co/efficient is out with the first Democratic primary survey we’ve seen that was completely conducted following incumbent Andrew Cuomo’s resignation announcement last week, and it finds soon-to-be Gov. Kathy Hochul leading Attorney General Letitia James 28-24 in a hypothetical contest; New York City Mayor Bill de Blasio, who was the only other potential contender named, is a distant third with 5%.

The poll also tested Hochul in a trio of head-to-head matchups:

There has been plenty of speculation about a James candidacy, but she’s said nothing about going up against Hochul. De Blasio, for his part, didn’t rule out taking on Cuomo before he resigned but doesn’t seem to have said anything since then, while AOC has shown no obvious interest in running for governor.

The pollster tells us this survey was done for a client, but that it was not conducted in support or opposition to anyone.

● VA-Gov: Republican Glenn Youngkin is out with a pair of ads (here and here) arguing that Democrat Terry McAuliffe would endanger public safety if he returns to the governorship.

McAuliffe quickly responded with a spot featuring several public safety officials declaring that during his tenure, Virginia was the “fourth safest state in America.” The Democrat’s supporters then say that Youngkin “has a budget plan that cuts hundreds of millions of dollars from law enforcement.”

● MO-04: Cattle farmer Kalena Bruce announced Wednesday that she was joining the Republican primary for this safely red open seat in west-central Missouri. Bruce, who owns a large local farm, went up with an announcement video that featured a 2019 clip of Donald Trump declaring, “Kalena, I want to thank you and all of those incredible people that you represent and just keep up the great work.”

Bruce, though, has not always been an unquestioning Trump supporter. In 2018, she wrote a Washington Post op-ed titled, “Farmers like me put Trump in office. Now his trade war is smothering us.” Bruce said that she very much remained a Trump backer who agreed that China “needs to be punished for stealing patented U.S. technology,” but she argued that Trump’s plan “is the economic equivalent of treating a hangnail by cutting off your finger.”

CT-SD-36: Republican Ryan Fazio defeated Democrat Alexis Gevanter 50-48 to flip this seat for the GOP. This is the first legislative seat to change hands in a special election this year.

While this district had been shifting favorably for Democrats, moving from a 54-45 win for Mitt Romney in 2012 to a 57-39 win for Hillary Clinton in 2016 (and likely a stronger showing for Joe Biden last year), it is far more competitive downballot. Former Democratic Sen. Alex Kasser won her bids here in 2018 and 2020 by just one and two points, respectively.

● Albuquerque, NM Mayor: Conservative radio host Eddy Aragon, who unsuccessfully sought the Republican nomination in this year’s special election for the 1st Congressional District, announced last month that he would run for mayor, and he’s since collected enough signatures to make the ballot. Aragon will face two serious Democrats, incumbent Tim Keller and conservative Bernalillo County Sheriff Manny Gonzales, in the November nonpartisan race. If no one secures a majority of the vote, the top-two contenders would advance to a runoff.

Cleveland.com’s Seth Richardson writes that, while White has “remained active in Cleveland politics behind the scenes,” he’s generally kept a low public profile since leaving office in early 2002. The former mayor used his announcement to compare the 33-year-old Bibb’s campaign to his own successful 1989 bid, arguing, “He checked all the boxes that that 37-year-old fella did on Jan. 25, 1989 when he stood on the steps of his parents’ home and said, “I want to be your 55th mayor.”