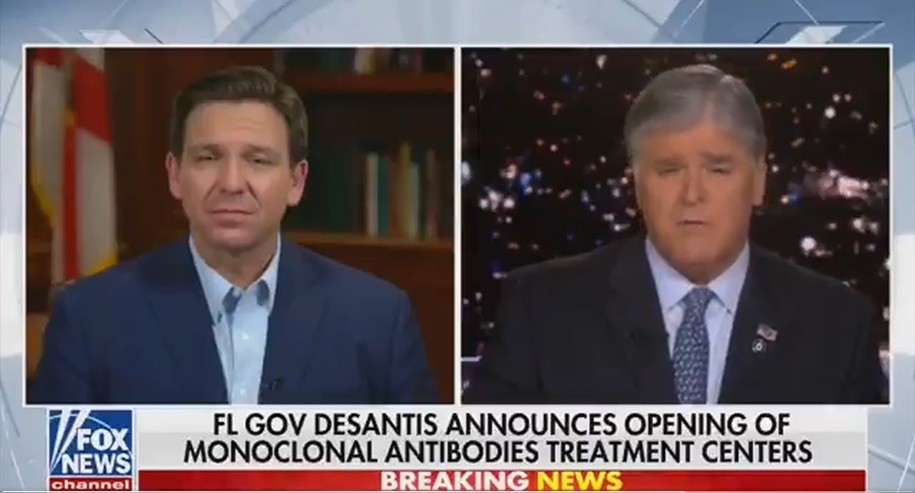 There’s a “crisis cycle” at Fox News, one that mirrors the behavior of the Republican Party writ large. In the wake of any display of destructive and/or outrageous behavior—the ‘Access Hollywood’ tape, Trump’s phone call to Ukraine, and especially January 6—someone at the network becomes the designated “reasonable guy.” Maybe it’s Brian Kilmeade musing from the couch. Maybe it’s one of Fox’s few alleged non-pundits delivering “straight news.”  In any case, the job of the reasonable guy is to keep a toehold in reality while Fox waits to see if their base will really go along with, say, mocking Gold Star families, demeaning prisoners of war, buddying up to dictators, or taking a dump on America’s allies. Once it’s clear that Fox’s base is more than happy to come along past the frontiers of whatever dark fantasyland Republicans are carving out at the moment, the reasonable guy can join everyone else in being unreasonable.

For the last few weeks at Fox, Sean Hannity has been perhaps the most unlikely, and unbelievable, reasonable guy. It’s been Hannity’s job to squirm a little uncomfortably while admitting things like COVID-19 is actually killing people, maybe the pandemic is not over, and especially to weakly wave a shy flag that reads “maybe you should get vaccinated.” This role had to be a whole lot of no-fun for someone who was previously free to frolic in the realms of Trumpian fantasy, and who often led the way on promoting the miracle cure of the week. Just the accusation that he was being a reasonable guy was enough to send Hannity into a fit of advanced pique, one in which he absolutely denied ever being reasonable.

But on Wednesday, Fox made it clear that this round of testing is over. In an interview with Florida’s pro-virus Gov. Ron DeSantis, Hannity scoffed at the idea that vaccines provide protection and joined in the latest Republican claim that a pound of cure is much better than any quantity of prevention. Now he’s free once again, free to swim the vast hydroxychloroquine, ivermectin, colloidal silver seas. And Fox can once again stop pretending that anyone there gives a damn.

In the midst of his conversation with DeSantis, Hannity whipped out a statement insisting that “the science shows the vaccine will not necessarily protect you. It’s not protecting many people.”

In Fox terms, the science is whatever they say it is. It’s not like Sean Hannity is going to cite a study, or interview a respected epidemiologist. And when he’s speaking with the guy whose campaign website still includes mugs, hats, and T-shirts saying “Don’t Fauci my Florida,” 700,000 cases after DeSantis first uttered that quip, the science is anything except the science.

Actual science—the kind of with data and analysis—continues to show that vaccines are tremendously beneficial. A survey of Texas hospitals on Wednesday showed that in a state where 55% of the population had been vaccinated, between 93% and 98% of those hospitalized for COVID-19 were unvaccinated. Those numbers correspond with CDC values nationwide, which continue to demonstrate that, even in the face of delta variant, vaccines remain at least as effective as original Phase 3 testing suggested when it comes to preventing severe disease.

But, of course, the purpose of Hannity’s kicking the facts in the crotch was to set up DeSantis to promote what the Fox host described as “monocolonial” centers. Which really does sound like something that Fox would seriously, seriously support.

However, monocolonial dreams aside, Fox supports DeSantis because he’s the designated heir to Trump. He, along with Texas’ Greg Abbott and South Dakota’s Kristi Noem, are the bannerfolk for leading the Republican Party into territory ever more extreme, more scornful of facts, and more willing to sacrifice man, woman, or child for a sweet, sweet dollar. Florida is open for business, y’all.

From the beginning of the pandemic, Fox has helped peddle supposed cures to COVID-19. The reason they’ve done this, and why Trump did this, isn’t difficult to determine. The idea is to downplay the threat of the virus and make it seem reasonable that people stay out there putting their necks on the line while the bosses sit back in safety and collect on their work.

While DeSantis’ offer to hand out Regeneron Pharmaceuticals monoclonal antibody treatment would seem to have more legitimacy than previous claims of a miracle cure, the truths are these: The Emergency Use Authorization (EUA) under which the treatment is available limits who can receive the treatment; its effectiveness in preventing severe disease is considerably worse than any of the major vaccines; and even if every one of Ron DeSantis’ infusion centers was running at full capacity 24/7, they could still only treat 4% of the people testing positive for COVID-19 in Florida.

As CNN reported on Wednesday, Fox News itself requires that every employee “report their vaccination status.” And while the company is cheering on Republicans who call for murder at school board meetings, behind the scenes they are “requiring employees to wear a mask in small, confined spaces with limited opportunities for social distancing and where there are multiple employees, including control rooms.” That’s the science that Fox actually believes in. It’s just not what they tell their followers on the air.

In fact, even though a study out of Israel has helped urge the CDC to authorize booster shots for all Americans eight months after their original vaccination, and even though everyone from The Washington Post to Forbes to me has been pushing that study as if it means vaccines efficacy begins a steep decline after half a year, there are reasons to think this decline may be less real than it seems at first.

An early-release study from the CDC, made available Wednesday (Aug. 18), shows that the effectiveness of vaccines against hospitalization in New York City remains high, even in the face of delta becoming dominant.

During May 3–July 25, 2021, the overall age-adjusted vaccine effectiveness against hospitalization in New York was relatively stable (91.9%–95.3%).

What has changed with delta is the odds of being infected, though even there the COVID vaccines remain extremely effective.  Vaccine effectiveness in preventing infection dropped from 91.7% pre-delta to 79.8% with delta as the primary variant.

When it comes to the study from Israel, there has been a tendency to mischaracterize that data going back more than a month, with many quick to jump on the idea of decreased vaccine effectiveness,  As the Associated Press reported in July, the information from Israel’s government-operated website was often cited without proper context and without acknowledging that the small numbers involved made it difficult to discern any real trends. And as The New York Times now reports, some experts remain leery of the idea that the data shows the kind of decline that news stories have been trumpeting.

What the overall data shows right now is that the vaccine in the United States remains highly effective in every way that can be measured. It’s extremely good against preventing infections, it’s even better at preventing severe disease. Both of those statements remain true over eight months after the vaccine first became available and despite the prominence of the delta variant.

The CDC’s decision to authorize booster shots shows an agency, and a government, operating out of an abundance of caution. President Biden is determined not to repeat the mistakes of TFG and to provide long-term, high-level protection to the population—or at least, to that part of it willing to listen to … what’s that term again? The science.