Evacuations continue from Kabul, President Biden to address the nation on Friday 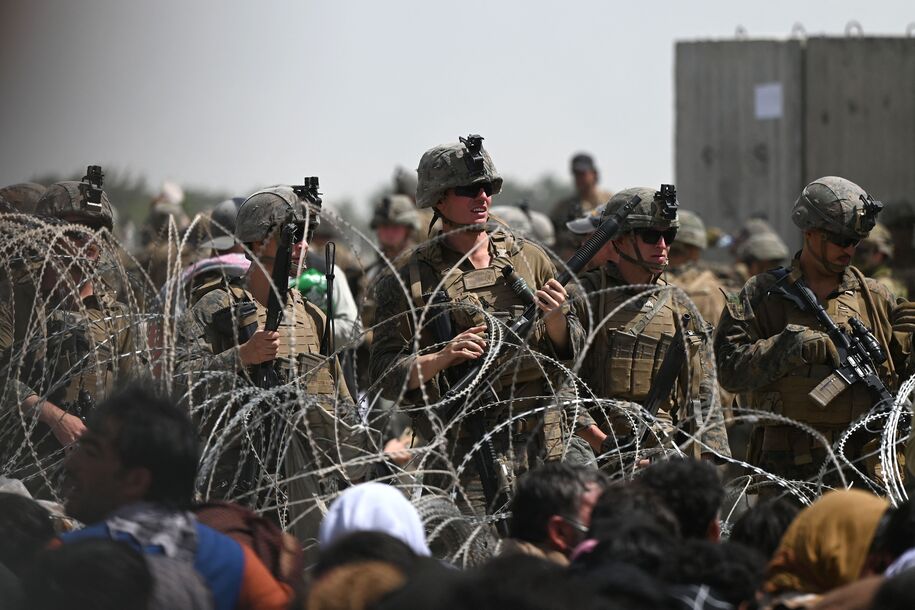 On Friday afternoon, President Joe Biden will speak to the nation on the still-unfolding situation in Afghanistan. Daily Kos will carry live coverage of Biden’s address beginning at 1 p.m. Eastern Time.

Military evacuation flights continue to shuttle Americans, allies, and Afghans seeking to leave the country out of Afghanistan. Many of these flights take evacuees to facilities in nearby countries to make as many trips into Kabul as possible.

Many U.S. flights had been directed to Doha in Qatar, but with increasing crowding at those locations, CBS News reports that the U.S. has now secured permission to begin staging evacuees at Isa Air Base in Bahrain. German planes have been evacuating people to Tashkent in Uzbekistan. At each location, military and State Department workers are scrambling to take care of those arriving from Afghanistan, getting citizens on to the next flights, and working out how to handle Afghan refugees. None of these stops are meant to be permanent destinations.

Additional State Department diplomats headed into Afghanistan on Thursday and Friday to help coordinate those on their way out. U.S. Ambassador to Afghanistan Ross Wilson remains in Kabul to work with the Taliban, if possible, to protect those still moving toward evacuation.

U.S. forces continue to hold the military section of the Kabul airport. However, many of those seeking to leave Afghanistan report that they’ve been unable to reach the airport. CNN reported on Thursday that at least one former military translator was trapped in Kabul after spending eight hours trying to reach the airport. Even those who do arrive to the airport can be in for long waits in a facility where water and even shade are in short supply. Some Afghans have reportedly been waiting on the tarmac for over two days.

But as the media continues to play up reports of chaos in Afghanistan and to wonder how things fell apart so quickly, it’s not just the intelligence reports that are coming into question but also the media’s honesty in dealing with the situation.

As journalist and author Eric Boehlert points out, it’s not as if the networks had displayed much interest in Afghanistan until they could get nice crowd shots around the airport. When it comes to the time that the broadcast networks devoted to stories about Afghanistan—any topic in Afghanistan—the average scores since 2015 were ABC 16, NBC 16, and CBS 25. Those are in minutes per year. Not one network gave America’s ongoing war in Afghanistan one crime drama’s worth of coverage in total over a period of five years—and that’s even when rolling in uplifting stories about the women’s soccer team and female entrepreneurs in Kabul.

Naturally, newscasters are not the military or the intelligence community. They’re not responsible for the clearly failed analysis of how rapidly the Taliban would advance, or the equally flawed planning for how Americans and allies could be evacuated. However, they are the filter through which many are now seeing these events. The incredibly light attention to the situation in Afghanistan should lend a great deal of caution when listening to instant experts reporting on the scenes.

Whether reports are talking about a kinder, gentler Taliban 2.0 or about chaos in which the Taliban are beating Americans, everything coming out of Afghanistan at the moment—other than refugees—needs to be met with a degree of skepticism.

As Marcy Wheeler writes at emptywheel, journalists looking for a quick story are “getting suckered by ass-covering sources” who want to make it seem as if they, and they alone, had the insight to predict what was going to happen. As an example, Wheeler points out a Wall Street Journal article that inverts the order and nature of events to make it seem as if low-level State Department officials had an inside scoop while those above them, including Secretary of State Antony Blinken, were blindsided by events. But getting there requires drawing conclusions that ignore even the content of the article itself. But the WSJ, like many media outlets, is more interested in packaging up a nice story of how the Biden administration screwed up than accurately covering events.

“I get that such stories—suggesting that Biden ignored warnings and so owns this collapse—will drive a lot of traffic. Biden does own this collapse, along with Trump, Obama, and (especially) George Bush. But he owns it because of stupid decisions made 18 months and 18 years ago, not the efforts he made in July to mitigate the aftermath of those earlier decisions.”

There is a stack of people, particularly on the right, rushing forward to say “I told you so” at this point, and a stack of media outlets, not necessarily on the right, eager to give them opportunities to repeat those claims. And the result is a lot of extremely sketchy claims getting extremely credulous reporting.

And, of course, there’s this.

If we leave any Americans behind, or if we leave thousands of Afghans who fought bravely alongside us behind, President Joe Biden deserves to be impeached for a High Crime and Misdemeanor of Dereliction of Duty.

This is exactly why Lindsey Graham called for the immediate impeachment of Donald Trump when he deliberately and callously abandoned Kurdish allies who had fought side by side with Americans for two decades. Except, of course, that he didn’t.

But don’t expect Graham to be the only one.