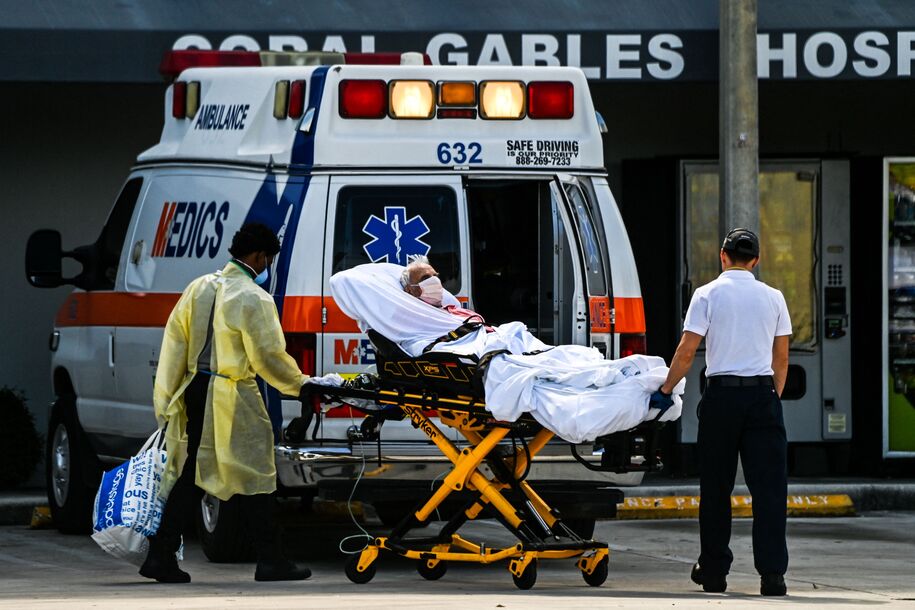 Between the first of July and August 15, the United States recorded over 3.2 million new cases of COVID-19 as the delta variant became dominant and drove a new surge in the lingering pandemic. Over this period, the nation also suffered 19,165 further deaths from COVID-19. Every one of those is a tragedy. But that 0.60% case fatality rate is much lower than what was experienced in previous surges. By contrast, a similar period of the winter surge saw a 1.05% rate of fatalities, the one the summer before had a rate of just over 2%, and the first surge in spring of 2020 had a shocking fatality rate above 4%.

None of this represents evidence that the virus behind COVID-19 is becoming weaker over time. All indications are that the alpha variant behind the winter surge was more virulent than the initial version circulated in the United States. The delta variant that dominates now is even more dangerous. What changed between the first surge and the end of 2020 was a better understanding of how patients should be treated, with the most significant effect coming not from one specific drug or therapy. It’s from a better understanding of when to apply treatments such as steroids and how best to deal with intubated patients. If patients had not received treatment—if the curve had not been flattened and patients across the nation had faced full hospitals, inadequate treatment, and a shortage of ventilators—the rate of deaths would have been tremendous. It easily would have exceeded 5%. It might well have been closer to 15%.

What did every lockdown, social distancing restriction, and mask mandate buy us? Million of lives, that’s what. Millions.

But the case fatality rate between the winter spike and the delta wave is different in large part not because of improved treatment, but because the statistics are being “watered down” by people who stand a much smaller chance of getting seriously ill—those who have been vaccinated. And while the numbers are low even in the worst states, some interesting values stand out.

The five states that have had the most cases of COVID-19 since the beginning of the pandemic are California, Florida, Texas, New York, and Illinois. That’s not surprising since the first four of these states are the four largest in the nation by population. Illinois, which is number six by population, edged out Pennsylvania primarily because of its many cases in that initial surge.

If you look overall at these five states, their overall case fatality rates look like this:

More than anything else, these overall case fatality rates show when these states had the majority of their cases. The initial wave hit New York and Illinois hard; then, our understanding of the disease, prevention, and treatment was at its worst. New York, in particular, showed an enormous rate of fatalities in the first two months of the pandemic. Those numbers dropped sharply as health care workers across the nation (and world) gained knowledge and experience.

But what’s interesting is to look at how those numbers compare to the current delta wave. The following chart looks at cases and deaths between July 1 and August 15 (that cut-off date is mandated by how Florida has changed its reporting methods, making the last few days of their table inconsistent with other states).

Nationwide, the numbers over this period put the rate at 0.60%, with Illinois matching that average value. Of these five large states, Texas and Florida both “overperform” when it comes to killing their citizens, with Texas topping the national average by 35%. Texas manages actually to double the rate in New York.

Taking vaccination out of the equation to look at the effects of other policies is difficult. Neither Texas nor Florida publishes detailed data that would allow positive cases, hospitalizations, and deaths to be compared between vaccinated and unvaccinated groups. States that publish such data have seen the rate of positive results among the vaccinated increase from 8% to nearly 20% over this period. Those breakthroughs are also occurring in situations where case counts are lower and a larger percentage are vaccinated, so it’s unclear how any of that would map to these states.

It is clear that while California may also be seeing an average of over 13,000 cases a day in the latest surge, its fatality rate is much lower. The fatality rate for the unvaccinated in Texas and Florida appears to be, at best, no lower now than it was over the winter. Other states are improving the survival rate of their citizens by providing vaccination. Texas and Florida are floundering.

What’s killing people now in Florida and Texas is simple: Policy. Both Gov. Ron DeSantis and Gov. Greg Abbott have been pushing the idea of using scarce and costly monoclonal antibodies as if they are a panacea to COVID-19 while blocking businesses and schools from requiring vaccination or masks. Those policies are reflected in rates of death that are significantly higher than in other large states.