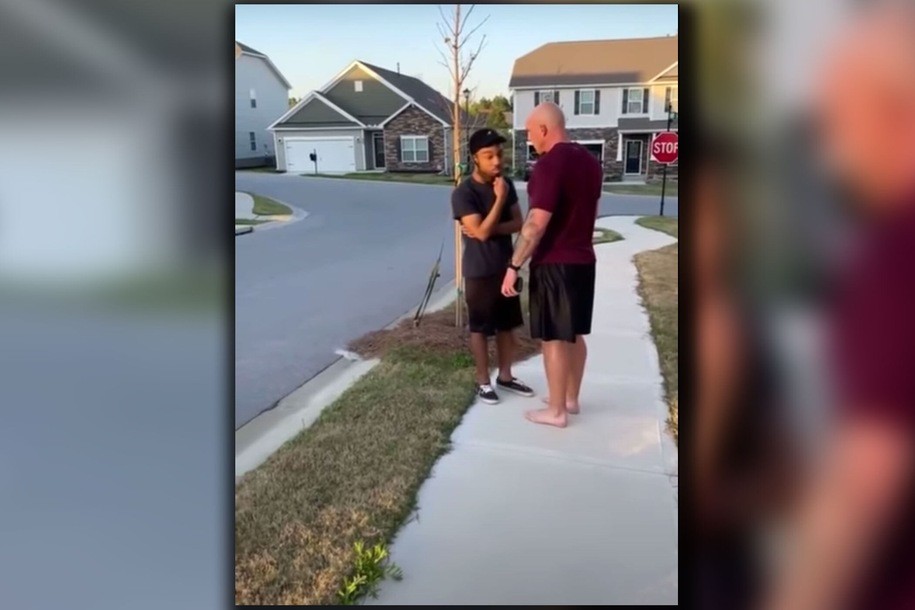 A noncommissioned Army officer has been convicted of third-degree assault after Twitter users identified him as a violent man harassing a Black man in a viral video. According to the Associated Press, a magistrate judge found Fort Jackson Army Sgt. Jonathan Pentland guilty of the misdemeanor Monday following a two-day trial. Pentland will have the option of choosing 30 days in jail or a fine of $1,087.

The incident occurred in April when Deandre Williams was walking in his own neighborhood in South Carolina. Pentland approached him unprovoked and began threatening him with violence. Amid other aggressions, Pentland threatened Williams, claiming: “You’re in the wrong neighborhood, motherfucker.” Video footage of the incident posted to Facebook quickly became viral.

During his trial, Pentland claimed he was trying to protect his family from a man acting strangely. However, the video footage shows otherwise. In the video, Pentland is seen yelling at Williams as Williams remains calm and explains he lives in the area. Pentland even gets physical and threatens Williams, shoving him and breaking his phone. “You can walk away or I’m going to carry your ass out of here,” Pentland said.

Even the officer who arrested Pentland testified that the video of the confrontation spoke for itself. Pentland’s body size was even brought up as he weighs at least 100 pounds more than Williams and can be seen towering over him while yelling.

I went for a walk yesterday evening and I encountered a young man (Deandre)in distress. I decided to record the incident in order to protect this black man from possibly becoming a statistic pic.twitter.com/fdgfAmc6zb

Williams noted that he was trying to avoid confrontation and was merely walking when he was approached by Pentland. “As a young man, if I go on a walk, I shouldn’t feel any form of pressure,” Williams said after the verdict.

While race was allegedly never mentioned during Pentland’s trial, the video became symbolic in depicting racial issues, the AP reported.

Williams’ father cried on the stand as he testified. According to the AP, his father shared that his son had a form of cancer that caused his brain to swell two years ago and as a result has been struggling to understand things since.

According to prosecutor Paul Walton, Pentland broke the law three times: once when he shoved Williams before the video started, the second time when he shoved him again when Williams allegedly took a step toward Pentland’s wife, and then lastly when he slapped Williams’ cellphone out of his hand as Williams attempted to record Pentland.

“His pride is hurt,” Walton said of Pentland, according to the AP. “He’s a drill sergeant and he’s used to people doing what he says.”

But of course, instead of acknowledging the wrong he did, Pentland stood strong in the claim that he was right to act the way he did. He claimed that his strong language was a result of his military training to deescalate situations and a defense mechanism from fear his family would be hurt. He said he was acting in self-defense and not “trying to pick a fight.”

“It’s embarrassing to the community,” Pentland said. “I’m sorry for the way it escalated. Anybody looking back at this, you can watch that video and 100% see that it looks worse than it is. I did what I felt I had to do to protect my friends and family.”

His lawyer argued that the two-minute video shared on social media was only a portion of the confrontation that took place over 20 minutes and that instead of investigating the incident, officers arrested Pentland.

“They didn’t want the truth. They wanted to make up a bully for TV’s sake,” defense attorney Benjamin Allen Stitely said. Stitely claimed that there were 911 calls about Williams’ behavior that were disregarded.

After the video went viral, protesters began appearing outside of Pentland’s home, Daily Kos reported. Pentland alleges that in addition to these protests outside his home, he has received “thousands” of death threats, which have resulted in his wife having to find a new job and his daughter finding a different school.