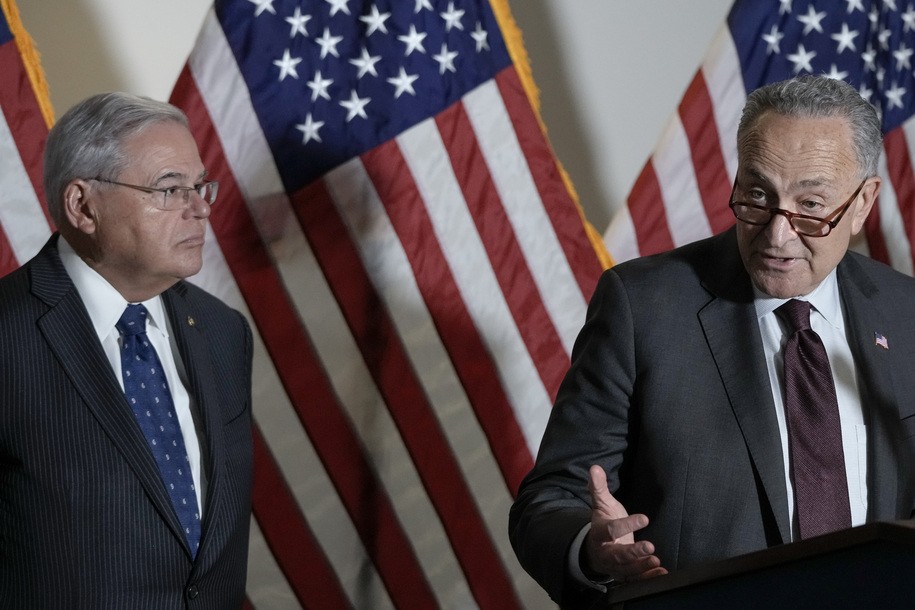 A letter from a coalition of senators led by Majority Leader Chuck Schumer and Foreign Relations Committee chair Bob Menendez has become the latest condemnation of the Biden administration’s mistreatment and mass deportation of thousands of Haitian asylum-seekers and migrants under the Stephen Miller-pushed, unsound Title 42 policy.

“We write to add our names to the groundswell of voices expressing outrage and disappointment over the cruel treatment of Haitians at our border, and their summary deportations,” the senators wrote to Department of Homeland Security (DHS) Sec. Alejandro Mayorkas and Sec. of State Antony Blinken in an Oct. 8 letter. The letter also marks the second time Schumer has slammed the treatment of Haitians in official remarks.

Senators write in the letter to Mayorkas and Blinken that Haitians at the border “were summarily expelled and deported without best interest determinations for children or screenings for international protection concerns.” Families quickly deported included “children who had never even been to Haiti,” senators noted. In the letter they ask the Biden administration to “ensure that Haitians presenting at the border are able to apply for asylum.”

While the letter calls on the Biden administration “to establish a reintegration program for returnees, and to work with partners in the region to ensure that Haitians living outside of their homeland are afforded access to protection, assistance, and information about their rights,” Black immigration groups that recently filed a civil right complaint have further called for the return of Haitians who were quickly and unjustly deported, in violation of their rights.

That complaint cited “verbal abuse and physical violence/intimidation,” denial of access to interpreters, and denial of peoples’ “statutory and international law rights to apply for asylum,” The Grio reported.

Senators also call for the appointment of a new Special Envoy for Haiti, following Daniel Foote’s resignation in September after just weeks in the job. Foote left the position “in protest of ‘inhumane’ large-scale expulsions of Haitian migrants to their homeland,” the Associated Press reported. “Our policy approach to Haiti remains deeply flawed, and my policy recommendations have been ignored and dismissed, when not edited to project a narrative different from my own,” he wrote. While the resignation was not directly due to Title 42, former State Department official Harold Koh also slammed the policy before leaving his position several days ago.

“I believe this administration’s current implementation of the Title 42 authority continues to violate our legal obligation not to expel or return (‘refouler’) individuals who fear persecution, death, or torture, especially migrants fleeing from Haiti,” his memo stated. Koh wrote that his “concerns have only been heightened by recent tragic events in Haiti.”

“Ensuring the integrity of U.S. borders is of utmost importance, and is not incompatible with the fundamental duty to respect the dignity, humanity, and rights of all individuals seeking entry to the United States,” the senators continued in their letter. In recent weeks, four U.N. agencies also appealed to “countries in the Americas” to “uphold the fundamental human rights of Haitians,” urging them to “refrain” from deporting vulnerable people “without proper assessment of their individual protection needs.” More listening to the U.N., and no listening at all to Miller.

“We reiterate our call for the Biden administration to act swiftly in appointing a new Special Envoy for Haiti, and to work with our international partners throughout the region to find immediate solutions that places the protection needs of Haitian migrants and the long-term stability of Haiti at the core of our approach,” the senators continued. Joining Schumer and Menendez in signing were Ron Wyden, Cory Booker, Pat Leahy, Richard Blumenthal, Ed Markey, Ben Cardin, Sherrod Brown, Jeff Merkley, Tammy Duckworth, Elizabeth Warren, Raphael Warnock, Alex Padilla, Bernie Sanders, and Michael Bennet.