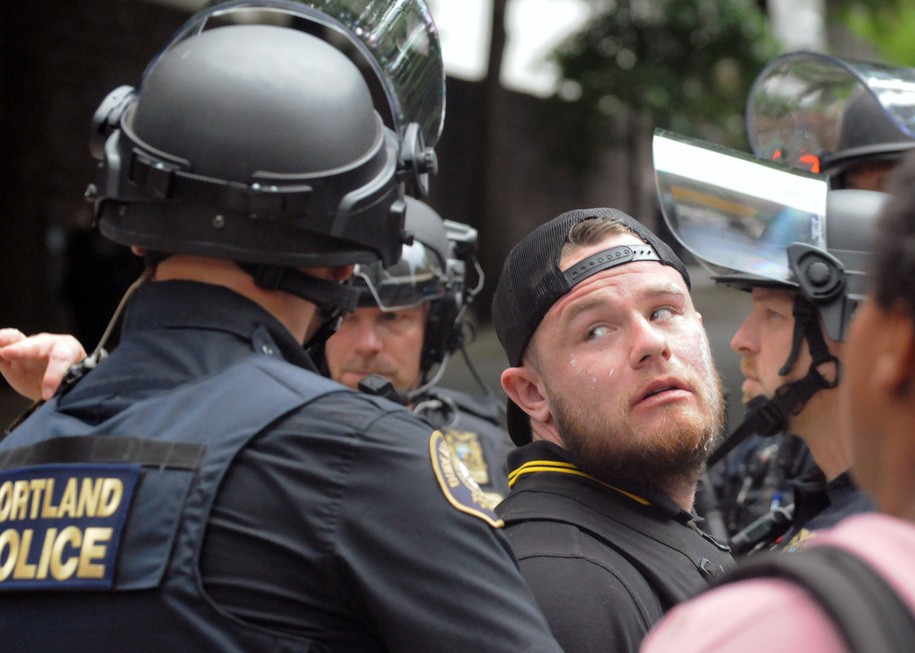 It turns out that when arresting some of the participants in the Jan. 6 insurrection, police departments have been using SWAT teams and similarly heavily armed teams to do the actual arresting part. It also turns out that the rabid militia members, Proud Boys, and similarly armored-up seditionists only too eager to end democratic rule in America to appoint Donald Blowhard Trump their god-king do not like that, so we’re all going to hear about it. Everybody got their tiny, tiny bows ready? Well rosin ’em up, because it’s time for a symphony. I call this one Dirge for a Paramecium in E Minor.

Politico brings us this story, in which we learn that Proud Boy leaders and other quasiprofessional militants have been moaning to willing far-right, pro-Trump “news” outlets that the circumstances of their arrests have been very very mean, with battering rams smashing in doors and “people who looked like stormtroopers” pointing “M4 weapons” at them.

We also learn that law enforcement has been using this level of force when attempting arrests specifically of insurrectionists who “displayed body armor or other armament” during their participation in the attempt to topple government, and that the folks complaining are prominent members of militia groups and the aforementioned “Proud Boy” violence-seekers. In other words, law enforcement is deploying substantial force against those who have already shown that they own militia equipment designed to fend off police raids and/or have membership in a militia group that has advocated for violence against the government based on some twitchy-fingered bozo’s definition of “tyranny.”

Yeah, you can see why arresting officers are going to take every possible precaution when coming to arrest those sedition-minded thugs. These are folks who have premised their identities on being willing to attack government figures, and who proved capable of carrying out such attacks during their crime spree in the U.S. Capitol. You bring body armor to a supposedly “peaceful” march intended to intimidate Congress into ending democracy rather than abiding an election you don’t like, you’re going to get put on a special FBI list in honor of your devotion.

What Politico does not bring us is anybody not affiliated with Team Treason who has a problem with this, even among policing reform groups with the very purpose to combat excessive use of force by now-militarized police departments. Arresting violent would-be terrorists is the very premise of this nation’s many, many SWAT teams. It was the reason for slapping them together in the first place, after pro-gun advocates succeeded in creating a new generation of criminals decked out in equipment capable of murdering dozens in the span of a minute.

If you show up in the U.S. Capitol with body armor, a weapon (makeshift or otherwise), membership in a militia premised on someday using violence against the government, and a goal to find lawmakers so that you can use force to oblige them to overturn government on your behalf, then yeah. It stands to reason that when the FBI comes to haul you in, you’re going to find yourself facing two dozen heavily armed officers fully prepared for you to Try Some Shit.

Nobody cares. You wanted to take on the government, here ya go. Home delivery and everything.

The problem with heavily armed special policing teams is not that they exist—the National Rifle Association’s insistence on militarizing individual Americans according to their own paranoias all but necessitates such teams at this point. The problem with SWAT teams and other paramilitary policing units is that there are extraordinarily few circumstances that actually require them, and a great pressure to use them and their tactics for everyday police work, potentially subjecting any random civilian they run across to paramilitary tactics after a traffic stop, or when serving a warrant, or during peaceful protests demanding that fewer people be murdered in the first two cases.

This, though? This is the reason those teams exist. If Joe Oathkeeper or Timmy Threepercent is a leader in a group that advocates for killing people in government they don’t like, law enforcement is right to consider them dangerous enough to require a maximal response. That is what participating in a violent act of sedition can be expected to bring you. Whining that the government you tried to overthrow is being mean to you by pointing guns at you in response isn’t worth even a blown raspberry in response.

There have been multiple attempts to rehabilitate the most violent members of the insurrection, whether it be Donald Trump’s continued praise for the attacker shot dead by law enforcement that day or Republican lawmakers’ repeated insistence that the crowd responsible for a three-figure number of assaults on defending officers was just a group of patriotic tourists. This one, however, is going to be hard to make stick. Militia leaders who have dedicated their very existence to drumming up support for murdering government officials look like petulant little assholes when they whine that the government pointed too many guns at them during their arrests, and it’s hard to project tough-guy pro-murder gravitas while sniffing about people being rude you you. Get bent.

We’ll go on the record on this one. Yes, it is absolutely appropriate for the FBI and local police forces to turn to their most heavily armed, most meticulously trained teams for arresting violence-peddling militia twits who participated in a violent attack on the U.S. Capitol. For serving a random, run of the mill warrant? No. For this? Absol-freakin-lutely.