Jim Jordan and Matt Gaetz walk into a committee hearing to defend Steve Bannon, it does not go well 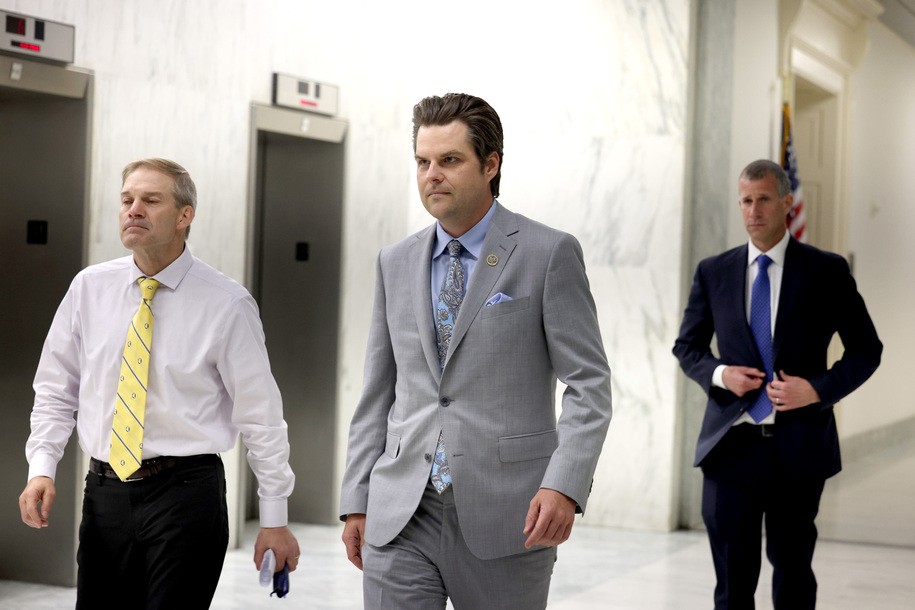 On Wednesday, the House Rules Committee met to vote on whether the recommendation for charges of criminal contempt against former Trump campaign chair and Jan. 6 conspirator Steve Bannon would be forwarded to the full House. At the end of the hearing, the committee voted along party lines, which means that the full House could vote to drop Bannon’s file on the Department of Justice by Thursday.

Despite the party-line vote, with every GOP member on the committee voting to surrender Congress’ power to conduct any form of executive oversight, there was at least one Republican present who disagreed. That’s because the vice chair of the House Select Committee, Liz Cheney, sat down to explain what makes Bannon’s documents and testimony vital. According to Cheney, it appears that Bannon “had substantial advance knowledge of the plans of January 6 and likely had an important role in formulating those plans.” And, more than anything else, Bannon simply, “has no legal right to ignore the committee’s lawful subpoena.”

That last point seems like something that should gather universal support from any member of Congress. After all, if it’s not possible to subpoena someone who worked for a former administration, and who holds no official position, exactly how much power does Congress have to compel testimony from anyone? But that reasonable position ignores the fact that the party known as the GOP party is actually the TOT party—as in Terrified Of Trump. So Republican leadership gave all members the word before the hearing to cast their inconsequential votes in favor of a powerless Congress.

But before that vote was cast, the committee had to listen to two defenders who charged in to uphold the right of Steve Bannon to plan the downfall of the nation and thumb his nose at consequences: Reps. Matt Gaetz and Jim Jordan. And that appearance … was kind of hilarious.

Calling in Jim Jordan to defend Steve Bannon over his involvement in Jan. 6 is like calling in the Zodiac Killer to defend Jack the Ripper. That’s because, back in August, Jordan admitted that he had talked to Donald Trump on Jan. 6. But exactly when that call took place wasn’t exactly fresh in the congressman’s mind.  “After?” said Jordan “I think after. I don’t know if I spoke with him in the morning or not. I just don’t know … I don’t know when those conversations happened.”

“Conversations” being the key word here. Because, as Politico has since made clear, there was more than one call between Trump and Jordan in the middle of that little insurrection thing.

“Look, I definitely spoke to the president that day. I don’t recall—I know it was more than once, I just don’t recall the times,” Jordan told Politico reporter Olivia Beavers. At least one of these calls apparently came after Congress members had been moved to a secure location, and since Jordan said that he, “like everyone” wanted the National Guard to get involved, that would be a very good sign that this call took place very much during the attack on the Capitol. Whether the second call also took place from this “secure location”—and whether there were only two calls—remains unclear.

But there is something else that is known about that call: Jordan wasn’t alone. Someone else was listening in as he talked with Trump.

After a group of lawmakers were evacuated from the House chamber to a safe room on Jan. 6, Jordan was joined by Rep. MATT GAETZ (R-Fla.) for a call during which they implored Trump to tell his supporters to stand down, per a source with knowledge of that call. The source declined to say how Trump responded to this request.

So, the two men who were in the room on Wednesday begging the House Rules Committee to give Steve Bannon a waiver, were the same two men who spent Jan. 6 talking to Donald Trump during an active attempt to overthrow the government. Which makes Jordan’s efforts to dodge questions about that call today more worthy of a world-class eye roll.

Jim Jordan is asked AGAIN today specifically when and how many times he spoke to Trump on J6. Again he deflects, wiggles, hems, haws, and refuses to answer the question. pic.twitter.com/9GwxaWDoqD

In his reply, Jordan insists that his call with Trump happened after the attack. But if it did, this was clearly a later call, because a call made while huddled in the House safe room was definitely not “after.” Jordan seems to recognize this, waffling around the idea of whether there was more than one call and in general trying to summon a semblance of being insulted by the question.

But that moment doesn’t come close to the too-toasty-for-s’mores immolation applied by Congresswoman Norma Torres—a moment that could serve as a model for how to deal with either of these men on any occasion.

With Gaetz and Jordan showing up to try and disrupt the hearing, Rep. Torres throws greatest shade ever at them: “This is not about somebody paying to have sex with a young girl, or somebody not protecting people that are under their jurisdiction. This is about our democracy.” pic.twitter.com/kBramkbrTI

Gaetz is certainly looking at plenty of legal action of his own in the near future. Jordan should be. But maybe this will help: During his reply, Jordan said that he “did not speak to the president during the attack.” That seems like something that could warrant a subpoena right there.