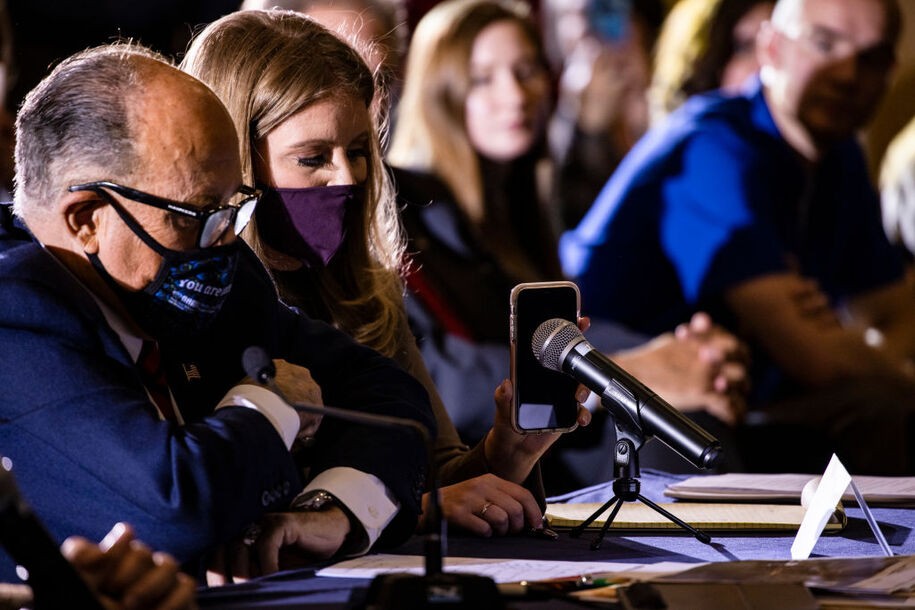 Days after it became clear that President Joe Biden had wiped the floor with Donald Trump in the 2020 elections, the Trump campaign began suing everybody—or at least trying to. With the Trump campaign saying, “The election is not over!” in Pennsylvania, Michigan, and Georgia, it took only a couple of weeks for federal judge Nicholas Ranjan—appointed by Trump himself—to throw out this anti-democratic and frivolous lawsuit in Pennsylvania. During, and even after, that time, Trump and his minions spewed lie after conspiratorial lie, claiming everything from voting machines were controlled by the ghost of Hugo Chavez to working individuals were secretly complicit in massive voter fraud.

At the end of October, James Savage filed a 60-page lawsuit naming as defendants Donald Trump, Rudolph Giuliani, Jenna Ellis, and the Thomas More Society, along with other Trump backers. Savage, the voting machine warehouse custodian in Delaware County, PA, says he suffered permanent damage to his reputation. The stress Savage was under from being accused of “false statements and insinuations” that “have depicted Mr. Savage as a dishonest criminal” led to Savage suffering two heart attacks—while also fearing for his life and the safety of his family.

The Kraken team of suspected criminals targeted Savage. According to Savage’s complaint Giuliani, Powell, Ellis, Trump, and others “falsely accused him of uploading 50,000 votes for Joe Biden.” The focus by Trump and his team on election officials led to people like Savage being attacked as election fraud puppeteers.

But the important thing to remember here, and the reason why this is a lawsuit, is that the allegations made against people like Savage were very obviously false. The insinuations made against them belied the jobs and the protocols and access they had in their positions. And this, according to the complaint, is proof that Trump and his craven cauldron of immoral mushheads knowingly lied.

The lawsuit points directly to the infamous Gettysburg hearing where Giuliani and Ellis made fabricated claims of election fraud in the state of Pennsylvania. So much fraud that Giuliani said it had “several dimensions to it.” It didn’t, and he has never even been able to produce a shred of evidence indicating otherwise. The hearing included the refrain that when people went to bed, Donald Trump was up by a lot of votes, and when they woke up—and the more urban democratic, considerably denser areas of the state had had its votes counted—Donald Trump had lost by about 80,000 votes.

The MAGA crowd’s insinuation is the same one they have made for mask mandates and anti-vaxx hesitancy: one that plays ignorance of how numbers, scale, math, and all things in the world work. To take advantage of this high level of low comprehension, Trump’s election fraud con artists threw out every possible way that 50,000 or so votes could suddenly appear… outside of the usual way in which they appear, which is they are counted, collected, and then officially stated.

One of those ways was to say that people like James Savage were not trained and should not have been allowed to upload votes to the official tabulations records. Like all cons, this is partly true. Savage’s job as warehouse supervisor meant he was not trained or experienced in “uploading votes.” That’s because he doesn’t do that and never has. He’s not allowed to. It isn’t his job. He doesn’t have access to equipment or processes for “uploading votes,” so, even if he ever imagined uploading votes,” he would literally not be able to do so.

As the suit states: “Every Defendant herein at the Gettysburg public meeting on November 25, 2020, was aware that any suggestion that the Plaintiff could upload votes for influencing tabulation purposes was impossible.”

In the suit, Savage was also called “a Berbue Sanders delegate,” and the “only voting machine warehouse supervisor in Delaware County.” Strange that Bernie didn’t get even ten percent of the votes Biden got in the Delaware primary. The attorney for Savage told the Washington Post that “his client is seeking a jury trial on charges of defamation, civil conspiracy, and false light invasion of privacy, as well as monetary damages up to $50,000.” For his part, Savage received death threats and was harassed relentlessly.