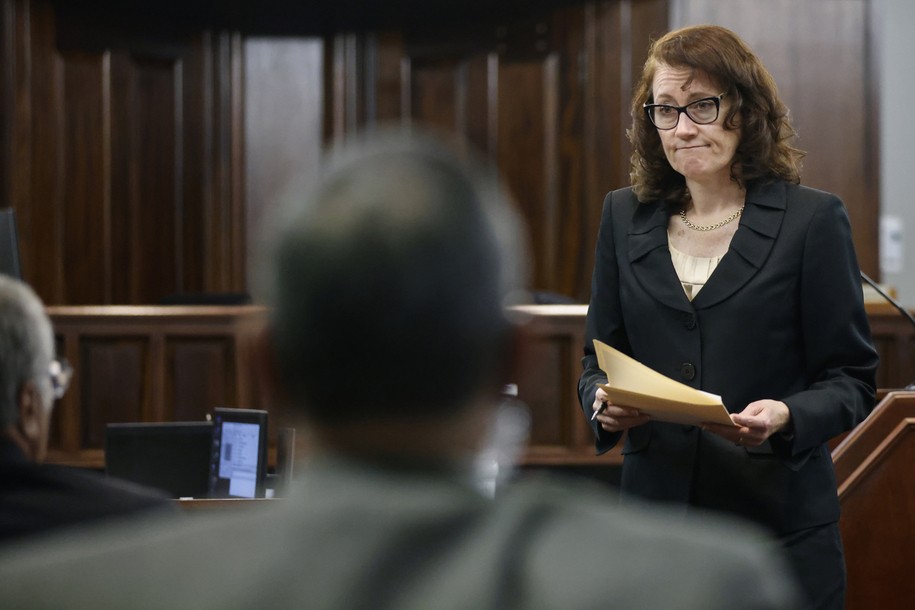 After a delay, the opening statements in the murder trial for the three men who killed Ahmaud Arbery were heard Friday morning. Arbery, a 25-year-old Black man, was chased, attacked, and killed while on a run in the Satilla Shores neighborhood of Brunswick, Georgia. The three white men on trial include Gregory McMichael, his son Travis McMichael, and their neighbor William “Roddie” Bryan Jr. In addition to being charged with malice, felony murder and aggravated assault, false imprisonment, and criminal attempt to commit a felony, the three men have been indicted on federal hate crime charges and attempted kidnapping, CNN reported.

All three men pleaded not guilty, with the McMichaels claiming they were conducting a citizen’s arrest and acting in self-defense; Bryan claims he took no part in the killing.

Travis McMichael’s defense attorney opening by claiming that “This case is about duty and responsibility.”

Throughout his opening statements, attorney Bob Rubin emphasized that Travis McMichael was military trained, and attempted to use this as part of his defense as to why he shot Arbery.

He continued to speak about “probable cause,” emphasizing Travis McMichael’s training as explanation for why he would shoot Arbery. Rubin also tried to paint his defendant as a family man, emphasizing he was a father and had no choice but to shoot. Before the court took another break he spoke of “self-defense,” explained what it was, and tried to paint Arbery as a threat.

Defense opening arguments continue with the second defense attorney representing Gregory McMichaeld. He attempted to paint Arbery as a ​​burglar, claiming he was seen in the neighborhood at least 12 days before the murder.

The attorney emphasized the words “intent, knowledge, belief,” claiming these justified the defendants’ actions. He also used the term “good reasons” as an excuse as to why the McMichaels killed Arbery. He claimed they had “good reasons to believe this young man Ahmauud Arbery had been in this house where things had been taken…. Good reasons to believe that he was fleeing someone or something that had seen him.”

He also attempted to have the jury sympathize with Gregory McMichael by claiming he was afraid of losing his only son during the incident.

Following opening statements from both sides, the jury was shown bodycam footage from a police officer from the day of the shooting. The footage was captured on Feb. 23 after Glynn County police officer William Duggan arrived at the scene. He is the first witness called in the trial.

The difficult-to-watch bodycam footage depicted Arbery’s body after he had been shot and even pictured the blood covering his wound. According to CNN Arbery’s mother, Wanda Cooper-Jones, could be seen crying while the video was played while at least one juror was seen covering their face— unable to watch the footage.

Prior to the trial beginning and the jury being sworn in, Judge Timothy Walmsley ruled that Arbery’s probation status will not be allowed to be heard by the jury. The decision follows a motion filed by attorneys representing Gregory and Travis McMichael to introduce evidence related to Arbery’s probation status. While defense attorneys argued the status was relevant to the murder, the state countered by arguing that Arbery’s “status as a probationer is not relevant, as the defendants did not know Mr. Arbery was on probation. Further, it is not relevant to the defenses of ‘citizen’s arrest’ or self-defense.”

Another important ruling the judge made was that photos of Travis McMichael’s pickup truck—the same truck he driving on the day of the killing—can be shown during trial as evidence. The truck has a license plate depicting the old Georgia flag featuring a Confederate emblem on it. According to defense lawyers, jury members considered the flag as a “symbol of racism” and the court was trying not to discuss race. However, the judge ruled otherwise, siding with state prosecutors who noted that Travis McMichael consciously put the plate on his truck.

“It is not character evidence, it is motive evidence,” lead prosecutor Linda Dunikoski argued to the court on Thursday. “This is something he put on the front of his truck. He wanted the world to know this, he put it out there to see,” she added.

Dunikoski presented the state’s opening arguments with a statement that began by asking, “Why are we here?” Her opening consisted of three parts: discussing the charges, speaking of the evidence, and then explaining what happened and what led to the murder.

“We are here because of assumptions and driveway decisions,” Dunikoski said. “A very wise person once said, don’t assume the worst of another person’s intentions until you actually know what’s going on with them … but in this case, all three of these defendants did everything they did based on assumptions—not on facts, not on evidence.”

To end the state’s opening argument, Dunikoski played a video from the day of the murder. The short video sparked national outrage after it was released in May 2020, three months after the February day when Arbery was shot and killed while out for a jog. The footage of the incident comes from Bryan’s cellphone. Bryan released it thinking it would help prove his lack of involvement in the incident and bolster the McMichaels’ claims of “self-defense.”

In it, Arbery is seen jogging down the street when a pickup truck stops in the road and a man, identified as Gregory McMichael, is seen standing near the driver’s side door with a shotgun.

According to reporters who were present, when the video was played during the opening arguments, Arbery’s father, Marcus Arbery Sr., left the courtroom, saying “I don’t want to see this.“

Watch the first day of the trial live below: