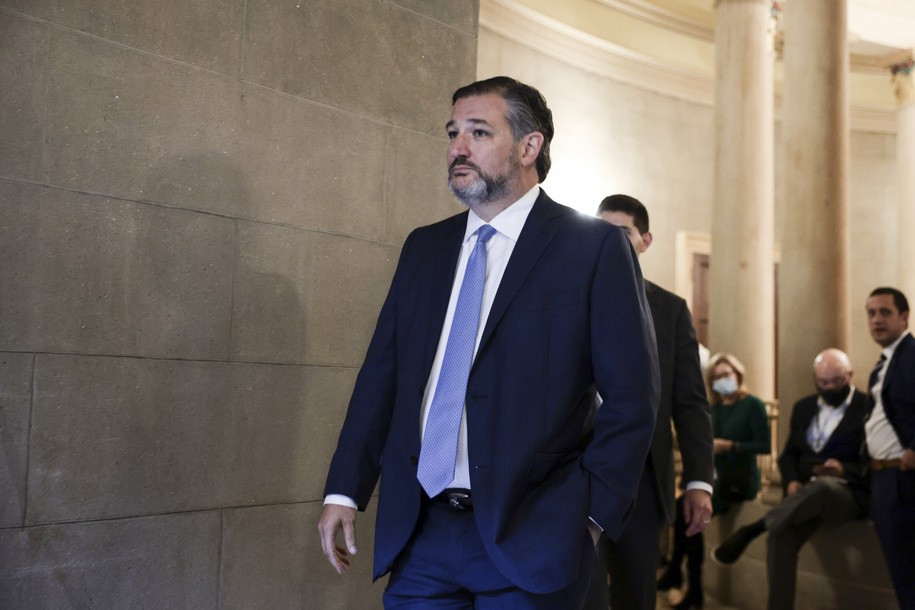 Sen. Ted Cruz is going after Big Bird. Yeah, that’s a sentence that’s perfectly at home here in 2021. We’re just going to have to pause and bask in this one for a moment:

There is no better illustration of how Republicans have politicized basic public health than Ted Cruz getting mad because Big Bird tweeted about being vaccinated pic.twitter.com/UpDhUiyMkg

What happened here is self-explanatory. Big Bird, as in the man-plus sized feathered Sesame Street character that helps teach children about kindness and sharing and how to cross the street without getting your innards tattooed with the over-chromed grill patterns of modern sport utility vehicles, tweeted about getting vaccinated. Because Ted Cruz, an actual sitting senator thanks to low standards and Texas, had not a damn thing better to do, he took offense to this, and we were off to the races.

Lest you think that this was just Ted Cruz having a momentary mind burp after his sixth can of vodka-spiked evening soup, yelling at Big Bird quickly became an actual thing. Weird-ass Fox News hosts were by the next morning attacking Big Bird, Sanjay Gupta, and Sesame Street for the “creepy” “propaganda” that is “targeting” children. The segment included several Enormous Damn Lies about children and COVID-19 that we will not repeat here, but which are considered holy gospel to anyone sitting on the greasy Fox News morning couch.

But let’s get back to Ted Cruz, because Ted Cruz is the devil’s personal coatrack. To believe that a Muppet telling children about COVID-19 vaccination in a non-frightening way is “propaganda,” you have to believe that vaccine advocacy is “propaganda” in general. There isn’t much nuance for Ted to have picked out of this, but he swooped in from his Senate-high perch to declare a pro-vaccine tweet from a Muppet “government propaganda.”

Ruper is right on this one: The only way you get from point A to point B is if you’re politicizing basic public health as matter of reflex. And Cruz and other Republicans aren’t even bothering to pretend they’re not doing that. Getting vaccinated, according to Republicans from Ted Cruz to Ron DeSantis, is a political decision. Not getting vaccinated is not a matter of endangering public health, but of expressing your contempt for not-Republican health experts and political figures. “Dying to own the libs” is now a belief that’s filling hospitals to capacity even  as near-universal vaccine availability should have brought the pandemic close to its end.

Big Bird is trying to familiarize the topic of vaccination, as new FDA approval allows children as young as 5 to get vaccinated against the disease that is omnipresent in their communities and that has upended their schooling, their playtime, and countless other aspects of their lives. Big Bird, and Sesame Street, are trying to talk to children about pandemic experiences in ways that will not terrify them.

But this is something new to Republicanism, not to Sesame Street. Sesame Street has addressed childhood fears like vaccination for a half-century. Ted Cruz may have watched this segment the day it was first broadcast, though his toddler brain may not have absorbed much of it:

Nor is the notion of turning to well-known characters of popular culture to promote public immunization drives confined to the socialist hellscape of children’s television:

Man, wait until antivax politicians find out about how R2-D2 and C-3PO tried to encourage vaccination… in 1978. Almost like this isn’t a new thing and programs that cater to kids want to keep them safe and healthy. pic.twitter.com/Q5nfH5TVsj

What is new here isn’t Big Bird. It’s Ted Cruz. Past Republican generations did not consider vaccinations against polio, against measles, against rubella, and other diseases that once filled American cemeteries with child-sized graves to be a conspiracy against their freedoms; it was a given that American children should be protected against any death we could so trivially protect them from. There were cranks, to be sure, but the notion of an American political party reflexively opposing vaccinations as major plank in their political agenda—purely, that is, because their political rivals were boosting it—would have previously been considered bizarre.

With the advent of new Republicanism, sporting such intellectual leading lights as Ted Cruz, Ron DeSantis, Greg Abbott, and whoever else can shout themselves hoarse in front of an unmasked pandemic crowd, doing anything to tamp down on pandemic deaths is now considered suspect. It was considered suspect because, in the beginning, the most incompetent president to have ever been shoved into the Oval Office oversaw a complete breakdown in government readiness and pandemic response and, rather than admitting failure, claimed that he simply didn’t need to do anything because the pandemic would not come here, or would not be severe, or was not really resulting in deaths, or was only resulting in deaths in states Republicans didn’t like, or could be cured with a miracle cure one of his advisers saw on the internet, or with a different one, or that a deadly pandemic was something that we just needed to work through by getting on with our lives and The Economy and accepting that the most vulnerable among us were probably going to die but it’s not like they were important to The Economy to begin with.

Once a Dear Leader figure had declared that a worldwide and deadly pandemic was merely a politically motivated attack meant to dent his own greatness, Ted Cruz and the rest of Republicanism was duct-taped to that position and obliged to defend it. It was that or admit the emperor was nude, and for all but literally a handful of Republican leaders that choice turned out to be easy.

That said, conservatives have always had it out for Big Bird and Sesame Street, so it’s not too surprising that Cruz, who is nothing if not lazy, thought this would be an easy way to boost himself via longstanding Republican zeitgeist. Have you looked, really looked, at the sort of things children’s television programs have been teaching our children?

Sharing? What is sharing, but an introduction to communist thought?

Compassion? Republicans have firmly declared what should be done with your feelings, and compassion has no role in it.

Coping with intimidating situations? Republicanism already has that. It’s called “have an absolute fit.” Bonus points if it’s on an airplane and your fellow passengers have to band together to hogtie you while the pilot radios that your flight will be making an emergency landing.

Learning your letters? A gateway to book-reading, then book-learning, then academia.

Ernie and Bert are just The Odd Couple for children, and The Odd Couple was a play, and playwrights are notorious promotors of counterculture beliefs. Elmo is what happens when you let your child run wild in their own imagination rather than sitting their asses down in front of their Ted Cruz coloring books to learn what Americanism is. Sesame Street has taken on subjects like death, like hunger, like homelessness—and it is all slanted, slanted maliciously against Republican lawmakers who have fought like hell to make sure death, hunger, and homelessness are meted out to whatever Americans might deserve such fates.

Teach children that even though there’s a pandemic going on that’s the reason their whole world has turned upside down, there is hope in the form of a vaccine that can help keep them safe in exchange for a momentary hurt and a sore arm, and you may be running afoul of Republican politicians who have instead insisted that the pandemic is a fiction invented by liberal elites.

Vaccination? Vaccination seems by far the most harmless of subjects, compared to any of that. And it would have been, if Ted Cruz had at any point in the last four years been able to grow a human spine. If he and the rest of his party were able to reject the notion that “a crapload of nothing” was a legitimate government response to a new planet-wide pandemic, even if Dear Incompetent Leader was insisting upon it, then the rapidly produced actual miracle cure would not today be the politically tuned and plotted culture war that it has become.

All it would have required was a moment of middling courage. At any point.

I had an absolutely insane dream last night that fully grown adults were spending a Saturday evening tweeting epithets at Big Bird.

My well-educated, not economically anxious neighbors yesterday informed me that vaccinated people who wear masks are MORE likely to contract Covid because they breathe in virus particles. https://t.co/OnNBfbZXFi

Republicanism is devoted to pushing falsehoods and fictions out to their base for the sake of stoking whatever fears can be stoked. It is a movement that now rejects election results, rejects medicine, and rejects anything else that comes from “elites” whose expertise contradicts the stories fascist liars would prefer to tell.

Big Bird may be taking on Republicanism’s most well-known leaders, but it’s not a fair fight. The bird has them outclassed by a wide margin.