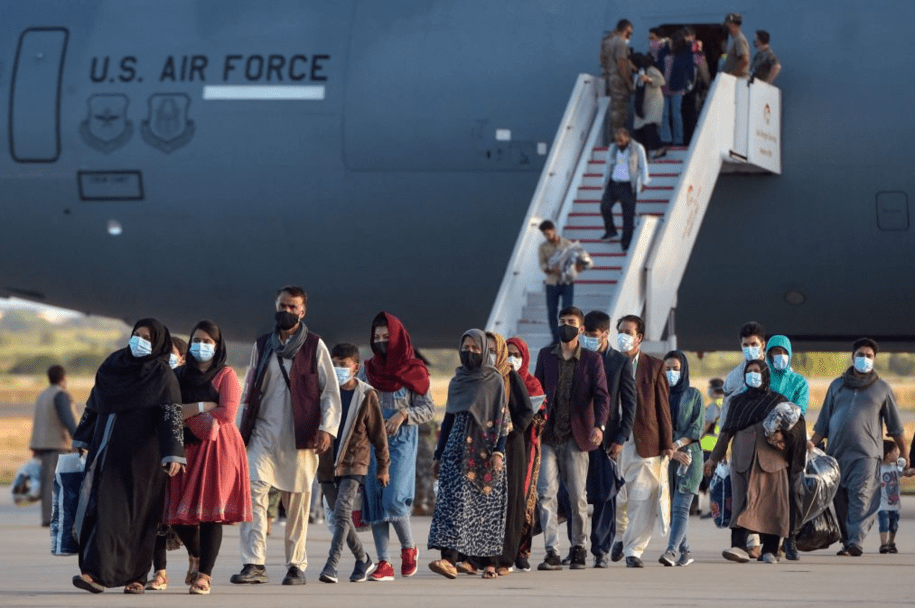 In late October, the U.S. State Department announced a new sponsorship program for incoming refugees from Afghanistan. Modeled after a similar community sponsorship program in Canada, the Sponsor Circle for Afghans allows groups of U.S. citizens to sponsor a family of refugees. The program is meant to involve American community members in the resettlement process for refugees while, at the same time, providing relief to the U.S. resettlement infrastructure, which has been stretched thin in response to the crisis in Afghanistan.

Tens of thousands of Afghans fled their home country and have relocated abroad after Kabul, the Afghanistan capital, was captured under the Taliban regime following the withdrawal of U.S. troops in August. According to the Biden administration, roughly 7,000 Afghans have since been flown out and resettled in communities across the U.S.. The government’s shrunken resettlement system—which was reduced under former President Donald Trump—has not been able to withstand the sudden influx of incoming Afghan refugees.

But Hamidullah Noori, an Afghan chef who came to the U.S. as a refugee in 2015, says the resettlement system in the U.S. has been overburdened for years, even before the crisis in Afghanistan. Refugees are the ones who ultimately bear the brunt of the overwhelmed system.

“We really need more support because nonprofit organizations, they are slammed,” said Noori, who now owns an Afghan restaurant called Mantu in Richmond, Virginia. “They always say they have some management issues, their top management are not hiring more people and … most of them are working like 16 to 20 hours [a day],” he added.

The U.S. refugee resettlement infrastructure involves a network of government agencies and national nonprofits. As the number of refugees admitted to the U.S. declined drastically—falling from an admissions cap of 110,000 during President Barack Obama’s final year in office to 45,000 under Trump, with just 20,000 refugees ultimately resettled in 2018—resettlement organizations cut their operation size, leaving a dwindled network. Biden committed to processing 62,500 refugees in his first year but resettled just 11,411 refugees by the end of fiscal year 2021, which his administration attributed to the decimated resettlement infrastructure under the previous government. Now, following the Afghanistan crisis, tens of thousands more Afghan refugees are undergoing vetting at U.S. military bases and other sites abroad before they will be brought to the U.S.

Noori experienced a lack of support when he resettled with his family in the small Virginian town of Newport News after being approved for the Special Immigrant Visa (SIV), a visa program specifically for Afghans who worked with U.S. entities in Afghanistan. Afghans who go through the SIV program do not require sponsors and instead are provided with a case manager from nonprofit partners assisting with families’ resettlement. But Noori recalled the feeling of helplessness that he experienced when he could not reach his case manager for a week while unable to access food and groceries for his family. He said the nonprofit he worked with could not find him a kitchen job that matched his skills, instead offering him a job in construction. Determined to stay in his profession, Noori rented a bike for $25 and knocked on restaurant doors around town. He eventually found a job at a Mediterranean restaurant.

Now a restaurateur himself, Noori provides free meals for his community’s unhoused residents and refugees. He emphasized the need for nonprofits and sponsors to prioritize the needs and wants of the refugees who are coming here, instead of deciding for them.

“The Afghans, they should decide what they need, not the organization,” he said.

With the new community model of sponsorship, the government hopes to ensure that incoming refugees receive consistent support as they rebuild their new lives in the U.S. Under the Sponsor Circle program, groups of five private individuals join together to form a sponsor group, which then must go through a certification process where each member is vetted and trained by the Community Sponsorship Hub (CSH), a project under government partner Rockefeller Philanthropy Advisors, Inc. After they are certified, sponsor groups can submit their sponsorship application. (As of this writing, the background check portion for the certification process had not been fully set up online, which means potential sponsors cannot complete their applications yet.)

“This program showcases the powerful role that individuals can play in coming together to welcome and integrate Afghans into American society, reflecting our spirit of goodwill and generosity,” read the U.S. State Department’s statement. The community-based model empowers a group of private individuals to act as surrogates for nonprofit partners that have become overwhelmed by the quick swell of Afghan refugees in the last month.

For three months, the Sponsor Circles will help their sponsoree with things like securing housing and employment, providing living funds, and helping them in their application for government benefits, among other responsibilities. As such, Sponsor Circles must secure at least $2,275 per individual refugee to cover costs.

While sponsor groups receive resettlement assistance training from partner nonprofits, some may face real-life challenges in helping refugees during the early relocation phase. For example, resettlement nonprofits in California—the state that holds the largest concentration of Afghan immigrants in the U.S.—have encountered issues in securing affordable housing for recent Afghan refugees due to the state’s skyrocketing housing prices. As a result, according to a report by LAist, refugees are only relocated to the state if they have family or relations who can provide housing.

But the needs of refugees also go beyond technical assistance.

“I think that one of the things that will really make an incredible sponsor is anyone that explains the culture,” said Walid Azami, a photographer and creative director based in Los Angeles. Azami came to the U.S. as a refugee with his parents and siblings during Afghanistan’s conflict with the then-USSR in the 1980s. A big challenge during his family’s resettlement process was dealing with culture shock.

He recalled one example where his family had been confused after receiving a notice from the school informing them about ice cream sundae giveaways on Friday, which they had mistaken for a day off—Sunday. His mother had to walk his siblings to school to get an explanation of what it was about.

“I remember that, thinking, ‘Well, that was so easy to solve,’ and I was in second grade. But what a wrench that throws into a family’s operation just figuring out things,” which for a traditional American family would not be a big deal, he said. “Yes, we’ll learn the [English language] words. Yes, there’s a lot of apps and smartphones and the internet and everything. But learning the culture is really difficult, especially for parents that have multiple kids, and they might be working double jobs. They don’t have time to learn that.”

Regardless of the potential challenges, becoming a sponsor for Afghan families is a unique opportunity to help people directly, providing them with community and a fresh start to their lives, after they’ve lost nearly everything. Khalid Ahmadzai, the director for economic advancement at Canopy Northwest Arkansas, an organization that provides long-term resettlement assistance for refugees, emphasized the importance of community involvement—particularly from other community members of color—in welcoming refugees to the U.S.

Ahmadzai hopes that news of the need for more support for resettlement assistance for refugees will inspire community members to “check out their refugee resettlement agencies and say, ‘Hey I want to volunteer, I want to be a mentor.’ Just play a part.”

Prism is a BIPOC-led nonprofit news outlet that centers the people, places, and issues currently underreported by national media. We’re committed to producing the kind of journalism that treats Black, Indigenous, and people of color, women, the LGBTQ+ community, and other invisibilized groups as the experts on our own lived experiences, our resilience, and our fights for justice. Sign up for our email list to get our stories in your inbox, and follow us on Twitter, Facebook, and Instagram.