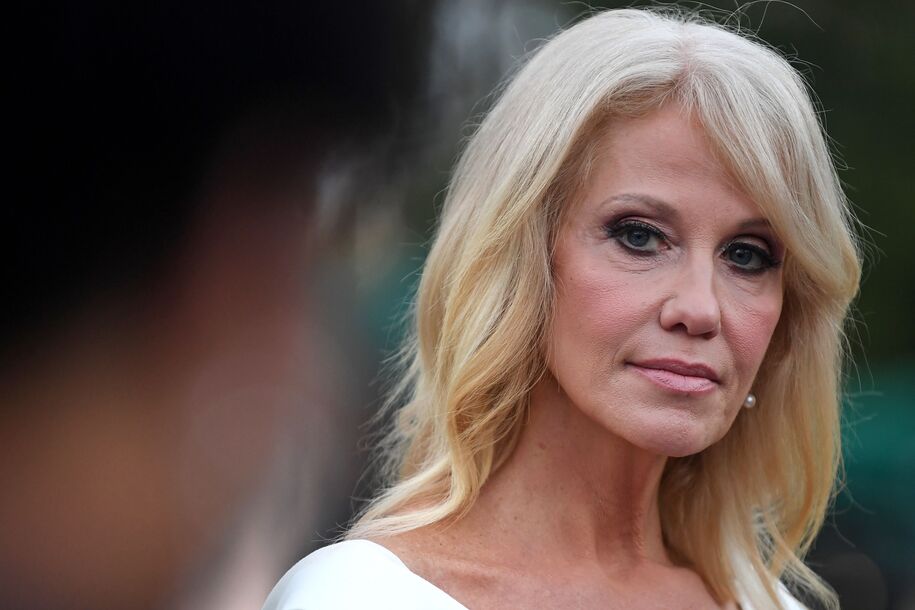 Trump ex-spokescreature Kellyanne Conway is a lying propagandist. That is her only purpose. She may have had, at some earlier point in her life, another, but for the last half-decade her purpose has been to brazenly lie to the public in service to a fascist movement bent on propping up a delusional and incompetent narcissist as the nation’s long-awaited golf-cheating tax-dodging god-king. Fox News is a fascist network, a network now so devoted to promoting falsehoods that their pandemic viewers are dying off at elevated rates.

Just because the propagandists are literally getting people killed doesn’t mean their efforts aren’t ridiculous. Fox News hosted Conway to gaslight their equally ridiculous viewers into believing that one of the most memorable parts of the early pandemic didn’t happen. You know, the thing we all lived. The thing every last person old enough to have grasped object permanence lived through, because it was a freakin’ year and a half ago. Welcome to the magical world of rewriting history, explained to you by a floating head reporting from what appears to be some sort of alcohol-serving news casino:

“I worked in that White House for four years. We never even heard of a such of a thing. There was no supply chain crisis” pic.twitter.com/UPmLRFoivJ

There is, we’re all going to admit, at least some possibility that First Lieutenant Bullshit here “never even heard” of a supply chain crisis during her White House tenure. There is a staggering amount of things the Trump White House appeared to neither know about nor give a rat’s ass about, from ethics laws to why attempting to cure COVID patients with ingested disinfectants might be a bad idea. Conway’s White House most definitely heard about a supply chain crisis during the first year of the pandemic, however, because Conway was one of the malevolent, lying hacks whose White House job was to tell reporters asking about it that it was all perfectly under control.

Just because Conway is still around and still one of the most dishonest people in all of America, however, doesn’t mean we have to treat her with any respect. The great and glorious internets were very quick to latch on to the Conway-Fox attempt at mass delusion, and Conway’s garbage doesn’t deserve any response other than internet mockery so away-we-freakin’-go:

She literally reported on it being an issue. Watching Kellyanne Conway Comments to Reporters at the White House @CSPAN https://t.co/PPYdFGLWbO

“Americans were bidding against each other and driving prices up…businesses eager to help were looking to the federal government for leadership and direction. “Free markets will solve this,” Kushner said dismissively. “That is not the role of government”https://t.co/iLe8RW2RLY

Respirators, swabs, COVID tests, nurses wearing garbage bags due to lack of PPE – all thru 2020. And to this day we don’t know what Kushner did with a lot of these badly needed supplies that disappeared in transit to hospitals. https://t.co/ulNsfYoyl3

She’s not a liar. She’s a propagandist. Her lies are not for her own personal sake, but to convince Americans that their own recent history did not happen in an attempt to justify the political ideology that produced it. Conservatism demanded that pandemic preparedness be slashed, that international pandemic cooperation be curtailed, all in service to cutting government and lowering the taxes of the topmost class. It was a calculated risk, an assumption that a pandemic would not happen or, if it did, none of those affected by it would put two and two together and wonder why the nation was caught flatfooted when it did.

Most of the internet’s replies to Conway consist of pictures and reminiscing about the days when store shelves were empty, not just of cleaning supplies but of meat, and fruit, and God help you if you needed the Postal Service to deliver a critical replacement part because it would get to you sometime between four weeks from now and never. Gas prices were high, even though there was nowhere to go. Hospitals could not get enough of anything—and the Trump White House seemed quicker to focus on purchasing anti-malaria miracle cures, to the tune of a bajillionty doses, than the things actually needed.

Conway is a propagandist still devoted to a fascist and incompetent movement. If history needs to be rewritten to convince Fox News viewers that the movement produced only victories and their hated opponents are the cause of all ills, Conway will come out of semi-retirement to lie again.

The COVID-19 pandemic is, after all, spreading most vigorously in Republican-led regions with Republican-devoted Fox News viewers. The people she is lying to are the ones who most need reassurance that the pandemic surrounding them is Actually somebody else’s fault.