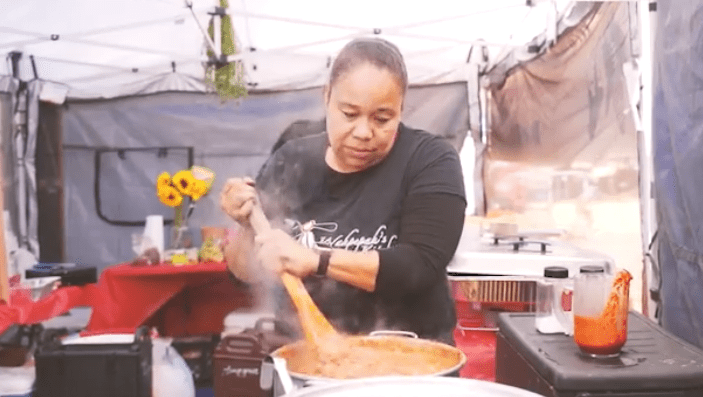 This month (Nov. 13 to be exact) Chef Crystal Wahpepah will finally see her dream come to fruition when Wahpepah’s Kitchen has its grand opening in East Oakland, California. Born and raised in Oakland, but a registered member of the Kickapoo Tribe in Oklahoma, Wahpepah says as a little girl she wondered why among all the different restaurants in the city, none offered her food—Indigenous food.

“I knew at a young age what was wrong,” she tells Nosh. “They took away our food.”

Since the time she was a little girl, Wahpepah has been in the kitchen. Spending summers in Oklahoma with her grandmother or sharing meals with the multi-tribal urban Native community at Oakland’s Intertribal Friendship House—a place established in 1955 to serve the needs of those who’d been relocated from reservations to the San Francisco Bay area.

“I’ve seen so many different beautiful tribes and different foods,” Wahpepah says to KQED. “So all these foods that I cook, it’s something that I grew up with and something that means a lot to me.”

After studying at Le Cordon Bleu in San Francisco and honing her skills at La Cocina, a professional development program for marginalized individuals, Wahpepah, who identifies as Indigenous Black American, threw herself into finding her niche, cooking the food she grew up on, and sharing it with others. She did her research on the dishes from different Nations, joined Food Sovereignty Alliance, and attended food summits where Native chefs and farmers came together.

Since the time she began catering, before her brick-and-mortar restaurant, Wahpepah has had a booming business feeding companies in Silicon Valley—Facebook, Twitter, WeWork, Google, and others. But, she’s held fast to her three tenets:

“At the end of the day, that’s what I want: to make people fully aware, to realize whose land they’re on,” she tells NPR.

She exclusively uses ingredients from Indigenous farmers across the country to make her staple blue corn waffles, blueberry bison meatballs, and a wide array of Native stews, salads, and nut bars.

“Crystal has always been as much about this place, the Bay Area, as she is Native and Indigenous foods,” Caleb Zigas, the departing executive director of the La Cocina kitchen incubator tells KQED, remember Wahpepah’s time in the program ten years ago.  “That kind of relationship to place is so special to me, and I think you can really taste it in her food.”

“I believe our ancestors are actually asking us to make these foods. So once you feed your community with it, you can taste the healthiness; you can taste the benefits of it, especially mental, physical, and emotional. [People] want to enjoy all these different foods, especially how we grew up with traditional foods. But some don’t really know what to do with them or how to make them. In this time and age, I think we’re very fortunate to have so many people keeping the tradition alive. That’s where I source my foods from—other Indigenous people that are making these.”

Despite the dearth of Indigenous chefs on the scene today, she’s determined to inspire Native chefs to bring their food to follow their passions.

“I feel that Native American communities, Native American people are so forgotten … and so that’s my job is to actually make everyone aware how good our foods are. Everybody has their job. My job is to cook beautiful native ingredients on the plate,” she tells NPR.