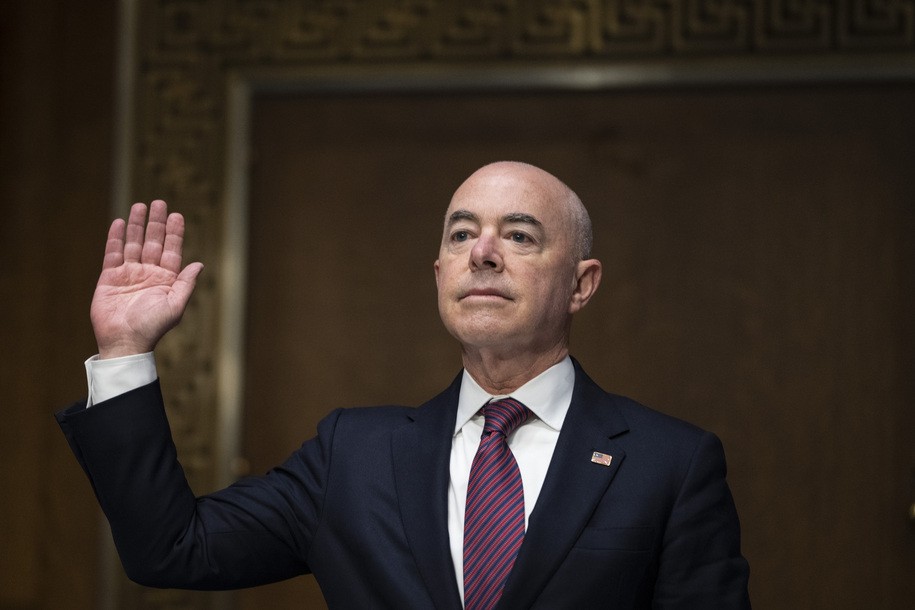 Sen. Alex Padilla during a Senate hearing Tuesday addressed some of the most pressing issues raised by immigrant and human rights advocates in recent weeks, including the possible court-ordered return of the previous administration’s inhumane Remain in Mexico policy, and unchecked abuses within federal immigration agencies. The hearing, titled Oversight of the Department of Homeland Security, featured Secretary Alejandro Mayorkas.

“I wanted to start with a couple of acknowledgments beginning with—I was glad to see that you issued a new memo to terminate the Migration Protection Protocols, also known as MPP, in late October about a month ago,” Padilla said. The new memo, authored by Mayorkas, noted the policy “had endemic flaws” and “imposed unjustifiable human costs.” Padilla said that while he understood “MPP cannot be terminated until the Texas court injunction is vacated, I’ve heard from many stakeholders along the border that there’s no way to humanize MPP.”

Dozens of legal service providers have previously informed the Biden administration that they won’t take any part in a Remain in Mexico reimplementation, writing in a letter late last month that they “refuse to be complicit in a program that facilitates the rape, torture, death, and family separations of people seeking protection by committing to provide legal services.” A number of border-based asylum organizations and advocates also left a virtual meeting with the administration just days before in protest.

The U.S. cannot restart the policy without Mexico’s consent. Border Report said earlier this week that the Biden administration has indicated in court documents that while Remain in Mexico may return in just weeks, “Mexico apparently has one major sticking point, although the brief does not detail what it is.”

“This policy, as we know, has caused a great deal of hardship to individuals who must wait in Mexico for their asylum cases, asylum cases to be processed,” Padilla said. “In your memo, you mentioned that a more comprehensive approach is needed to address the root causes of migration. And that MPP is not an effective deterrence policy. I think the data, statistics, that you began to share with this committee is evidence of that.” Padilla said he implored the administration to “once again to rescind MPP as soon as possible.”

Padilla then addressed disturbing news around a Border Patrol “shadow police unit” that a network of organizations along the southern borderlands said in a letter to legislators last month has worked for years to cover up abuses at the hands of agents.

“According to the letter, these teams have been operating for decades and investigating their own agents without authority and maybe obstructing justice by shielding agents from accountability,” Padilla said. “One case in particular, that is especially concerning to me, involves Anastacio Hernando Rojas—who was a longtime resident of San Diego and a father of five. In 2010 Anastacio was hogtied, brutally beaten, and repeatedly tased by border agents until he stopped breathing.”

”The police record reveals that after the incident, border patrol agents destroyed, altered, and withheld evidence from the San Diego Police Department. This incident did not happen in a vacuum. Border Patrol abuses were displayed all over national media more recently with the concerning treatment of Haitian migrants in Del Rio, Texas,” he continued. “Secretary Mayorkas, what measures has the Department of Homeland Security taken towards addressing serious abuses of power surrounding these critical incident teams?”

Mayorkas’ response was unsatisfactory, noting “the misconduct of one, does not define the heroism and integrity of the great majority of the men and women.” It’s unclear where that number came from. When it comes to Hernando Rojas’ killing alone, the Los Angeles Times reported earlier this year that as many as 17 agents had been involved in his death. “Mayorkas avoided any specific answer about the critical incident teams and instead just said on Friday the agency will have a briefing on discipline and transparency,” American Immigration Council Policy Counsel Aaron Reichlin-Melnick noted on Twitter.

And while Mayorkas promised a swift investigation into the Del Rio abuses, the department’s inspector general this week declined to investigate, instead referring the matter back to Customs and Border Protection’s Office of Professional Responsibility. Considering how the Border Patrol union and the agency itself have worked to protect abusive agents, there’s a real worry of no accountability.

“Sen. Mike Lee is now attacking Mayorkas for not defending the border patrol agents who were photographed corralling and abusing Haitian migrants at Del Rio, calling it ‘morale crushing,’” tweeted National Immigrant Justice Center Policy Director Heidi Altman. “I don’t know how to comment on this. The photographs showed evidently horrifying conduct.” Meanwhile, Josh Hawley spent questioning “implying that Afghan refugees are a major security threat to the United States,” Reichlin-Melnick said. He wrote that Sen. Ted Cruz asked Mayorkas “why he shouldn’t be thrown into jail for defying a court order on the Remain in Mexico program.”

Wait until he hears how the previous administration defied the Supreme Court on the Deferred Action for Childhood Arrivals program for over 100 days.

The issue of the previous administration’s family separation practice was also raised during the hearing, not by Padilla, but by Republicans. They were not angry about the separations themselves, of course, but rather by reports that the Justice Department has been in settlement negotiations with affected families that filed legal action against the federal government.

President Joe Biden has said that affected families “deserve” relief. Republicans say they deserve nothing for their suffering. Reichlin-Melnick said Marsha Blackburn joined Chuck Grassley “in declaring outrage over the possibility of settlements with separated families for stealing their children, asking Mayorkas how much $1 billion could be used for border wall payments and for hiring Border Patrol agents.” Altman said Richard Blumenthal noted experts called family separation “government-sanctioned child abuse,” and thanked him “for providing moral clarity and a clear memory of the horrors witnessed on the border during zero tolerance.”

“It stands in stark contrast with the collective and shameful rhetoric we’ve been hearing today,” Altman continued.