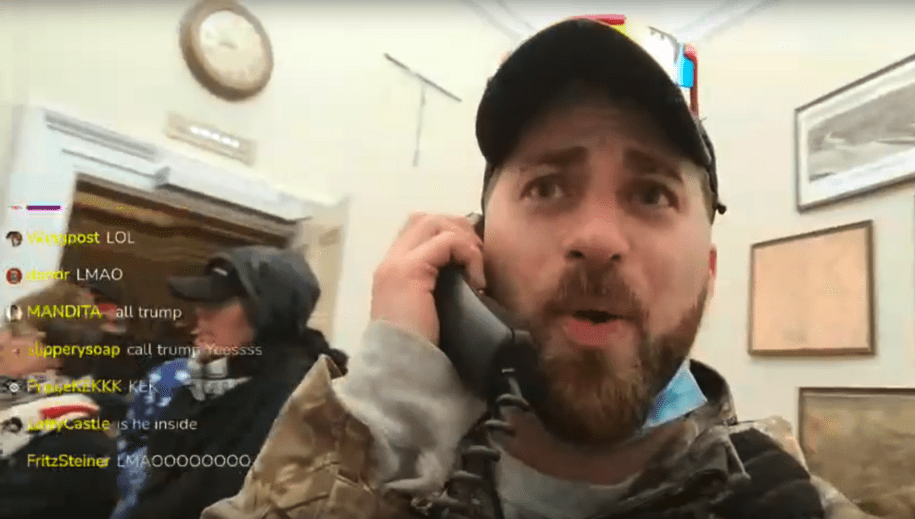 U.S. Capitol insurrection suspect, white supremacist online presence, and all-around douchebag Anthime Gionet, also known as “Baked Alaska,” is facing new charges added by authorities in Arizona. The two misdemeanor charges for criminal damage and attempted criminal damage stem from a video shot by Baked Alaska himself, which shows him defacing a Hanukkah exhibit. The video was from the middle of December 2020, and little “Timmy” Gionet’s crime—the one he captured and broadcast himself—complicates his legal woes even further.

You see, Baked Alaska broadcasted himself from Speaker Nancy Pelosi’s office during the Capitol building riots on Jan. 6. On top of the fact he was not supposed to be there because of the breaking and the entering and the trespassing and the treason, Gionet was not supposed to have been outside of the state of Arizona at the time of the insurgency. Mr. Baked Alaska had been arrested for macing a bouncer In Scottsdale, Arizona, back in early December 2020. Gionet had been released in that case with the agreement that he would not leave the state pending a hearing.

In early November, Nick Martin at The Informant tweeted out that Mr. Alaska had sent out an all-caps freakout saying that he was going to be charged for defacing the menorah, and that he was “a political prisoner” and was asking for help. Gionet also all-capped that he was being charged with a ‘hate crime.” Even though Gionet is a hateful anti-emitic piece of shit who lies most of the time, he was sadly lying about that.

On Friday, the Daily Beast reported that Maricopa County prosecutors charged Anthime Gionet on Nov. 3. The video, which was reviewed and shared by The Phoenix Times, showed Gionet walking down a sunny Arizona street and then pulling down a “Happy Chanukah” sign on a public menorah display. This was followed with the very manly Gionet telling his audience, “No more Happy Hanukkah, only Merry Christmas.”

Gionet was found guilty of the charges in the Scottsdale case just days before being charged with defacing the Hanukkah display. How this will complicate his situation is unknown. Hopefully it really complicates it for him. Baked Alaska has made a career of hanging out with avowed white supremacists, even appearing with the torch brigade down in Charlottesville in 2017.

After that, Gionet made headlines after harassing some women outside of a club, and then whining about getting his iPhone smashed. Gionet got annoyed with the group of women after they threw his pathetic attempts at flirting back at him by asking him questions about being a lame shite supremacist.

Here’s a reminder of the kind of dirtbag Baked Alaska is:

Unite The Right headliner & white supremacist grifter “Baked Alaska” harasses people who are trying to do their job and refuses to wear a mask while in a private business. Gets arrested for trespassing. Thanks to @YouTubeCreators @YouTube @twitter for platforming this dope. pic.twitter.com/AIsexuE7zq