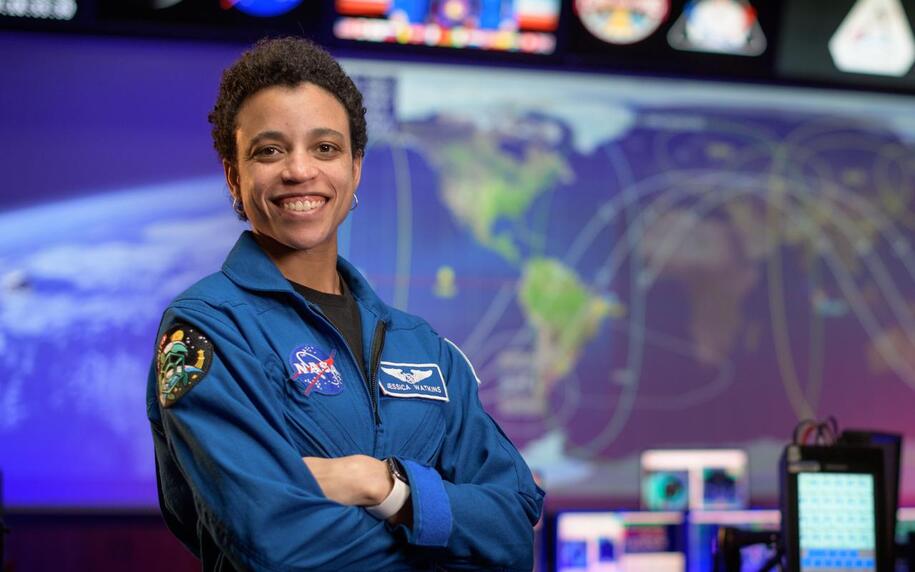 Starting in April 2022, Jessica Watkins will make history in her new home on the International Space Station (ISS). Watkins will be the first Black woman to live and work on ISS.

When Watkins joins the SpaceX Crew-4, the fourth rotation of astronauts on the Crew Dragon spacecraft, it will be her first mission into space since starting her stint with NASA in 2017. She has worked in the agency’s research centers and on the Mars rover, Curiosity.

Watkins will fly to the space station from NASA’s Kennedy Space Center in Cape Canaveral, Florida, alongside NASA astronauts Kjell Lindgren and Robert Hines and astronaut Samantha Cristoforetti of the European Space Agency. The mission is expected to last six months.

The Maryland-born Watkins tells NPR that since childhood she’s looked to astronauts such as Mae Jemison, the first Black woman in space, and Sally Ride, the first American woman in space. She hopes to inspire more children of color to consider space travel.

“I do hope that all young girls, especially young girls of color that are interested in STEM and interested in exploring space, feel empowered to do so,” Watkins told Colorado Public Radio last year. “I just hope young girls across the country feel that way now.”

Watkins holds a bachelor’s degree in geological and environmental sciences from Stanford University and a doctorate in geology from the University of California-Los Angeles. As such, she told CPR, she would absolutely consider traveling to the red planet at some point, “as long as we have a ride back,” she joked to CPR.

Only seven of the 249 people who have ever boarded the space station since its inception in 2000 were Black. Jeanette Epps, like Watkins, was a NASA astronaut initially set to be the first Black woman to live and work on the space station in 2018, but she was replaced. According to The New York Times, Epps remains scheduled for a six-month mission as part of the first operational astronaut crew to fly Boeing’s Starliner capsule to the station. But the development of that capsule is years behind schedule.

Last year, Watkins was selected to join a group of NASA astronauts to lead the agency’s multibillion-dollar Artemis program, which aims to return humans to the moon. The plan is to land the first woman and the first person of color on the moon by 2025.

”A dream feels like a big, faraway goal that is going to be difficult to achieve, and something that you might achieve much later in life,” Watkins said in a video released by NASA last December. “But in reality, what a dream is—or a dream realized is—is just putting one foot in front of the other on a daily basis. And if you put enough of those footprints together, eventually they become a path towards your dreams.”