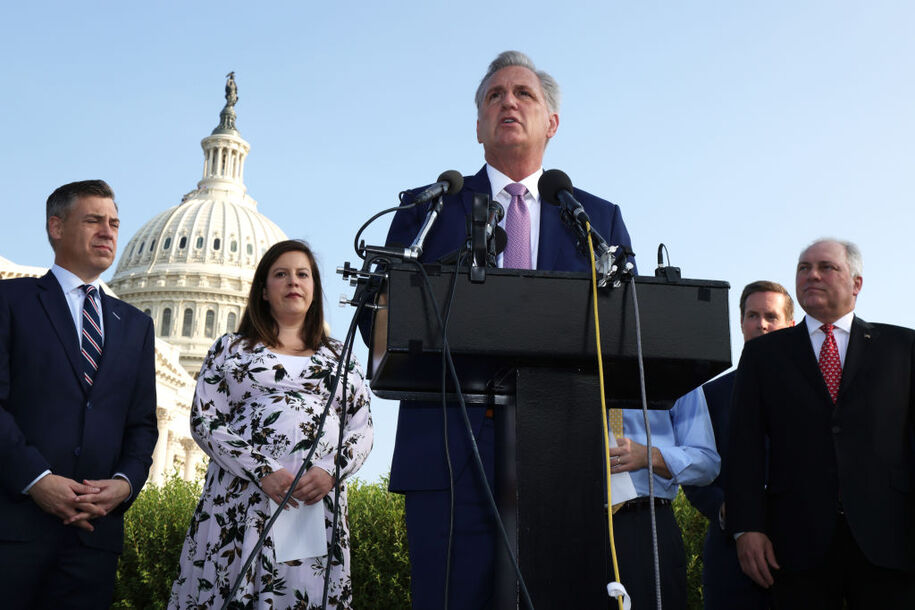 The Republican Party can add a new accomplishment to their expanding list: For the first time, the United States has been demoted to the status of “backsliding” democracy by a major global watchdog of such things. The International IDEA think tank made the change in its newest report, citing “declines in civil liberties” and other factors.

The United States now joins troubled inching-towards-autocracy nations like Hungary and Poland—which, notably, have recently been celebrated by Tucker Carlson and other far-right pundits as potential models of what this nation should become. We are still a democracy, but the things that make us a democracy are themselves under attack.

International IDEA is blunt in pinning the blame where it belongs, calling Donald Trump’s attacks on the legitimacy of the 2020 presidential election “a historic turning point.” The Guardian quotes International IDEA Secretary General Kevin Casas-Zamora as he notes that “the increasing tendency to contest credible election results, the efforts to suppress participation (in elections), and the runaway polarisation” are among the “most concerning developments,” and that Trump’s attempted nullification of the election with false claims of fraud was soon “has replicated, in different ways, in places as diverse as Myanmar, Peru and Israel.”

So congratulations, Republican Party leaders. Your backing of Donald Trump’s unforgivable hoaxes is not only recognized as a key event that threatens the very stability of this country, but of democracies around the globe. Take a bow, Ted Cruz. Raise a fist, Josh Hawley. Allow your unending parade of Republican lawmakers granted weekly status to again falsely “question” whether or not the last election was fraudulent to take a televised victory lap, Meet the Press.

There was a long stretch of time when it was unclear whether Donald Trump, a celebrated failure of a man who twitched through each day motivated solely by the narcissist’s delusions of grandeur, was stumbling into fascist declarations and fascist ideologies purely by accident—a product of believing himself the only Great Man in history and, therefore, his own fears and grudges to be the stuff of natural law. The answer has now become irrelevant. It was the Republican Party, from elected officials to pundits to petty functionaries, that heard each of those things and were so roused into action that they retooled their entire party to enforce loyalty to them.

Each of the guiding principles of fascism is now an intrinsic party belief and strategy. Trump may have burped them, but it was the Fox News talking heads and the virulently ambitious candidates of the party who wrote them out in complete sentences and scattered them to an angry, hungry base.

Republicanism now uses hoaxes, and crafts hoaxes, as a primary tool of governance. Hoaxes are used to justify crackdowns on voting and other civil rights, to discredit elections not won by Republican candidates, to invoke images of “burned cities” and other imaginary violence in places not governed by Republicans, and in blaming invisible enemies (“antifa”) for real violence caused by the party’s own backers.

Republicanism is obsessed with notions of victimhood and with community and racial decline, pushing “great replacement” hoaxes that claim national culture and national greatness is being intentionally damaged through plots to supplant white Americans with nonwhite immigrants or their allies. Notions of hyper-masculinity abound, with leader figures praised for toughness or portrayed in art as musclebound despite the reality of those figures. The precise enemies of the movement have been named, and they are fascism’s usual enemies: immigrants, who dilute the “culture.” Homosexuals and those who ally with homosexuals or write books that mention them. Educators, especially those who teach history that conflicts with the movement’s preferred rewrites. Journalists. The infirm, who should be willing to sacrifice their lives in a pandemic so that the fit and the employed can return to their previous lives.

Republicanism has embraced notions of redemptive, necessary violence. Those who took part in a violent insurrection are, we are told, now political prisoners facing punitive charges only for “protesting” an election they sought to nullify. Martyrs are named. A child who kills members of the out-group is unabashedly hailed as a hero, and elevated as a new movement celebrity. Those who torture prisoners or act against military orders have the charges against them erased, and are feted by rally crowds.

A significant percentage of the base is now willing to tell pollsters that violence may be necessary to “return” the nation to the party’s ideals; a significant percentage of party candidates are willing to nudge those beliefs along with “Second Amendment” nods to the “right” of their in-group to rise up against their neighbors or the government itself, if either attempts cultural change too far afield from the movement’s own beliefs.

As many, many experts have now noted, the successful rousing of top Republicans into supporting the nullification of an election rather than accept a loss of power was a pivotal movement. It was an act of sedition, and one that continues. It solidified the party’s shift into hoax-promotion as central policy pillar. It was violent, Trump watched it turn violent with approval, and all of Republicanism soon assembled itself to demand that it, too, be left unprobed.

Congratulations, Republican Party. Your corruption is now recognized across the world as a danger to U.S. democracy—and to world democracy. You followed Trump from petty grift to insurrection and, even now, push farther.