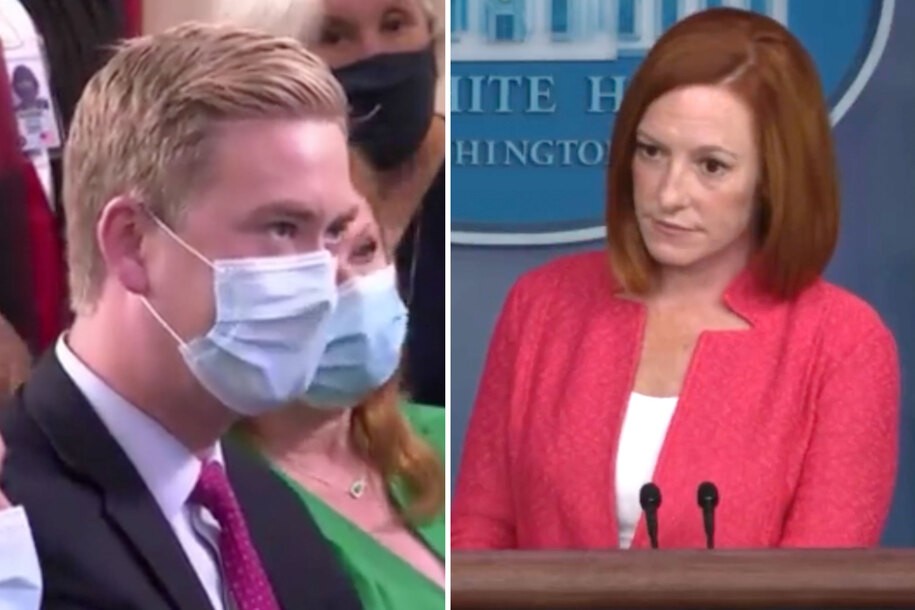 Being the less well-regarded son of Fox & Friends host Steve Doocy has to be tough. They say the apple doesn’t fall far from the tree, but in Peter’s case the testicles don’t descend far from the abdomen. Or at all, for that matter. Because the next adult question Doocy Jr. asks White House Press Secretary Jen Psaki will be the first.

These exchanges, wherein Doocy asks Psaki a “gotcha” question and Psaki effortlessly swats it out of the air, are legion—but Doocy’s latest flaccid tetherball impression is particularly gobsmacking.

See, like every other president in history—and basically everyone else in the country—President Biden is leaving his designated workplace during Thanksgiving week for some R&R. Because it’s a fucking holiday, dude! But that’s not good enough for Doocy. He needs a sound bite to bring back to Daddy, so Daddy can chew it up and regurgitate it into his chirpy, lying mouth.

DOOCY: “The president said today that he was sent here to look out for these working and middle-class families who are strained right now, so what should they read into him leaving now at this time of great personal financial hardship for so many to go to Nantucket for the week?”

Good God. Do these hacks remember Donald Trump spending more time on the golf course during his misrule than most professional greenskeepers? Do they recall that Trump basically gave up being president for two and a half months while he desperately tried to find a way to illegitimately keep the job he wasn’t doing?

I sure as shit do. But, sure, let’s crucify Biden for jonesin’ for pumpkin pie.

It’s likely that even Peter Doocy knows better than this, but he also knows that his viewers will believe anything his network reports about Democrats, so long as it’s incendiary and libelous.

And even if we’re to believe Trump kept his nose to the grindstone (or to the ground Adderall, perhaps) during his tenure, what exactly did he have to show for it other than a cratered economy and net negative job creation? In four years, Trump couldn’t get an infrastructure bill off the tarmac, despite having complete control of Congress for two of those years. Biden launched his own middle-class job-creating infrastructure plan in just 10 months—and he’s not done yet.

So that’s what Joe Biden will be doing in Nantucket this week, Peter: Taking a well-deserved rest.