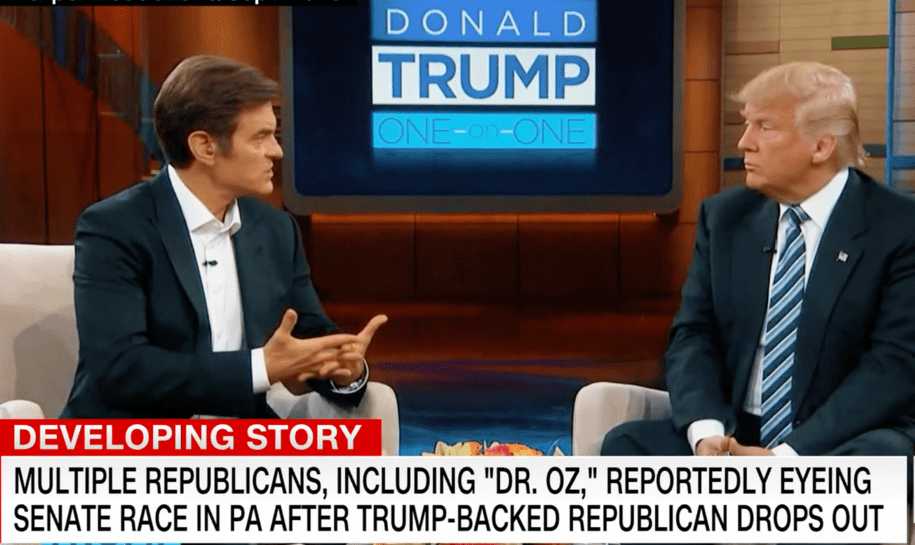 Because Donald Trump is a gooey, hulking, Brobdingnagian wad of loser, his handpicked replacement for the Senate seat being vacated by Sen. Pat Toomey has already settled in for his political dirt nap. Sean Parnell, the MAGA-anointed heir apparent to the seat, suspended his campaign on Monday after a judge awarded custody of his children to his estranged wife, following disturbing allegations of domestic abuse.

For some reason, Parnell didn’t pull a white man’s mulligan and simply bawl in front of the camera—which is really weird, considering the tactic has been proven effective in securing both Supreme Court confirmations and lifetime passes to kill protesters. Instead, Parnell just slinked away—as if shame was still a thing in today’s Republican Party.

Now that there’s a vacant seat in the GOP primary clown car, at least one more red-nosed harlequin is thinking of climbing in.

According to multiple Republican operatives in and outside of the Keystone State, the slate of GOP candidates could expand in coming weeks to include hedge fund executive David McCormick and daytime TV personality Dr. Mehmet Oz.

And then there’s this, from the Philadelphia Inquirer.

Philadelphia Inquirer reports Dr. Oz is hiring staff and is close to jumping into the GOP Senate primary in PA: https://t.co/YivP0teNPt pic.twitter.com/YlKKrrtjmp

Oh, great. Republicans get to choose between a hedge fund manager and a quack. Well, at this point in American history, quacks are doing far more damage to the country, so Oz clearly has the edge over McCormick in a GOP primary.

Pennsylvania Republicans are more perplexed that Oz, an Ohio-born doctor who attended medical school in Philadelphia and lives in New Jersey, is considering a run. Oz’s interest in this race was first reported in the Washington Free Beacon and Politico, but the host of the Dr. Oz Show said in a 2007 interview that he would “consider” running for office some day, calling himself a “moderate Republican.”

Look, with Donald Trump still at large, Republicans are lucky he hasn’t endorsed the Phillie Phanatic. Or the dude who FedExes his cheesesteaks to Mar-a-Lago every Monday, Wednesday, and Friday. You can rest assured that Trump will always endorse the least qualified, most Trumpy candidate in any field, so Oz is a good bet. He also has past Trump connections!

[I]n 2018, Trump appointed Oz to the Presidential Council on Sports, Fitness and Nutrition. (Another Trump appointee to the council, Herschel Walker, is running for the Republican Senate nomination in Georgia and has Trump’s endorsement.)

Really? Who else was on the council? The demon sperm doctor? A Jimmy the Greek hologram? Aaron Rodgers’ COVID toe?

Sadly, Dr. Oz isn’t even a good TV doctor. He reminds me of those 1940s physicians who showed up in ads to plug cigarettes. Oz was an early advocate of hydroxychloroquine as a COVID-19 cure, and this advocacy may very well have coaxed Trump’s peripatetic brain cell into the useless-COVID-19-therapies camp.

But I’m not the only one who thinks there’s less to Oz than meets the eye. He occupies a truly rarefied space, having been personally called out in an article on the website of the National Center for Biotechnology Information, a branch of the National Institutes of Health.

As Dr. Steven J. Dell, chief medical editor of Cataract & Refractive Surgery Today, wrote on the site, Oz, who has an Ivy League pedigree, almost certainly knows better when he promotes his “alternative” (read: ineffective) treatments, and yet he does it anyway.

In March 2012, on a show titled “Medium vs. Medicine,” Oz had as a guest a psychic who claimed she could communicate with the dead. In fact, Oz has devoted several shows to psychics and those who claim to speak to spirits. Describing his own reading from television psychic John Edwards, Oz stated, “Let me tell you, it changed my life!” and “I’ve learned in my career that there are times when science just hasn’t caught up with things, and I think this may be one of them.”

During another show, Oz interviewed Dr. Mosaraf Ali, the miracle healer to Sylvester Stallone, Prince Charles of England, and others, regarding his use of iridology. According to this widely debunked, bizarre belief, each part of the iris corresponds to a specific area of the body, and a person’s state of health can be diagnosed by examining particular regions of the iris. After expressing his amazement at Dr. Ali’s diagnostic abilities, Oz stated, “I want to applaud Doctor Mosaraf Ali because these are ancient traditions and they have been around for centuries so who am I to dismiss them?”

Who? Oz is a trained clinician and scientist, someone who can read a scientific article with a critical eye. He is someone who can filter out the noise of the placebo effect or discern the simple carnival tricks of a charlatan. The problem is that most people in his audience cannot.

Wait, so Dr. Oz is just a high-profile liar and con man who manipulates his audience by telling them what they want to hear? And Donald Trump has seen him on TV? Perhaps if Trump doesn’t endorse him, it will only be because he doesn’t want the competition. And, yes, most of us would argue that Oz’s long history of raging nonsense disqualifies him, but who are we kidding? Look around you. Nonsense, COVID-19 promotion, and feral ignorance are now key elements of any winning GOP campaign—and Oz checks every damn one of those boxes.