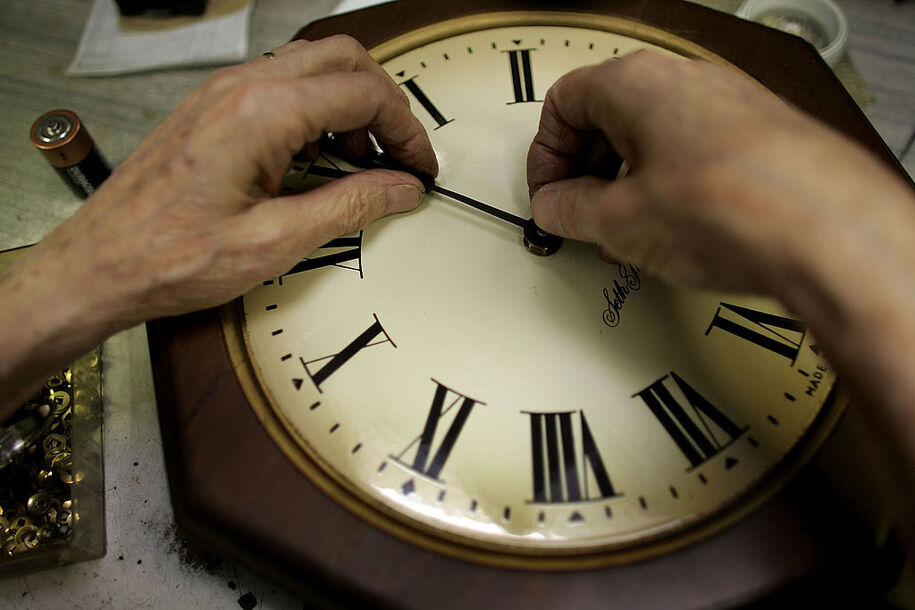 There’s a deep and abiding hatred of Daylight Savings Time that’s run through my family for generations. “War time.” That’s what my granddad called it, because that’s what they called it when it was first instituted back in 1918. (We have very spread apart generations on the McCarter side of my family—he was born in 1887.) They said it would save energy for the World War I effort.

Of course, where he and my grandma were ranching and farming at the time on the Flathead Reservation in Montana, that was bunk. It was all horse power as far as he was concerned, and dawn was dawn for the horses no matter what. Changing the clocks made absolutely no sense whatsoever, because what difference does it make where the hands are on a clock to a cow or to your crops?

He complained about war time every single spring, and would be pretty appalled to know that at this point we’re living in it almost year round. (As any sensible person should be.) That same loathing, obviously, has been passed down. Dad took up the mantle, of course, but he didn’t blame the war. He blamed the “goddamned Republican golfers” for keeping it going long after any national security justification was gone.

So you know when this article came out this month—“The political war around daylight saving time takes a nasty turn”—I was totally there for it. Imagine my surprise and satisfaction when I got to this part:

And then, there are the golf course owners. A survey by the National Golf Course Owners Association found its members overwhelmingly support the adoption of permanent daylight saving time, said Ronnie Miles, the group’s director of advocacy. Just one extra hour of daylight could mean up to 10 percent additional revenue, he told POLITICO.

You were right all along, Dad. (Don’t even get me started on the waste of precious water resources there.)

Not only was it gratifying to know that yes, you can blame it on golf course owners, but that the issue generates as much passion for others as it does my family (one-sided in our case; we are all “real” timers). Because the two people on opposite sides featured in this story, Jay Pea and Scott Yates, are pretty much obsessed to the point of loathing one another. Both lobby Congress for legislation to try to establish one time to rule them all, and both run advocacy groups to that end. Pea runs Save Standard Time, and Yates #LocktheClock.

Each suggests that the other is in the pocket of special interests. Yates has gone so far as to question whether Jay Pea is actually a real name (Pea showed POLITICO a California ID with his name on it) and accused Pea of operating several fake accounts on Twitter (Pea said he didn’t have time for fake accounts). Pea, meanwhile, believes Yates is a “wealthy powerful friend of Marco Rubio” (Yates said he did consult with Rubio’s office but has never had face time with a member of Congress on the issue). He accused Yates of calling him after dark to make threats, producing notes he wrote contemporaneously, in which Yates allegedly told him: “You’re never going to write about me, reply to my tweets, or anything … or I’m going to make you so f—ing sorry. You don’t even know. … You think this is libel? Then get a lawyer. But I will ruin you.”

I’m just saying, when you’re on the same side as Marco Rubio ….

Okay, not just Rubio. There are some Democrats misguided enough to think that they’re actually “saving” an hour by changing the numbers of the construct of “hours” humans have created to regulate their lives as if there was anything rational about it. Ed Markey is one of them, with his “Sunshine Protection Act.” As if the sun couldn’t shine if we didn’t change the goddamned clocks. As if he couldn’t get up an hour early all on his own if he’s so enamored of it. Why force it on the rest of humanity?

For me, I’m with them: “The American Academy of Sleep Medicine has called for the elimination of daylight saving time, on the grounds that standard time better aligns sunlight with the human circadian rhythm.” I like sleep. I like waking up with the light. I like real time. Like all the best fights, this one will probably be lost. Goddamned golfers.