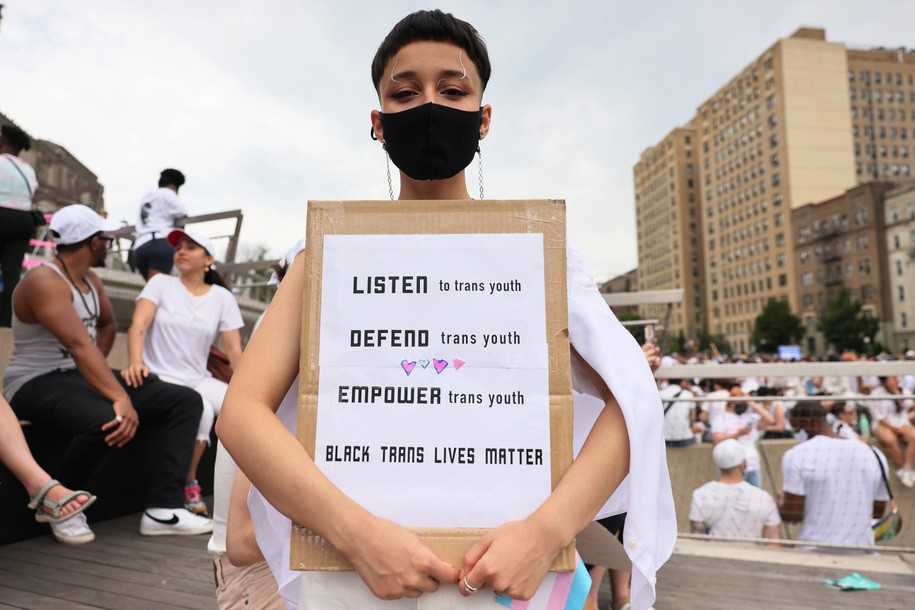 As Daily Kos continues to chronicle, school board meetings across the nation have been steadily picking up both local and national media attention, and for an important reason. Why? If it’s not people protesting mask mandates, it’s people speaking up for (or, sadly, against) trans rights. In both of these cases, the people affected are students and the people who work with them—teachers, janitorial staff, bus drivers, and so on. As reported by CNN, a school board election in the small town of Hastings, Minnesota, involves conservative hysteria on both masks and trans rights—and led to an 8-year-old trans girl being outed. After she was outed, she was allegedly bullied by her peers.

Who did the outing? According to CNN, anti-mask parents took it upon themselves to attack and out the little girl, who is the daughter of Kelsey Waits, the school board chair, because they disagreed with COVID-19 policies at the school. Waits, interestingly, is also a conservative but has enough decency to be pro-mask and supportive of her daughter. Now, she says she and her family are leaving the town altogether due to the harassment.

Waits, the mother of two children, was elected to the school board in 2016 even though she actually homeschooled her older child. Still, she won her election and served for two years before becoming chair. Waits ultimately lost her recent reelection bid. Waits told CNN she feels “betrayed” by her community—not because she lost her reelection by just over 400 votes, but because “not only did people attack a child, but so many of them sat by and allowed it to happen.”

Waits became aware of a secret Facebook group where conservative folks in her town talked local politics, including their stance against mask mandates. Given the current political climate, that’s not surprising, but what did ultimately surprise—and horrify—Waits is that someone allegedly posted revealing her daughter is trans. While Waits told CNN she and her husband affirmed their daughter’s identity and supported her, their child’s gender identity had been kept private.

One parent reportedly posted to the group saying Waits should be “locked up” for “child abuse” because she and her husband were affirming their child’s identity. Someone else commented and suggested the Waits had pushed their “woke” views on their child. From there, Waits said people started using the wrong pronouns for her daughter.

“You out a kid before they’re ready, you’re subjecting them to that sort of behavior that’s going to increase their risk of suicide,” Waits told CNN, adding that being on the school board is not about her kid, but about “protecting all kids.”

And now? The Waits family is moving. Not all families have the means to relocate due to abuse or harassment, and while the Waits are clearly doing their very best to support and protect their children, it’s deeply, deeply disturbing that mean-spirited adults in a Facebook group opened up a very young child up to this sort of harassment.

People are really, really letting their cruelty show when it comes to trans folks, and especially trans youth. We’ve seen stories about libraries having to cancel events for kids because of violent threats just because a facilitator happens to be trans, or because the books include marginalized identities. We’ve seen trans kids testify on behalf of their own rights—something that’s both incredibly brave and incredibly sad. Parents have spoken up on behalf of trans youth, thankfully, but community members have also taken the chance to stomp down on them, too.

There is absolutely no harm done by treating people—including children—with dignity and respecting their name, pronouns, and giving them fair access to bathrooms, sports teams, and so on. It’s basic. It’s truly the bottom of the barrel when it comes to actually being inclusive. But of course, Republicans will do whatever it takes to distract from their own failures—even when it means attacking little kids.