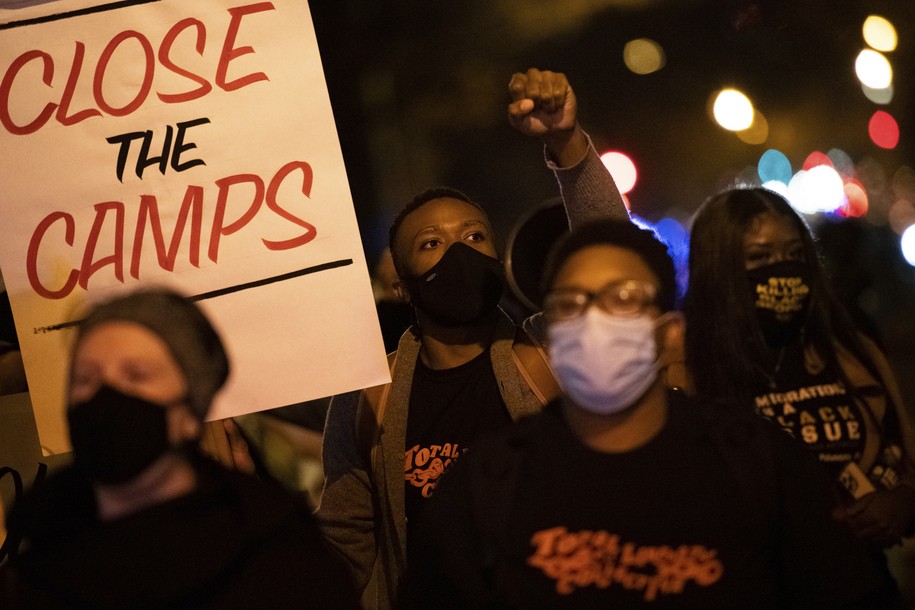 Immigration and Customs Enforcement’s (ICE) inhumane treatment of dozens of Haitian asylum-seekers detained at a New Mexico facility is now at the center of a civil rights complaint. Leading immigrant and civil rights groups allege “severe violations of due process and inhumane conditions” at the Torrance County Detention Facility, and urge the Department of Homeland Security (DHS) Office for Civil Rights and Civil Liberties (CRCL) and Office of Inspector General to open an investigation.

“This situation is especially egregious given that the Haitian men detained at Torrance entered the United States through Del Rio, Texas, and many were present at the encampment there,” the groups write. “We believe many were likely victims or witnesses of possible violations of federal law by law enforcement officers.” But advocates have previously said they’ve observed court dockets for Haitian asylum-seekers “moving disproportionately fast,” leading to quick deportations.

“These issues are exacerbated by violations of due process in the immigration courts, including improper immigration judge advisals and unusually rapid proceedings.”

In a sworn affidavit, attorney Allegra Love said that facility staff have blocked detained asylum-seekers from accessing legal counsel. “Facility staff have frequently denied the requests or have failed to respond to them for days,” she said. “Staff have told me that a legal call cannot be scheduled for several days because the scheduler is ‘out sick’ or ‘really busy’. Staff have told me to ‘try again next week,’ even if the person with whom I have requested to meet had an upcoming hearing for which they needed to prepare.”

An October letter from organizations including American Immigration Council has already noted how ICE purposefully made it hellish for detained people to try access legal help. For Black immigrants, it’s even worse, as Love said following a letter sent to ICE officials early last month. Despite continued public pressure, ICE has continued to deny asylum-seekers at Torrance their legal representation.

“For the last 42 days I have been begging ICE to provide us with information and access to the Haitian men detained at Torrance so we can provide them with critical pro-bono legal assistance and meeting resistance each step of the way,” Love said Nov. 9. “ICE is doing everything it can to deport these Haitian men without any semblance of due process. It’s racist, it’s wrong, and I am fed up with it.”

“People detained at Torrance, including the Haitian men, have reported dangerous conditions and medical neglect,” including one detained man who despite a serious medical condition was left on the floor for half an hour after collapsing, the new complaint continued. “Another man reported that he is losing weight and that his ‘eyes are sinking back in [his] head faster every day.’” The DHS inspector general has previously confirmed that immigrants have died due to ICE’s neglect. ICE has also falsified documents around detainees who have died in custody, a House investigation found last year.

The organizations noted in the new complaint that “staffing issues do not relieve ICE or Torrance of their obligations” to detained people. “If ICE is unable to staff the facility appropriately and provide individuals in its custody the services required by the written detention standards, ICE should release these people immediately.” Read the full complaint here.