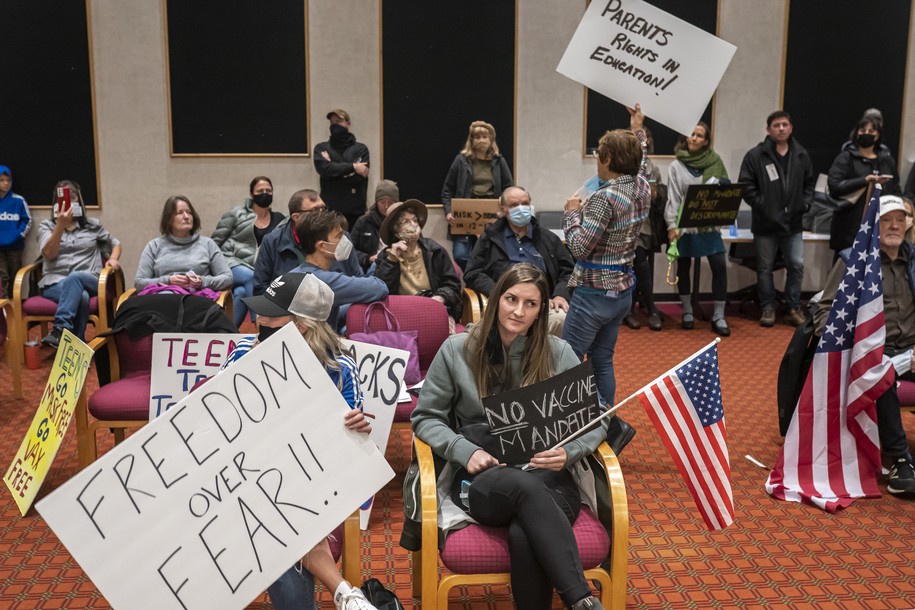 As the COVID-19 pandemic has unfolded we’ve heard an awful lot from the right—a near-constant refrain, in fact—about their “freedom.” The word itself has become a shibboleth, wielded like a bludgeon against any attempts to rein in the virus: Vaccine mandates? An infringement on our freedom! Closure of businesses? They’re killing our freedom! Masks? Social distancing? How dare you impose on our freedom?  The Republican Party, we are told, is the party of freedom: freedom of  enterprise, freedom from government, freedom from regulation.

So many freedoms are being claimed by these people, it’s getting hard to keep up. Interestingly, the word “freedom” never appeared in the original Constitution of 1787 (the watchword for that document was “liberty”) but was added in the Bill of Rights, specifically the First Amendment, to apply to various universal principles such as the “free” exercise of religion and freedom of speech.  The Second Amendment, according to the founders, was necessary to ensure the security of a “free” state, but beyond those two amendments there was really nothing explicating exactly what “freedom” was supposed to mean.

As explained by Gene Slater writing for The Atlantic, that omission left a considerable degree of latitude in defining what “freedom” actually portends in this country. Slater notes that in the mid-1960s during the heyday of the civil rights movement, Martin Luther King Jr. and others embraced “freedom” as the purpose of the movement’s struggle against discrimination and racism. In that context, given the nation’s lengthy history of slavery, white-inspired terrorism, and Jim Crow laws, the demand for justice and freedom was nearly impossible to refute, and for those who had a vested interest in opposing equality and civil rights, that presented a very serious problem: No one could risk being tarred as standing against such a bedrock principle as freedom, even if there was a whole lot of money and power put at risk. So the question for conservatives became: How do we maintain and exert control over groups whose own desire for equal rights served to challenge the traditional status quo, the established pecking order?

As Slater points out, the reaction of conservatives was to co-opt the term “freedom” itself:

The conservative use of the idea of absolute freedom, of freedom as your personal property, to shift American politics to the right came shortly after King’s speech, and indeed was a direct reaction to his argument that one’s own freedom depended on everyone else’s. This wasn’t an organic response. Rather, conservative activists and business leaders designed an opposite idea of American freedom to protect their own interests.

“Protecting their own interests” meant preserving the riches and wealth that flowed from the practices of discrimination and injustice, and nowhere was such discrimination and injustice more profitable than in the housing market. In fact, it was viewed as a necessity. As discussed by Slater, the relationship between racial segregation and the value of real property was well-established in this country long before the civil rights movement. The routine and accepted imposition of racial restrictions and the practice of “redlining” (denying credit, loans, insurance, and other services to Black and other ethnic neighborhoods because of perceived risk) were all well-established practices with the effect of permanently segregating minority populations from whites, thus preserving a regime of persistent, institutionalized inequality that haunts the country to the present day.

For realtors and the high-value white property owners they coveted, the rationale for such practices was the “idea that anyone selling to minority families was destroying the future of all the neighbors.”  As Slater explains, even after racial covenants in real estate transactions were outlawed, the realtors’ practice of “steering” whites to white neighborhoods, Blacks to Black neighborhoods, and denying Blacks and other ethnic minorities access to better housing in white areas continued unabated, such that by the mid-1960s “Black Americans were excluded from 98 percent of new homes and 95 percent of neighborhoods.”

But these practices were faced with a mortal threat in 1963 when California passed a law known as the Rumford Act (named for a veteran Black California legislator named William Byron Rumford) intended to curb discrimination in the sale and rental of homes. As Slater explains, in response, the state’s 40,000-strong contingent of realtors introduced Proposition 14, which in both word and effect explicitly permitted discrimination against ethnic and minority populations in housing.

The key language of that Proposition, which was duly approved by 65% of California voters, was this:

“Neither the state nor any subdivision or agency thereof shall deny, limit or abridge, directly or indirectly, the right of any person who is willing or desires to sell, lease or rent any part or all of his real property, to decline to sell, lease or rent such property to such person or persons as he, in his absolute discretion, chooses.”

You may want to read that language again, because it illustrates how American conservatives first co-opted the terminology of “freedom” by transforming it into an expression of individual rights—or so-called “freedoms”—in this case, a freedom (or license) to discriminate. As Slater puts it, in order to gain voter approval, “Realtors would need to secretly and systematically redefine American freedom as the freedom to discriminate—to challenge the idea at the heart of the civil-rights movement itself.” That is what Proposition 14 accomplished. By perversely couching the right to discriminate against others in terms of freedom, conservatives knew they could rely on the relative ignorance of American voters to get their measure passed. Who could argue with such noble-sounding language? Notably, the word “discrimination” never appears. Not surprisingly, the Proposition earned the support of the American Nazi Party and other white supremacist organizations.

Proposition 14 was deemed unconstitutional in 1966 by the California Supreme Court, a decision subsequently upheld by the U.S. Supreme Court. But the seeds for every subsequent right-wing perversion of the word “freedom” had been firmly planted. Slater explains how the president of the California Real Estate Association, Spike Wilson, had advised realtors to lobby for the Proposition’s passage:

The first step was inventing what became known as “color-blind freedom” to justify discrimination. Per Wilson’s request, the national Realtors’ organization created a secret action kit to oppose fair housing everywhere. The kit’s detailed scripts instructed Realtors to “focus on freedom” and avoid “discussion of emotionally charged subjects,” such as “inferiority of races.” This kit, weighing a pound and a half and distributed to the local real-estate board in every American city, provided form speeches, Q&As, and press releases for their cause. Freedom, the kit explained, meant each owner’s right to discriminate, and Realtors were in favor of “freedom for all”: the equal rights of all owners to choose whom to sell to. Realtors claimed that they, unlike civil-rights advocates, were color-blind.

Significantly, this is the same type of “color-blind” analysis espoused by current members of the United States Supreme Court in arguing, for example, against affirmative action. As Slater notes, what the proponents of Proposition 14 argued was not that Blacks or minorities were “bad,” but that allowing the government to protect them amounted to conferring “special privileges” on them: Proposition 14, realtors claimed, was not about race but about “the rights of the individual.’”

This line of reasoning, which equated protection from discrimination with some type of privileged status, and elevating the “right” of the individual to discriminate as part and parcel of his/her freedom, has been the bedrock of right-wing propaganda ever since. As Slater shows, Ronald Reagan, while running for governor of California in the wake of the Proposition’s revocation, adopted its language in his campaign.

Slater explains that this type of “freedom” language has been formulated and weaponized by conservatives to apply to any issue they choose: “abortion, guns, public schools, gender rights, campaign finance, [and] climate change.” In fact, as Slater observes, the more issues they apply it to, the stronger it becomes. Moreover, by framing it as a struggle between individuals and government, they could recruit allies from every social strata and political persuasion. Some version, some strain of this essential argument can be seen in every utterance and action by today’s Republican Party: “This picture of freedom has a purpose: to effectively prioritize the freedoms of certain Americans over the freedoms of others—without directly saying so.”

The consequences of this perversion of freedom are what we’ve seen from the foot soldiers of the right ever since the COVID-19 pandemic began. Because it is such a universal threat, any attempt at a unified response by the government was bound to run smack into this myopic and self-serving attitude cultivated by the Republican Party to justify its existence for the past five decades. It bleeds down into every Facebook post, every anti-vaxx meme, every protest against masking or social distancing, and it is echoed by every right-winger who invades a local school board meeting to bray about supposed infringements on his/her purported freedoms. And it’s the same rhetoric that corrupt and ideologically compromised judges use against any action taken by the Biden administration to contain the pandemic. From internet chat rooms to the federal courts, “freedom” is constantly trotted out by conservatives as a justification for not doing anything that might benefit Americans other than themselves.

It’s the same principle that drives legislation targeting trans youth under the phony rubric of “parental rights.” It’s the same rhetoric that supports bogus right-wing think tank-sponsored industry arguments against environmental protections. It’s the same twisted notion of freedom that allows an all-white jury to turn a blind eye when a white kid goes out of his way to threaten and intimidate protesters and ends up killing or maiming a few along the way. And it’s the same rationale that motivated some of the country’s worst specimens to attack the U.S. Capitol and members of Congress on Jan. 6.

This corruption of freedom by the right wing is fundamentally incompatible with democratic institutions or democracy as we know it. As the COVID-19 pandemic has amply demonstrated, it’s also incredibly dangerous to human lives. But the reality—for those willing to face it—is that the Republican Party stopped caring about such things a long time ago.