Madison Cawthorn’s eligibility to hold office is being challenged over role in Jan. 6 insurrection 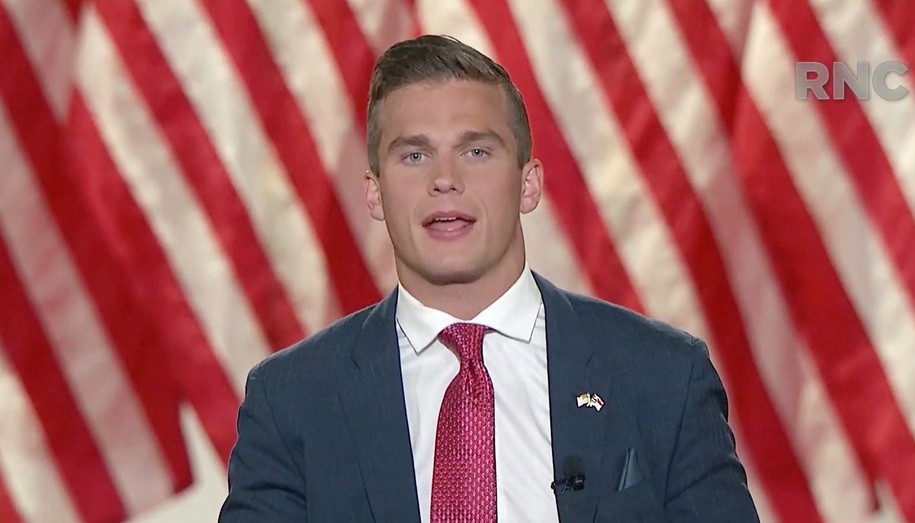 The House Republican caucus is at this point comprised almost exclusively of terrible people, but somehow North Carolina’s Rep. Madison Cawthorn is forever among the worst. It could be the weird Hitler fetish. It could be his habit of lying about his own past. It could be his promotion of conspiracy theories, his contempt for House rules, his support for sedition—wait, the last one might be worst. Having a weird desire to visit Adolf Hitler’s vacation home is sketchy, but looking to overthrow the government because Dear Leader believes Italian satellites turned all the ballots into bamboo (or whatever the hell he currently thinks) is definitely the most pertinent one here.

A group of 11 North Carolinians who definitely do not want a forever-lying fascism fetishist representing them have now filed a challenge to Cawthorn’s 2022 candidacy, and the challenge centers Cawthorn’s support for the attempted nullification of a U.S. election. The 14th Amendment of the Constitution, ratified immediately after the Civil War, bars those who mount an “insurrection” against the government from candidacy for federal office—and there’s a solid case to be made that Cawthorn’s personal actions to promote and abet the Jan. 6 insurrection fall squarely in the definition of “insurrection” the amendment (and over a century’s worth of court decisions) have spelled out.

So if we’re going to follow the Constitution, Cawthorn can’t serve. And if he can’t serve, he’s not allowed to run.

In the papers documenting their claim, the challengers are specific about which of Cawthorn’s actions are disqualifying. The plan by Trump allies (including, as we soon learned, numerous lawmakers) to have Vice President Mike Pence simply declare that the electoral votes of certain states should not be included was transparently illegal; the orchestration of a mass “march” with heavy extremist presence was a plot to intimidate Congress into going along with the scheme; either Madison Cawthorn or his staff were, according to published reports, in communication with the organizers of that rally and with Mark Meadows, then Trump’s White House chief of staff.

Cawthorn himself was vocal, in the days before the violence, in promoting the Big Lie—positing that the elections were “stolen” by fraud—a flat lie, as had been proven in countless courtrooms before that point. He boosted the Jan. 6 rally specifically, tweeting that “the future of this Republic hinges on the actions of a solitary few” and “It’s time to fight.” He further goaded the January 6 crowd in person, not long before the violence erupted.

That the scheme to bring an angry mob to the Capitol at precisely the time when Congress was meeting to validate the electors, specifically for the purpose of intimidating Congress into invalidating the election, was an assault on the legitimate transfer of power isn’t in doubt. None of those who helped organize and promote the event were shy in announcing that overturning the election was the explicit intent of the march, and that the crowd was meant to “fight” to make sure that happened.

And, of course, Cawthorn did more. Returning to the Capitol, Cawthorn was one of the Republicans who voted to reject the electors of the key Biden-won states, despite both the violence and the utter falsity of each of Trump’s already-disproven hoax theories. There was no case for it. Even now, after a full year of boosting the hoax claims, Cawthorn and the others have been unable to come up with any rationale for rejecting those electors other than the same hoax claims.

On the contrary, Cawthorn has spent the last year demanding that those arrested for violence inside the Capitol on that day be freed—and telling his supporters they “all need to be storing up some ammunition” to respond if elections “continue to be stolen.”

Take all this together, and it is clear that Madison Cawthorn took numerous hoax-premised actions specifically intended to nullify the election, overthrow the duly elected president, and put his party’s preferred leader into that slot instead. He tried to overthrow the government, and the Constitution says, despite any militia’s beliefs to the contrary, that you’re not allowed to do that.

Specifically, the Jan. 6 plot was an “insurrection” that succeeded in momentarily obstructing government function in an attempt to overthrow that government, and the 14th Amendment, passed immediately after the Civil War, bars those who participate in an insurrection from federal office, and there’s a whole mess of subsequent court decisions to define what “insurrection” means, winnowing it down to a very narrow meaning, and Cawthorn (along with at least several other House Republicans who provided concrete assistance to Trump’s plan) seems to have landed himself within the boundaries of even that.

So what happens now?

Well, let’s be realists here. There’s not a chance in hell that North Carolina’s State Board of Elections is going to agree that the Republicans who helped aid and abet a violent attack on the federal government aren’t allowed to run for office anymore. Such a decision would eliminate anywhere from a dozen to several hundred Republican candidates nationally. It was the Republican Party that assisted in Trump’s attempt at a propaganda-driven coup; he had assistance not only from individual Republican lawmakers but also from the party apparatus itself. Whether Trump himself engaged in an “insurrection” is almost certainly a decision that will be hashed out in courtrooms in the near future; that decision will likely inform how we speak of the allies that assisted him.

“We look forward to questioning him under oath,” attorney Ron Fein noted to the Associated Press. And that is probably the catch they’re most fishing for here. Not just State Board of Elections hearings on their challenge, but an opportunity to get Cawthorn on the record once and for all either supporting or distancing himself from the plot to erase an election. If he sticks to his guns even under oath, it’s solid evidence that he intended “insurrection” according to the 14th Amendment’s framework. If he doesn’t … Donald Trump will be mad at him. Very, very mad.

Fein says we can expect more challenges like this one, and he’s assuredly right. While the press and the Department of Justice have both been extremely slow in acknowledging just how serious and multi-pronged the Republican attempt to nullify the presidential election truly was, there’s little question that for the organizers of the Jan. 6 rally and their numerous lawmaker allies, erasing a valid presidential election was the whole point. It was intended as a toppling of Constitutional government. It’s one that Republicans are still pursuing with new state-level laws designed to knock out the obstacles that stood in Trump’s way the last time around.

Cawthorn unquestionably attempted to topple our government. But he’s still in Congress right now because his fellow Republicans support those efforts themselves.