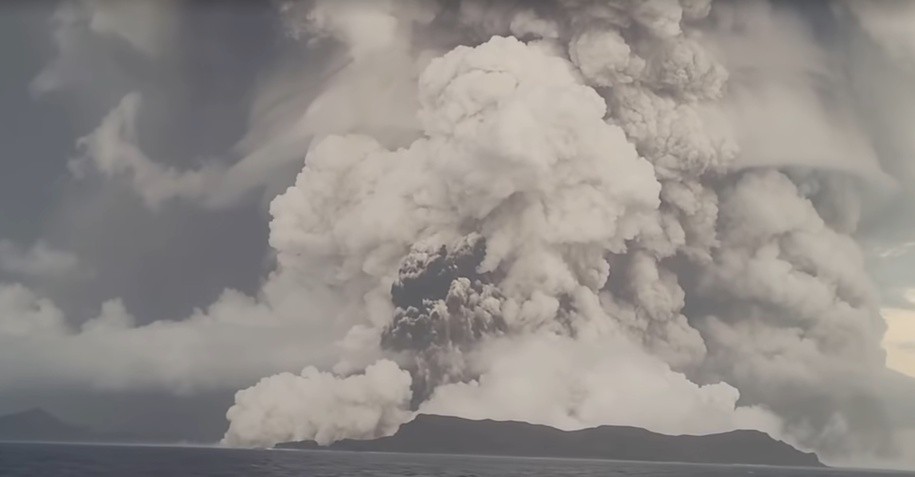 On Friday, the United States logged over 800,000 new cases of COVID-19 and 2,300 more COVID-19-related deaths. It capped off a week in which the nation recorded an incredible 4 million new cases over a seven-day span, and in which some sources have indicated that the real limit on that number was simply the U.S. hitting the boundary for available testing.

And so the omicron variant is raging across all 50 states, Kyrsten Sinema and Joe Manchin continue to put their egos ahead of preserving democracy, and a major winter storm is sweeping across much of the nation, bringing snow, freezing rain, and a whole lot of mid-winter misery.

But what’s plaguing the U.S. isn’t close to what happened overnight in Tonga.

Watch. You’ll probably want to watch it a couple times.

On Friday, a series of eruptions began at the Hunga Tonga-Hunga Ha’apai undersea volcano near the Kingdom of Tonga. Some hours later, an enormous underwater eruption blew right through the southern Pacific ocean, creating a sonic boom heard hundreds of miles away and creating a tsunami that struck the island of Tonga, as well as other islands in the region. The videos of the event—taken both by satellites and from boats nearby—is an awe-inspiring reminder that we live in a geologically active world, where hard to predict events can occur that can immediately add a whole different perspective to everyday life.

In these images from Japanese weather satellite Himawari 8, its’ easy to see the shock wave racing away from the site of the explosion at the speed of sound.

More imagery. This time marked up, to give an idea of relative location of inhabited islands—and a better sense of just how vast this explosion really is.

Huge volcanic eruption near Tonga. Reports of tsunami there and it’s gone pitch black. Lots of lightning too. #tonga pic.twitter.com/Eia4fidPRc

The sharp crack of a sonic boom, followed by thunder-like noises, were heard in Fiji, over 800 kilometers (500 miles) away. Other observers report hearing the sonic boom in New Zealand, 2600 kilometers (1600 miles) from the site of the eruption.

Images from the ongoing eruption are also being broadcast by the state television channel in Fiji.

The eruption triggered tsunamis in Tonga and on other nearby islands. Tsunami warnings have been issued for sites as far away as Hawaii and Australia. Updates indicate that while no large tsunamis are expected in these locations, residents should be alert for unusual tides and currents.

Tsunami videos out of Tonga 🇹🇴 this afternoon following the Volcano Eruption. pic.twitter.com/JTIcEdbpGe

It’s unclear how much loss of life has resulted from this explosive eruption, or the long-term effect it will have on Tonga and surrounding islands. There are, thankfully, no reports of injuries as of early Saturday. The population of Tonga itself is just over 100,000. It’s a poor nation; 22% of people live below the poverty line. It’s also the last constitutional hereditary monarchy in the South Pacific. The whole kingdom consists of 171 islands, many of them low-lying and likely to be hard hit by this event.

As far as “just how big was this eruption?” That’s not yet clear. On the Volcanic Explosivity Index, it’s likely to be 5 point something—that is, somewhere between Mount St. Helens and Krakatoa. That’s bad company to keep at close range.

But … it’s not the worst possible.