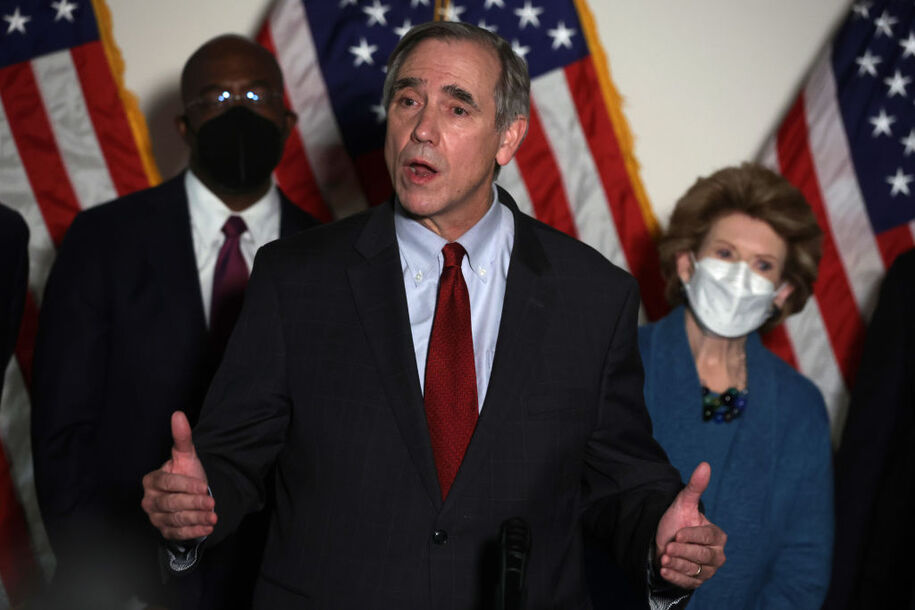 Despite what you might be hearing from Republicans and Joe Manchin and Kyrsten Sinema, the proposal Senate Democrats will advance for reforming the filibuster to pass voting rights is carefully thought-out—even conservative. It is, in fact, restorative. Rather than blowing up the Senate, it would recover a small part of its long-gone distinction as the world’s greatest deliberative body. Because it would deliberate again.

Sen. Jeff Merkley, an Oregon Democrat, has devoted much of his 11 years in the Senate to finding a way to make the body work again, to get rid of the filibuster entirely, if possible, to figure out a way to make it work barring that. “Let’s restore the filibuster,” he said last week on MSNBC. “If you’re going to have the leverage that comes from slowing things down, which is considerable, you have to be on the floor giving speeches. It is a public act and America can weigh in—are you heroes or bums?”

“The talking filibuster says you have leverage and you can slow things down, but you have an incentive to negotiate because you’re doing the painful work of being on the floor. And the majority has an incentive to negotiate because they’re in the painful situation of floor-time being eaten up by the minority—and that’s the most valuable thing we have.”

Merkley’s chief of staff, Mike Zamore, explains how the Senate Democrats’ proposal “can meet the red lines” Sinema and Manchin have laid down, “enhance the values they say they prize and still restore the Senate and create a pathway to get important things done, including the critical voting rights legislation,” Zamore writes. “We don’t need to touch the 60-vote threshold to cut off debate at all—we need to bring back the talking filibuster as a separate, alternative approach to finishing legislation.”

Manchin and Sinema are right that the path back for the Senate from today’s partisan gridlock is not to end debate by majority vote. Instead, it’s to restore the option of exhausting debate. By reinvigorating the talking filibuster and another 233-year-old rule limiting senators to two speeches on a given issue, the Senate can restore the balance that has been missing and has turned the filibuster from a tool empowering the minority to shape bills into a veto producing “tedious delays; continual negotiation and intrigue; contemptible compromises of the public good,” as predicted by Alexander Hamilton when he warned against supermajority requirements.

Knowing that the time has to be filled, that no senator can speak more than twice on a legislative day on a single issue and that no other business will go forward until the bill in question has been hashed out, debated, negotiated and then, finally, voted on when no other senator wants to keep talking. In that restoration, the minority would still have plenty of leverage. If all 50 of them in today’s senate wanted to talk for 5 hours, that would make for at least 500 hours of debate. Real debate.

And, as Zamore writes, if they’re willing to put in that kind of work, “the majority would have a strong incentive to negotiate because weeks or months of floor time are a precious and scarce commodity.” He adds that there would be plenty of incentive as well for the minority to put that work in actually negotiations “in order to avoid the pain of actually speaking at great length on the Senate floor, something missing with today’s secret, silent, filibuster.”

At the end of all those hours of debate, the presiding officer calls for a vote and they vote. And the majority wins. Because, as Merkley says “Ultimately, our republic is founded on the theory that after robust debate, you choose the path championed by the greater number, not the lesser.”