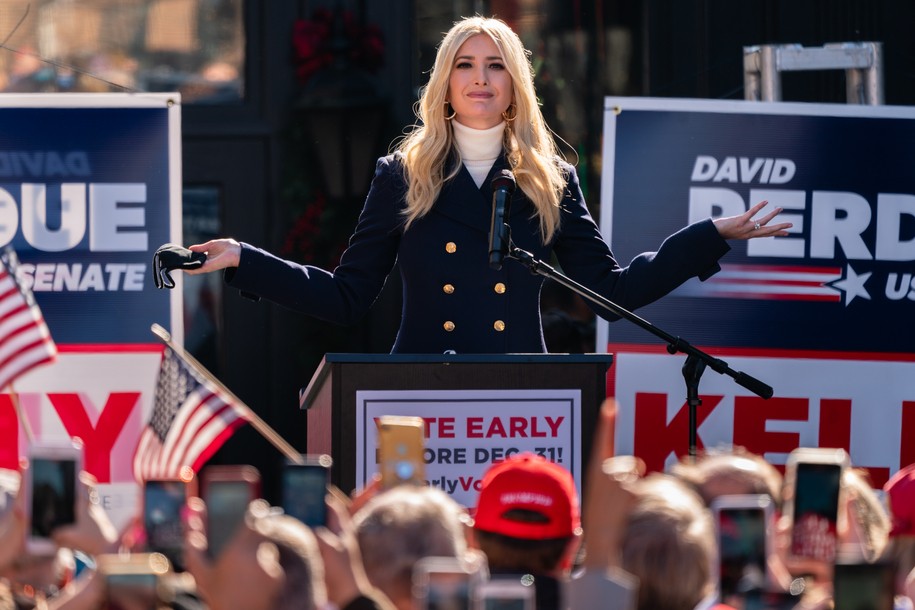 Ivanka Trump, who once addressed the mob storming the U.S. Capitol as “American patriots” on Twitter before swiftly deleting the post, has been requested to voluntarily cooperate with the Jan. 6 committee’s investigation.

In a letter to the former president’s daughter and onetime adviser, committee chairman Bennie Thompson said the panel confirmed from Keith Kellogg, former Vice President Mike Pence’s national security adviser, that Ivanka was present when Trump called Pence on Jan. 6 and pressured him to throw the election so he could remain in power.

Ivanka heard just one side of that phone call, the committee acknowledged, but between that and the testimony and records already provided to the committee, Ivanka appears to have been so up close and personal with her father on Jan. 6, that she could have unparalleled information about his exact mindset that day.

Kellogg, according to the committee, told investigators that when Trump was getting ready to end the call with Pence on Jan. 6, Ivanka turned to Kellogg and remarked: “Mike Pence is a good man.”

In addition, the committee also requested that the former president’s daughter offer details she may have about other discussions she witnessed, particularly those involving Trump’s plans to obstruct or impede the physical counting of electoral votes on Jan. 6.

“White House counsel may have concluded that the actions President Trump directed Vice President Pence to take would violate the Constitution or otherwise be illegal. Did you discuss those issues with any member of the White House Counsel’s office?” the committee asked Thursday.

The committee also noted that just before the Capitol attack, a “member of the House Freedom Caucus with knowledge of President’s planning for that day” sent a message to then-White House chief of staff Mark Meadows saying if Trump allowed the counting of votes—in other words, a critical part of the transition of power from one administration to the next—then “we’re driving a stake in the heart of the federal republic.”

Ivanka was also allegedly called on multiple times during the melee to wrangle her father. The committee noted media reports about Sen. Lindsey Graham, who called her at least once during the riot and pleaded with her to have Trump issue a statement.

Kellogg said he urged Trump to act with haste but Trump’s obstinance was so severe that, according to another interview conducted by the committee, staffers recognized it might only be Ivanka who could persuade him to act.

In a brief transcript that accompanied the request to Ivanka, that deposition was laid out:

Q: Did you think that she [Ivanka Trump] could help get him [President Trump] to a place where he would make a statement to try and stop this?
A: Yes.
…
Q: So you thought that Ivanka could get her father to do something about it?
A: To take a course of action.
…
Q: He didn’t say yes to Mark Meadows or Kayleigh McEnany or Keith Kellogg but he might say yes to his daughter?
A: Exactly right.

Evidence already obtained by the committee has shown many Trump administration officials and other hangers-on were in frantic contact with the White House as the riot exploded, calling on Trump to act. Those individuals reportedly include Donald Trump Jr., Fox News hosts Laura Ingraham, Brian Kilmeade, and Sean Hannity, as well as “multiple members of Congress and the press, Governor Chris Christie and many others.”

In a text exchange from someone “outside of the White House,” an individual asked a White House staff member: “Is someone getting to POTUS? He has to tell protesters to dissipate. Someone is going to get killed.”

The response was chilling.

“I’ve been trying for the last 30 minutes. Literally stormed in outer oval to get him to put out the first one. It’s completely insane.”

The committee said Thursday this dynamic was of particular interest.

“Why didn’t White House staff simply ask the President to walk to the briefing room and appear on live television to ask the crowd to leave the Capitol?” the letter noted. “General Kellogg testified he “very strongly recommended they do not” ask the president to appear immediately from the press room because press conferences tend to get out of control and you want to control the message. Apparently, certain White House staff believed that a live unscripted press appearance by the president in the middle of the Capitol Hill violence could have made the situation worse.”

By the time Trump finally released a video message that was filmed in the Rose Garden asking the mob to disperse—while also telling them he “loved” them and they were “very special”—Ivanka had already been pleading with her father for two hours.

The committee has been informed that multiple unused clips from Trump’s speech exist in the National Archives and were part of the presidential records transfer that Trump attempted to block.

Beyond the phone call with Pence, the committee also asked Ivanka to disclose any information she might have about the delayed response for backup to beleaguered U.S. Capitol and Metropolitan Police Department officers.

Then-acting Defense Department secretary Chris Miller testified under oath that former President Trump never contacted him at any time on Jan. 6 and never, again, at any time, issued him any orders to deploy the National Guard.

“The committee has identified no evidence that President Trump issued any order, or took any other action, to deploy the guard that day. Nor does it appear that President Trump made any calls to the Department of Justice or any other law enforcement agency to request deployment of their personnel to the Capitol,” Thompson wrote.

Ivanka could also have insights into how Trump behaved after the insurrection.

Texts from Sean Hannity to Mark Meadows and former White House press secretary Kayleigh McEnany, for example, showed how Trump was being urged to drop the election fraud talking point.

On Jan. 7, Hannity messaged McEnany and provided her with a strategy to deal with Trump:

2. Yes, impeachment and 25th amendment are real and many people will quit…”

McEnany responded: “Love that. That is the playbook. I will help reinforce…”

She also agreed with him when the right-wing pundit told her it was “key” that Trump stop entertaining “crazy people.”

Any correspondence or other records that Ivanka might have produced in her capacity as a former adviser to the president is required, under the Presidential Records Act, to be preserved and remitted to the National Archives.

In a particularly pointed portion of the request to Ivanka Trump, the committee attached a 2017 memorandum from former White House counsel Don McGahn where he had once outlined the legal requirements for records preservation for White House staff.

McGahn was a key figure in the Mueller investigation of interference in the 2016 election and was instructed by Trump not to comply with a subpoena from the House Judiciary Committee.

The committee has proposed a meeting with Ivanka Trump for Feb. 3 or Feb. 4.

The former president’s daughter and adviser released a statement through a spokesperson Thursday saying “as the committee already knows, Ivanka did not speak at the January 6 rally.”

The spokesperson continued: “As she publicly stated that day at 3:15 PM, ‘any security beach or disrespect to our law enforcement is unacceptable. The violence must stop immediately. Please be peaceful.”

Notably, her spokesperson did not include the “American Patriots” salutation Ivanka put at the very top of that same statement from just after 3 p.m. on Jan. 6.

Ivanka Trump sent this tweet just after 3pm during the January 6th attack, and left it up for about half an hour before deleting it. In real time that’s when Officer Fanone was dragged out into the crowd and tazed and Officer Hodges was crushed in the doorway https://t.co/h6liZjlCHf