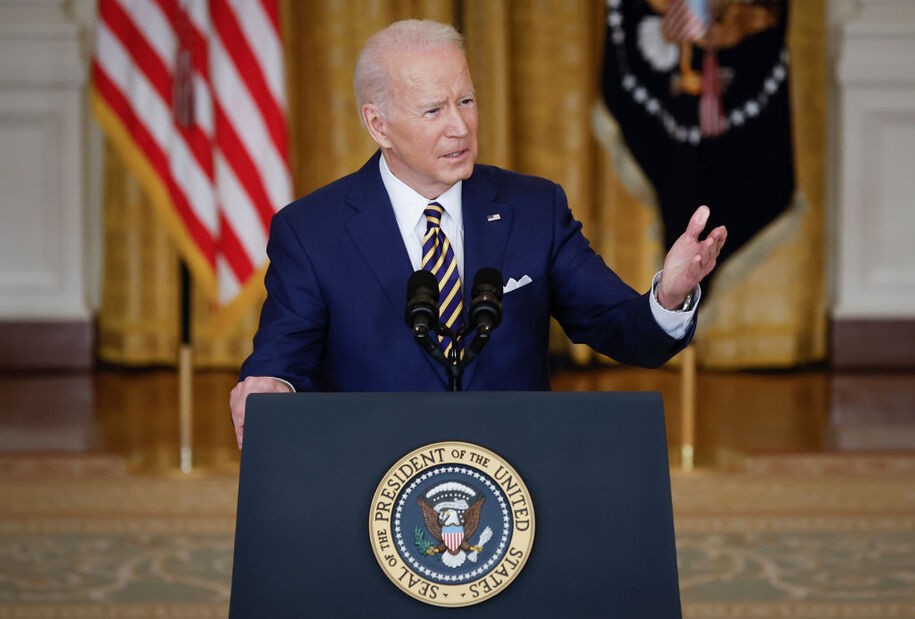 President Joe Biden dared to acknowledge that Republicans don’t have the warmest view of fair elections these days, and a series of media big names are very concerned about Biden acknowledging it. Not about Republicans attempting to overturn a presidential election and then passing laws making it harder to vote, among other efforts to use legislation—rather than appealing to voters—as a way to win future elections.

Let’s look at what Biden said—all of what he said on the subject, no cherrypicking.

First he was asked, “Speaking of voting rights legislation, if this isn’t passed, do you still believe the upcoming election will be fairly conducted and its results will be legitimate?”

THE PRESIDENT: Well, it all depends on whether or not we’re able to make the case to the American people that some of this is being set up to try to alter the outcome of the election. And it’s one thing—look, maybe I’m just being too much of an optimist. Remember how we thought not that many people were going to show up to vote in the middle of a pandemic? We had the highest voter turnout in the history of the United States of America. Well, I think if, in fact—no matter how hard they make it for minorities to vote, I think you’re going to see them willing to stand in line and—and defy the attempt to keep them from being able to vote. I think you’re going to see the people who they’re trying to keep from being able to show up, showing up and making the sacrifice that needs to make in order to change the law back to what it should be. And—but it’s going to be difficult. I make no bones about that. It’s going to be difficult. But we’re not there yet. We’ve not run out of options yet. And we’ll see how this moves.

In short: Republicans are making it hard for Black and brown people to vote (fact) because they think it’s their best path to victory. Trump and many, many Republican candidates are promoting the Big Lie that Biden’s 2020 win was illegitimate. They have tried to overturn that election, and they are bringing that mentality to 2022—but Biden is optimistic that voters will show up despite, or even because of, the efforts to keep them down.

It was Biden’s response to the next question that has media panties in a twist.

Q   Thank you, sir. I just wanted to clarify: A moment ago, you were asked whether or not you believed that we would have free and fair elections in 2022 if some of these state legislatures reformed their voting protocols. You said that it depends. Do you—do you think that they would in any way be illegitimate?

THE PRESIDENT: Oh, yeah, I think it easily could be—be illegitimate. Imagine—imagine if, in fact, Trump has succeeded in convincing Pence to not count the votes.

THE PRESIDENT: Imagine if—go on.

THE PRESIDENT: Oh, 2022. I mean, imagine if those attempts to say that the count was not legit. “You have to recount it and we’re not going to count—we’re going to discard the following votes.”

I mean, sure, but—I’m not going to say it’s going to be legit. It’s—the increase and the prospect of being illegitimate is in direct proportion to us not being able to get these—these reforms passed.

Biden lays out a clear scenario: “Imagine if, in fact, Trump has succeeded in convincing Pence to not count the votes.”

Okay, but 2022? “Imagine if those attempts to say that the count was not legit. ‘You have to recount it and we’re not going to count—we’re going to discard the following votes.’”

This is being treated by many in the media as an outrageous thing to say, but Republicans have a pretty damn clear road map here. Georgia Republicans have been replacing county-level elections officials they didn’t like—Black ones, in particular—with white male Trump supporters.

Donald Trump recently told Pennsylvania Republicans that he was focusing on supervisor of elections races in 2022 because “We have to be a lot sharper the next time when it comes to counting the vote … Sometimes the vote counter is more important than the candidate. They have to get a lot tougher and smarter.” That the 2020 election was stolen and should have been overturned is a widespread article of faith among Republican candidates for office—including at least 15 who are running for secretary of state, usually the top official overseeing elections in a state. Elections officials have faced serious harassment and intimidation.

And that’s all in addition to the stuff Republicans usually do, like partisan gerrymanders and voting requirements that just so happen to fall most heavily on groups that typically support Democrats in large numbers.

”It’s never good for [a] president to sow seeds of doubt in the legitimacy of American elections unless he has some sort of overwhelming reason … and I do not see that,” CNN’s Jake Tapper pontificated. Man, you witnessed an attempted violent coup 54 weeks ago and you don’t think there’s reason to worry that the legitimacy of American elections is already under attack, regardless of what the president says?

He was explaining that the results would be illegitimate if states do what the former president asked them to do after the 2020 election: toss out ballots and overturn results after the fact. The Big Lie is putting our democracy at risk. We’re fighting to protect it.

This is widely being described as “clean-up,” rather than, say, “We were too up our own asses to understand the first time around, so someone had to explain it again.”

Can I lay out the difference for you guys in simple language you might be able to comprehend? (If you weren’t so wrapped up in both-sidesing everything, anyway.) On the one hand, we have someone who literally called the Georgia secretary of state and demanded that he “find” enough votes to give Person A the win, overturning the election results. The same person has recently said, “Sometimes the vote counter is more important than the candidate.” Is it difficult for you to draw a line between those two things, Jake?

Person A’s party, which has largely lined up behind his lies that the 2020 election was stolen, has been aggressively passing new laws governing elections and in some places moving to take control of, yes, the vote counters.

On the other hand, we have Person B, who is suggesting that if these behaviors continue and are controlling factors in the 2022 elections—in particular if votes are thrown out after the fact—that could create a legitimacy problem.

I dunno, seems like Person B has a point, to a degree that even Very Serious, Highly August Media Figures like Jake Tapper would be able to see if Persons A and B didn’t have partisan labels attached to them that required the Tappers of the world to portray them as exactly equivalent at all times.