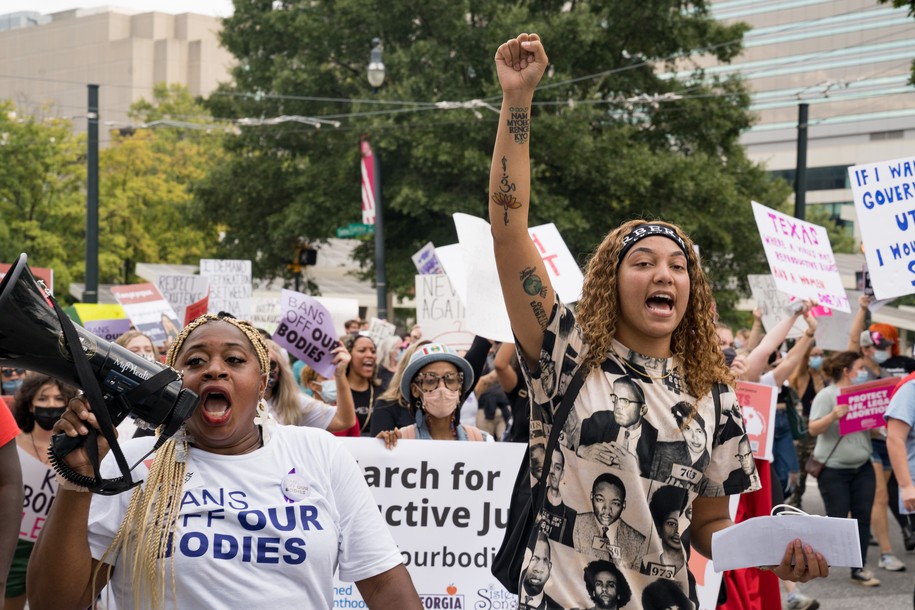 The White House reaffirmed its commitment to protecting reproductive rights in preparation for the 49th anniversary of the groundbreaking Roe v. Wade decision protecting abortion rights on Saturday. White House Press Secretary Jen Psaki made note in press remarks on Friday of the Supreme Court ruling last month to allow a Texas ban on abortions after six weeks, a decision many considered early evidence of the high court’s inclination to overturn Roe v. Wade.

“Reproductive healthcare has been under extreme and relentless assault ever since, especially in recent months,” Psaki said. “It has been nearly 150 days since women in Texas have been denied these constitutional rights. We’re deeply committed to making sure everyone has access to care, and we will defend it with every tool we have.”

“We will defend it with every tool we have.” In honor of the 49th anniversary of Roe v. Wade, Psaki says the Biden administration will fight for reproductive rights https://t.co/NQbnoMyGX3 pic.twitter.com/lgNoU9PV8c

She advocated for the federal Women’s Health Protection Act, which would block states from banning or restricting abortions. “This is the moment for us to recommit to strengthening access to critical reproductive healthcare, defending the constitutional right established by Roe, and protecting the freedom of all people to build their own future,” Psaki said.

The constitutional right established in Roe v. Wade nearly 50 years ago today is under assault as never before. It is a right we believe should be codified into law, and we pledge to defend it with every tool we possess. We are deeply committed to protecting access to health care, including reproductive health care—and to ensuring that this country is not pushed backwards on women’s equality.

In recent years, we have seen efforts to restrict access to reproductive health care increase at an alarming rate. In Texas, Mississippi, and many other states around the country, access to reproductive health care is under attack. These state restrictions constrain the freedom of all women. And they are particularly devastating for those who have fewer options and fewer resources, such as those in underserved communities, including communities of color and many in rural areas.

The Biden-Harris Administration strongly supports efforts to codify Roe, and we will continue to work with Congress on the Women’s Health Protection Act. All people deserve access to reproductive health care regardless of their gender, income, race, zip code, health insurance status, immigration status, disability, or sexual orientation. And the continued defense of this constitutional right is essential to our health, safety, and progress as a nation.

We must ensure that our daughters and granddaughters have the same fundamental rights that their mothers and grandmothers fought for and won on this day, 49 years ago—including leaders like the late Sarah Weddington, whose successful arguments before the Supreme Court led to the landmark Roe v. Wade decision in 1973.

At this pivotal moment, we recommit to strengthening access to critical reproductive health care, defending the constitutional right established by Roe, and protecting the freedom of all people to build their own future.

Taking a decidedly hypocritical stance considering many of their support of former President Donald Trump’s efforts to risk American lives during the coronavirus pandemic, anti-abortion advocates across the nation traveled to Washington on Friday to attend a rally on the National Mall to “march for life.” It was a pledge activists made in 1974 on the first anniversary of the historic Supreme Court decision, The Guardian reported.

“We’ve been building to this moment,” Victoria Cobb, president of the Family Foundation of Virginia, said during a virtual panel the newspaper covered. The organization backed Justice Amy Coney Barrett’s confirmation to the Supreme Court.

“We heard justices say that precedent shouldn’t be upheld if it was incorrectly decided in the first place,” Cobb said. “That’s a big deal.”

A big, disappointing and unAmerican deal it is, in fact.

Although one of the Supreme Court’s provisions maintains that abortion providers have the right to challenge the Texas abortion ban in federal court, the Supreme Court on Thursday denied a request that a federal judge be able to act immediately to block the law’s effect.

“It has been over four months since Texas Senate Bill 8 took effect,” Justice Sonia Sotomayor wrote. “The law immediately devastated access to abortion care in Texas through a complicated private bounty-hunter scheme that violates nearly 50 years of this court’s precedents.”

She had earlier predicted in a 48-page dissent a trickle-down effect of allowing states to “nullify federal constitutional rights by employing schemes like the one at hand.”

My disagreement with the Court runs far deeper than a quibble over how many defendants these petitioners may sue. The dispute is over whether States may nullify federal constitutional rights by employing schemes like the one at hand. The Court indicates that they can, so long as they write their laws to more thoroughly disclaim all enforcement by state officials, including licensing officials. This choice to shrink from Texas’ challenge to federal supremacy will have far-reaching repercussions. I doubt the Court, let alone the country, is prepared for them.

“In 2021, bans and restrictions on abortion reached the highest rate in nearly 50 years. More than 600 new abortion restrictions were proposed in 2021 alone, and more than 100 were signed into law.

When lawmakers block people’s right to decide their own future and make life decisions with abortion bans, everyone is hurt. But no one is harmed more than people for whom systemic racism and discrimination have already limited health care access.”

The Supreme Court heard arguments last month in another case about whether a Mississippi law banning abortions after 15 weeks of pregnancy should be upheld. The court “seemed poised” to allow the law, New York Times journalist Adam Liptak wrote, also describing such a decision as an outright departure from the Roe v. Wade restriction prohibiting states from banning abortions “before fetal viability, or around 23 weeks.”

The six conservative justices on the court were split on whether to ban abortions at 15 weeks or toss out Roe all together. Solicitor General Elizabeth Prelogar, who represents the Justice Department in the case, said during arguments that the questions at hand are why a woman would need an abortion after 15 weeks and what the effects are on them. “And there are any number of women who can not get an abortion earlier,” Prelogar said. “They don’t realize that they’re pregnant. That’s especially true of women who are young or (…) haven’t experienced a pregnancy before, or their life circumstances change as you refer to Justice Sotomayor. They lose their job or their relationship breaks apart, or they have medical complications, or for many women, they don’t have the resources to pay for it earlier.”

Prelogar said they may have to arrange time off work or childcare. “And for all those women in this category who need access to abortion after 15 weeks, the fact that other women were able to exercise their constitutional rights does nothing to diminish the impact on their liberty interests in forcing them to continue with that pregnancy,” Prelogar said.

Reproductive rights are under attack in Texas, but you can help. Chip in $3 or more to support one of nine organizations fighting to keep abortion accessible in the wake of the passage of Texas’ new vigilante law.