Even while dying in the hospital, he can’t quit anti-vaxx sh*t-posting on Facebook 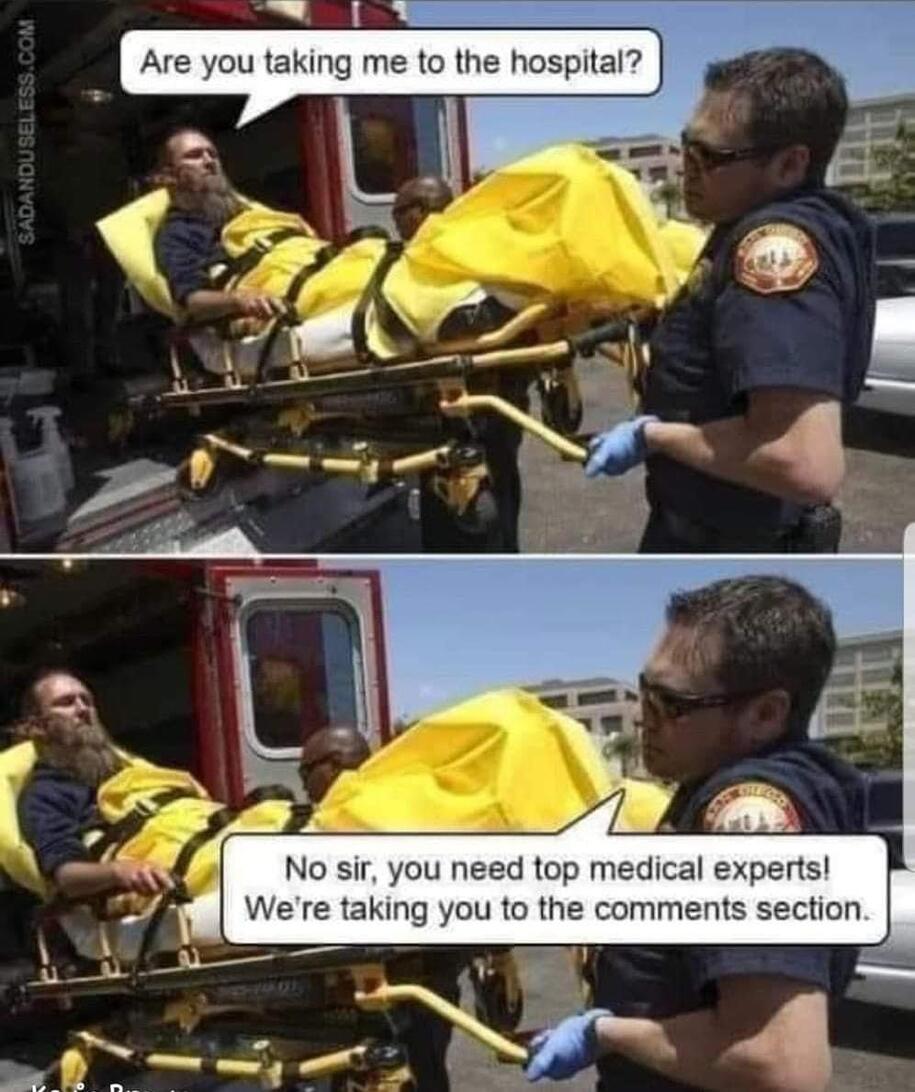 This series documents stories from the Herman Cain Awards subreddit, tracking the COVID mis- and disinformation on Facebook that is leading to so many deaths. Today’s cautionary tale hails from Texas.

I can’t fathom being so far up Trump’s ass that you rapturously post memes like this one.

Weird how his fan boys want to plaster his face over their walls as if he were their favorite member of the Backstreet Boys (“he’s the stupid, mean one!”). But really, this orange Cheeto was easy to attack on looks. Too bad we had so many more substantive reasons to attack him.

It’s not dinner. It’s the third meal of a nourishment effort that has already failed twice.

Women are ruining the Bible!

Donald Trump accused of fondling the genitals of minor boys. We can have so much fun accusing people of stuff!

I did look into this claim, and it turns out that no flights brought border crossers into the United States. Instead, unaccompanied minors in crowded facilities on the U.S. side of the border were flown to other temporary housing locations. And not sure what’s so “secret” about it. The Department of Health and Human Services noted that they were being transferred to the New York metro area, where people aren’t assholes to immigrants, nor children, nor even immigrant children.

Hey look, the shit hit the fan, and … looks like feminists are being just as helpful:

But wait, you say, can a feminist also carry a baby in a disaster zone?

Amazing. They can! Also, I visited this guy’s Facebook page. Let’s just say that he isn’t going to be carrying no woman anywhere.

This is an actual claim floating around these nutso circles. The fact check explains:

The 108 figure initially surfaced in a Hebrew-language article on Real Time News, a website which describes itself as a media organization with “a deep sense of mission and a desire to bring about a fundamental change in public consciousness” (bit.ly/3pnvnrm).

In the article itself, published on Nov. 13 (here), the writer claims 108 “professional athletes, coaches, college and youth athletes” have died since December 2020 […]

In 53 cases, a cause of death was reported. These include heart attacks brought on by previously known or unknown heart conditions, while others included prior COVID-19 infections, a cerebral aneurysm, a traumatic brain injury, a motorbike accident, one suicide, two suspected suicides, heat stroke, and a rare congenital condition – anomalous origin of coronary artery.

Moreover, one case was reported in August 2019, prior to the pandemic, and another had a family confirm their relative was not vaccinated.

Of all of those, only three had unconfirmed speculation about the vaccine, yet this one piece of misinformation has now morphed into 100 soccer players.

Reuters presented the claims to FIFA, world soccer’s governing body, which reaffirmed its statement to Reuters in November: “FIFA is not aware of a rise in episodes of cardiac arrests as indicated in your email and no cases have been flagged in relation to individuals receiving a COVID vaccine.

Any FIFA soccer player dying of anything would be huge news. You can’t cover that shit up. It’d be like Tom Brady dying. Yet these assholes have invented this out of whole cloth.

Coincidentally, NBA Hall of Famer John Stockton repeated this lie yesterday or today, which was the first I had heard of it until I read this Herman Cain Awardee’s story.

Oh yeah? For what?

There he goes, running to science when shit hits the fan. I’m sure he requested to be nursed only by manly masculine men, as they are the only ones able to manage shit hitting the fan. Surely, no feminist can care for him.

Luckily, he took a necessary break from recovery to shit-post the latest bullshit from the Angel of Death herself.

He’s in the hospital, drowning as COVID ravages his lungs. But sure, the vaccines are the real problem.

I’m going with the latter. She knows she’s full of shit, but it’s lucrative. So the grift continues.

It’s not just the bad information. It’s the confidence with which they deliver it!

You cannot make homemade hydroxychloroquine with lemon and orange peel.

And breathing hydrogen peroxide via a nebulizer? That works! Well, it works if you want to die.

You know how they claim that the government is blaming every death on COVID? Well, as usual, it’s just conservative projection.

The odds are good. But let’s take that 99.87% at face value. There are 115,000 commercial flights every year day [thanks for the edit, guys]. At those odds, that means 149 flights would crash every day.

Would you get on a commercial flight? Would Candace “Angel of Death” Owens?

YOU’RE IN THE HOSPITAL SUFFERING FROM THE PANDEMIC.

It’s not the Dems panicking from lack of oxygen.

Oh great, he’s got a comorbidity too.

There’s no such thing as COVID, it’s just the body detoxing. Detoxing itself of life, apparently. And also horse paste. Take lots of that, with a side shot of real masculinity. Because when the shit hits the fan, masculinity is the only recourse.

Anyway, this guy is now in the ICU, telling people as of this morning that he’ll be home in four or five days. Maybe he makes it, but if he does, it’ll be because of science. Despite having a Facebook feed full of Jesus talk, it’s the science he continues to spurn that is keeping him alive.

If he truly believed in the shit he’s posting, he would’ve gone to a church instead, and pumped himself up with hydroxychloroquine and ivermectin. Maybe inhaled some poisonous hydrogen peroxide for good measure.