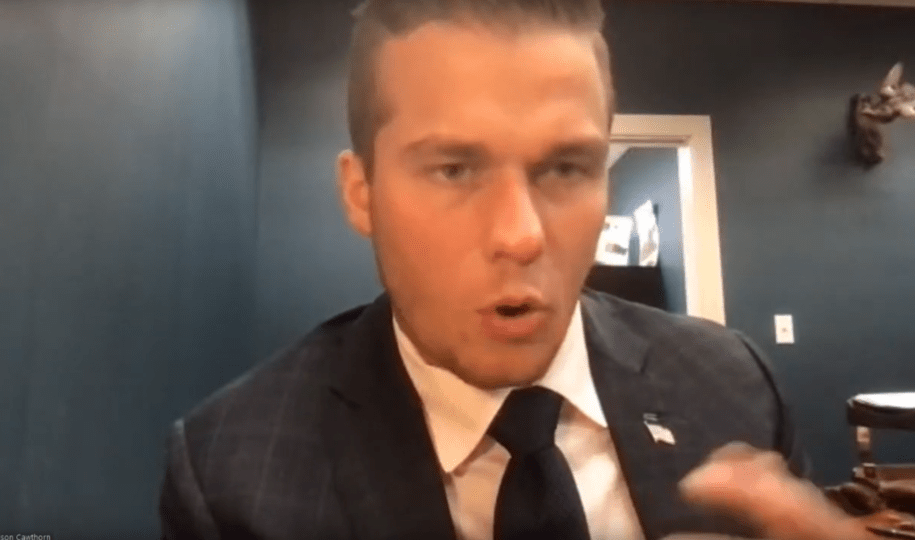 Two weeks ago, we learned that a group of fed-up North Carolina voters had filed a challenge to Madison Cawthorn’s 2022 congressional candidacy with the state’s Board of Elections, citing Cawthorn’s involvement in the Jan. 6 insurrection as disqualifying according to the U.S. Constitution.

It’s an argument that has some weight to it. The Constitution’s 14th Amendment, ratified after the Civil War, specifically bars those who mount “insurrection” against the United States—or aid and abet those who do—from holding federal office. It was passed to block Civil War traitors from waltzing back into Congress to pick up where they left off. While the Jan. 6 coup attempt was responsible for far less loss of life than the Civil War version, it was still unquestionably an “insurrection,” and far-right conspiratorial Republicans like Cawthorn quite certainly aided and abetted it.

If the entire Republican Party weren’t filled with sedition-backing fascists still aspiring to scrub out election results rather than abide the nation’s citizens booting them from power after particularly egregious screw-ups or shows of corruption, this wouldn’t even be a conversation. The party would have expelled those who attempted to nullify an election and supported their immediate expulsion from Congress. Cawthorn’s only remaining business inside the U.S. Capitol would be as a testifying witness.

All of this is only “controversial” because such a large proportion of top Republicans “aided and abetted” the hoax of an “invalid” or “rigged” or “stolen” election that they have been able to form a self-protection racket. The House cannot expel its insurrectionist members because there are so many of them they can block the votes for their own expulsion.

Cawthorn, however, is unfortunate enough to represent a state that had pre-written rules about these things, and the North Carolina rule is that if somebody comes up with a credible challenge to your candidacy, it’s on you, not them, to resolve the issue. That means that Cawthorn will only appear on the ballot if his legal team is able to convince the board and/or state courts that he did not aid and abet an insurrection, and that all the video of him seemingly aiding and abetting the insurrection is, um, not that.

So then. What’s been happening since?

Well, short version: Not a damn thing. That’s because the North Carolina congressional maps are changing, and Cawthorn still hasn’t decided which district he’s even going to try to run in. So the challenge to his candidacy is being put on hold by the board until there is a candidacy to challenge. Cawthorn appears to be taking his own sweet time deciding which of the numbered districts he’s going to claim to be the heart and soul of, so we could be here for a while.

Of course, each passing week brings the eventual decision on Cawthorn’s ballot qualification one week closer to Election Day, and given that the heart of the case is expected to be the challenger’s much-anticipated chance to force Cawthorn into under-oath testimony about his involvement with the Jan. 6 insurrection, there’s not necessarily an advantage for Cawthorn in putting things off.

And that right there is the catch to all of this. Cawthorn’s challengers are represented by a high-powered legal team and are asking the Board of Elections to oblige Cawthorn to turn over documents and sit for testimony, and so far everyone seems to be in agreement that it’s probably going to happen. There’s ample public evidence of Cawthorn’s involvement, including his efforts to help assemble the Jan. 6 crowd; his public promotion of false conspiracy theories discrediting the election and demanding its nullification; specifically violent public rhetoric urging the insurrectionists to “fight”; and his specific support, after the violence took place, for freeing the arrested insurrectionists from prison.

Cawthorn called the jailed insurrectionists “political hostages” and demanded their release. After the violence, mind you.

Cawthorn’s legal team has to come up with a theory as to how that’s not aiding and abetting those who engaged in insurrection. Cawthorn’s challengers would very much like to oblige them, and Cawthorn himself, to make those justifications out loud.

Note that Cawthorn has, if anything, become even more untethered from reality and decorum in the aftermath of the insurrection—such as when he spent a videotaped House hearing fondling and cleaning a handgun.

As for the actual odds of Cawthorn being tossed from the ballot, it’s hard to say. In The New York Times, Jonathan Weisman assembles enough legal opinions to suggest that this is not, in fact, something that Cawthorn will be able to get out of quickly. The odds of Cawthorn having to sit for deposition appear high; no matter what the board itself decides, after both sides have made their case, it seems certain that a state court will have to make the final decision.

But it all hinges on whether Cawthorn’s support for the insurrectionists, and support for invalidating the election via a hoax, counts as “aiding and abetting.” Given that Cawthorn’s entire persona is bragging about aiding and abetting an attempt to erase an election, and given that there’s just no possible way he won’t be spouting similar statements on the campaign trail regularly between now and the day a decision is made, he may be one of the few Republicans in the country who actually faces an even-odds fight when it comes to facing consequences for trying to topple the government. Maybe.