Ukraine update: How did Kherson fall so quickly? Betrayal looks like a good bet 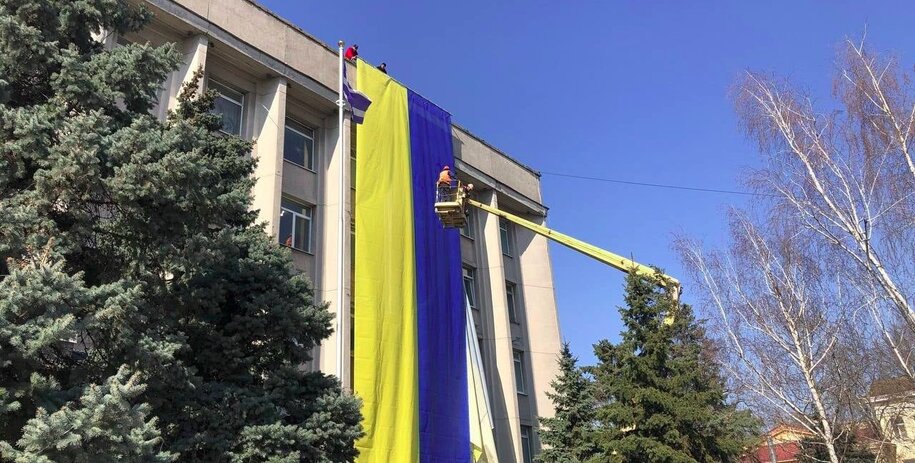 With Russians conceding their humiliating loss at the Battle for Kyiv, there is a massive artillery barrage to cover for … something. A retreat? A reconfiguration? We don’t know. Lots of fog of war right now, and we can’t trust anything Russia claims. Look at NASA FIRMS satellite imagery of the region:

Remember, not every red dot here is combat-related fire. Many are agricultural fires, as farmers clear out old vegetable matter by burning it, using the ash as fertilizer. Could also be related to fossil fuel production. But the imagery is still an excellent way to determine front lines. And here you can see northwest Kyiv is under heavy bombardment, as that rind of red dots is actually behind the front lines. Covering fire makes sense. But the heavy shelling of Chernihiv? That makes less sense, since Russia claimed they were pulling out of the whole axis. Clearly, they’re not.

Sumy is quiet in the wake of the defeat of the 4th Guards Tank Division, which was  clearly leading the artillery barrage of the city. Kherson also looks relatively peaceful. We haven’t had any news from the area for a couple of days now. Kharkiv is seeing some action on the northern front, as well as the southern edge of Zaporizhia, where a local counter-offensive has led to a few new liberated villages. The Donbas front is under relentless fire. Russia really, really, really wants to punch through there.

Mark Sumner wrote earlier about the status of peace talks in Turkey, and of Russia’s desire for this swath of land:

Russia would certainly love to walk away with something like this, but it’s not the full extent of their imperial ambitions. For that, let’s look at the Novorossiya Project, an attempt to recreate an old imperial Russian province that spanned from the modern Donbas separatist region, all the way to Odesa. The word Novorossiya literally translates to “New Russia.”

With this territory under its belt, Russia would have its land bridge to Crimea, it would deny Ukraine a Black Sea port, dramatically hurting its economy, and it would extend its hegemony over both the Sea of Azov, and the entire northern Black Sea. Indications are that Russia tried to bribe local leaders pre-invasion, in a region with higher-than-average pro-Russian sentiment.

According to @bellingcat the Russian FSB paid billions of $ to ensure that some shadowy political class in Ukraine supported this war & created an internal coup d’état immediately after the invasion. But Ukrainian agents who took the money ditched them.They just screwed them over

One of the likely targets was Odesa Mayor Gennadiy Trukhanov, a member of a pro-Russia political party. He’s also facing serious political charges in an anti-corruption investigation by federal prosecutors in Kyiv, and is by all indications, a mafia-style gangster. Russia had a lot to offer him—the kind of immunity it grants all of its oligarchs. Instead, he vowed to fight and prepared his city to resist an amphibious assault that never arrived (and won’t). Ukrainian regular army units defending the city have moved to the Kherson front as Ukraine retakes lost territory outside the city of Mykolaiv—territory that was lost because Kherson’s territorial defense forces didn’t fight, and they didn’t blow the main bridge connecting the city with Russian forces coming up from Crimea. As a result, Kherson still remains the only major Ukrainian city to fall to Russia.

This article in Russia’s Novaya Gazeta (link runs article through Google translate) gives us clues as to what happened.

How did you take Kherson? “Stupidity or betrayal, perhaps both,” says former governor of the Kherson region Andrei Gordeev.

The article quotes that former governor, saying defensive plans included both flooding the region, as was done near Kyiv, as well as blowing the two major bridges over the Dneiper on the south side of Kherson. “The Dnieper, the Antonovsky bridge, keeps to the last, if anything, it explodes, and Kherson seems to be out of hostilities,” Google translates the former governor as saying. “[T]here is no bridge, we are just guarding the water line. Fuck him who will cross, the Dnieper.”

According to Gordeev, all of these defenses could’ve been deployed in a single day. Instead, none of them were. Instead, the newspaper reports that “Incumbent Governor Gennady Laguta, according to colleagues, on the first day of the [special operation] put the keys on the mayor’s desk with the words: “I do not participate in this” – and left the region.” Furthermore, “Together with him – on the first day of the special operation – the leadership of the police, the prosecutor’s office, the courts left, and a little later SBU officers were evacuated.” (SBU officers are Ukraine’s intelligence officers.)

While other cities competently recruited, armed, and deployed their territorial defense forces—civilian partisans, Kherson seemingly willfully neglected theirs. “I go to this commander of the defense, say: ‘Dima, what is it?’ He didn’t even have a map of Kherson on his desk. Do you understand? Volunteers resorted during the day, stood near the military enlistment office, did not know what to do.” TDF volunteers lined up at a base waiting for their weapons that never arrived. They were told to wait, wait, and wait, until eventually, the commander told them never mind, he had evacuated. Their desperate effort to cobble together any kind of resistance cost them 67 TDF soldiers, and that guy who died blowing one of the two bridges. But in the end, the main bridge survived.

So the question, which I highlighted above, is whether it was stupidity or betrayal that cost Ukraine the city of Kherson—a loss that is costing them dearly in blood. Maybe the answer is simple—did the governor run north, into Ukraine, a coward? Or did he flee south, into the arms of Russia. Given the sums of money Russian intelligence was handing out, the latter might be the best bet.

But this story is also one of hope, because this could’ve easily been the story of that entire region of Ukraine, seduced by FSB payoffs, handing over entire cities without a real fight. Things might look different if Mykolaiv, Odesa, Zaporizhia, Kharkiv, Sumy, and lots of other smaller cities had taken Russia up on its offers. Instead, Ukraine held fast everywhere except in Kherson, and the rest has been history.

A succinct summary of significant changes today. By tomorrow, there should be a better signal if Russia’s statements about Kyiv and Chernihiv have any meaning.

Izyum is on the eastern side of Ukraine, right at the end of one of those little arms of control that Russia extended in the first week of fighting. Unlike Mariupol, it’s not located far from areas of Ukrainian control, and may be in a position where it could be more easily relieved. However, it is in an area where Russian forces have had a chance to dig in and expand their control beyond the highway corridor. This is certainly one of those locations to watch over the next few days when it comes to seeing whether or not Ukraine can regain territory and bring assistance to these towns that Russia is literally starving to death.

Ukraine’s Ambassador to the UN @SergiyKyslytsya opening tonight’s meeting on the humanitarian situation in Ukraine by stating: “I would like to inform you that the demilitarization of Russia conducted by the Ukrainian Army and supported by the Ukrainian people is well underway”. pic.twitter.com/PKTEHAYHr9