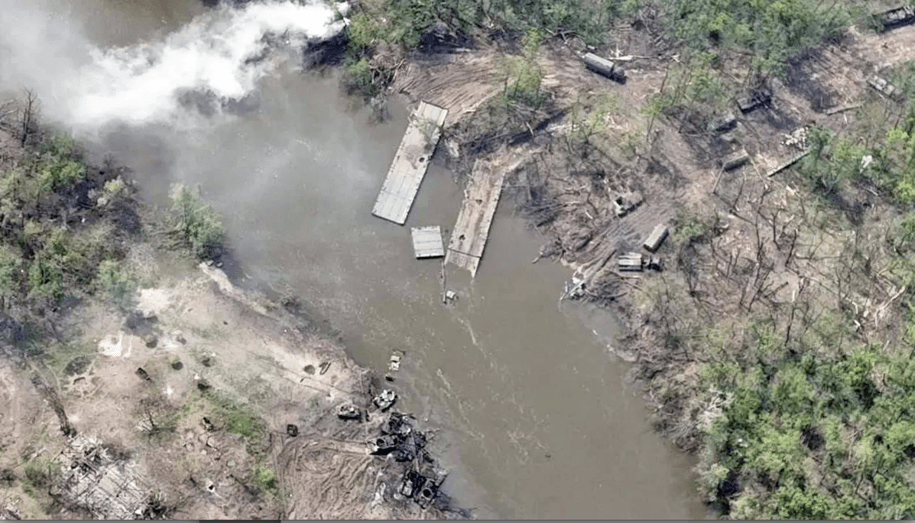 It’s said the definition of insanity is doing the same thing over and over again while expecting a different result. If that’s the case … Russia qualifies.

We saw it in the early days of the war in Hostomel airport northwest of Kyiv. Russia made an unsupported airborne landing on the base. Got wiped out. Tried it again. Same result. There may have been a third attempt, but the airport wasn’t captured until the spearhead of Russia’s attack, on the ground, arrived a few days later.

We’re currently seeing it on Snake Island, of “Russia warship, go fuck yourself” fame. Over the past week, Russian forces have been wiped out several times (here, here, here, and here), and yet last night we saw Russian troops landing there once again. (Russia state media tried to claim that it was Ukrainians who were defeated on the island … using the Ukrainian armed forces video (with their logo on the top right corner) featuring the Bayraktar TB-2 drone interface, of which Russia has none. The destruction of the ship, when Ukraine has no navy, was a nice touch of hilarity.)

But nothing is as dramatic as the saga of the riverside crossing at Bilohorivka, where Russia didn’t just suffer one disastrous river-crossing attempt, but three of them over the past few days.

Rubizhne, top right, was captured by Russia this week. Severodonetsk, on the right, is currently hell on earth, Russia’s current number one target, being hit on three sides and under relentless months-long bombardment. As I noted earlier, Severodonetsk is on the north side of the river, so its Ukrainian defenders can, if needed, retreat across the river to Lysychansk, where the river provides natural protection.

Given that Russia will eventually need to cross the river, they clearly thought, why not now, allowing them to completely surround Severodonetsk, cutting off its defenders, and short-circuiting any fall back positions in Lysychansk. Bilohorivka was such an obvious place to make the attempt, that this Ukrainian army engineer claimed to have guessed it ahead of time (account is unconfirmed, but much of it checks out).

Russia made its first effort May 8, and it was utterly decimated, destroying several dozen vehicles. The bridge lay half-sunk.

Russian command and control structure is highly centralized, giving local commanders zero ability to deviate from stated orders. So if high command said “get to Bilohorivka,” well, who was to say something like, “Guys, Ukraine has our number, maybe we should look for a new place to cross?” Nah, giving local commanders, or any commanders for that matter, the gift of “free thinking and initiative” might lead to a military coup. Best to keep them stupid. Hence … try number 2:

You can see the remnants of that first bridge just above it, either completely submerged or towed away during the second attempt. More charred vehicles were added to the list.

Then someone from Moscow or Belgorod called and screamed, “do we have Bilohorivka yet?” And since the answer was no, then yeah, sigh, there they went again.

The open source intelligence (OSINT) crowd got to counting the damage, or at least, what could be determined from drone footage. Just photo after photo tagged like this:

A tally of Russian losses from the infamous failed Russian Siverskyi Donets river crossing near Bilohorivka. In total 73 Russian equipment were destroyed/abandoned, including a BTG worth of AFVs. Great thanks to J.P. for counting and sending it to me. 1/2#Russia #Ukraine pic.twitter.com/FyKtPogG8Z

The vehicle count keeps rising as the OSINT folks find more vehicles amongst the wreckage. The latest? 82.

Those 82 vehicles include eight in the river. The tally includes 14 tanks and 62 infantry fighting vehicles. A Russian battalion tactical group (BTG) has 10 tanks and 40 IFVs, but there’s no such thing as a full-strength BTG in Ukraine. Likely never was. So Russia just lost two BTGs worth of troops attempting to make the same compromised river crossing three times. Can you imagine the drone operator calling it in?

Artillery fire direction: “Shit! What are the coordinates?”

Artillery fire direction: “Ha! Okay, I really thought you were kidding the second time! That was crazy. But seriously, what are the new coordinates?”

That engineer I linked to above claims 1,500 dead, citing “rumors.” That would suggest two nearly full-strength BTGs, so is almost certainly overstated. InformNapalm, which has been covering the war since 2014 and has sources inside Ukrainian intelligence, claims that only 65 of 550 Russians attempting the crossing survived. While ~490 dead seems plausible, only 550 Russians attempting the crossing seems low. A single BTG would have 600-1,000 soldiers, so 550 would only staff one undermanned BTG.

Russia has 22 BTGs in this axis, so in this ill-fated multi-effort river-crossing debacle, it has lost nearly 10% of its entire fighting force. But hey, why stop when they’re so close to succeeding? Here’s hoping they’re stupid enough to give it a fourth shot.

And if you think I’m joking, from that InformNapalm report:

After [the third attempt], other servicemen of the brigade began to write “refusal”, but the zampolits [political commissar] tried to intimidate them with prison terms and exert psychological pressure.

Also, InformNapalm sources report that they saw a car in this direction today, which is visually very similar to the mobile point of psychological work of the Russian Armed Forces. Probably for the psychological treatment of the servicemen of the brigade, which suffered heavy losses.

If that report is correct, it means Russia is literally trying to force its soldiers to give it yet another shot. Hopefully those soldiers choose wisely—prison seems far preferable than whatever fate met the poor souls on those three bridging attempts.

More context on river crossings, from a retired Australian general:

2/ This Russian river crossing has gained attention because it resulted in the loss of (probably) a battalion tactical group and some critical engineer equipment. The reality is, it is worse than that. https://t.co/aQD7QGHOxc

I forgot to mention that many of the vehicle in the satellite imagery looked abandoned rather than destroyed. There might be a nice bounty for the Ukrainian armed forces.