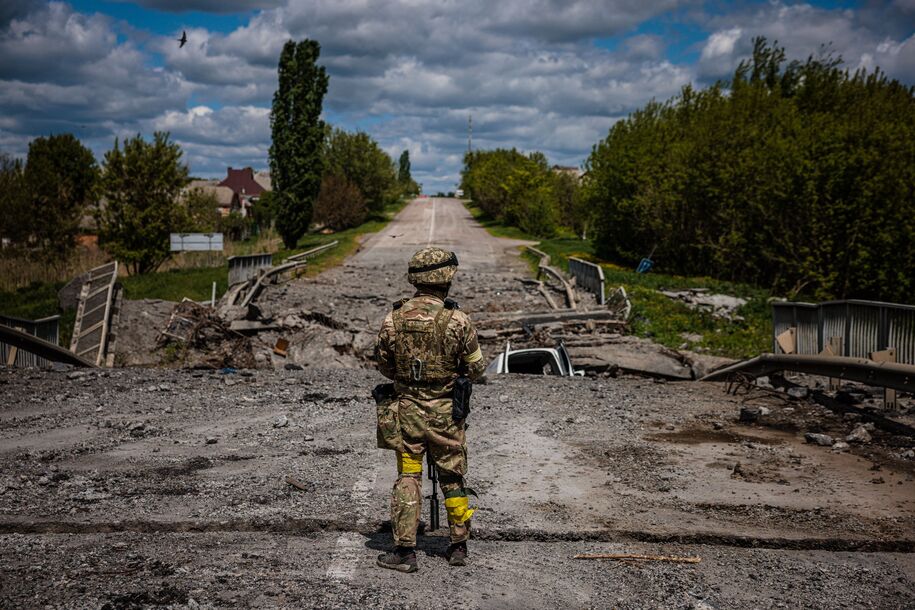 The Siverskyi Donets River has already played an outsized role in Russia’s invasion of Ukraine. East of Izyum, Russian forces attempted to cross the river three times with disastrous consequences that kos has documented in detail. In the east, Ukrainian forces in Severodonetsk, the last Ukrainian stronghold on the east side of the river, may be forced to move back to the west bank of the river, using its natural protection to halt a Russian advance. In the north, Ukrainian forces moving northeast from Kharkiv raced to the town of Staryi Saltiv in an attempt to capture the bridge there, then bombarded a sequence of towns further north in hopes of finding an intact crossing that would allow them to bring forces to the east side of the river, menacing Russian supply lines.

Unfortunately Russia blew up that series of bridges in the north, just as Ukrainian forces have taken down several bridges in the east. It may have seen that Ukrainian forces were just as hemmed in by the river’s rapid flow, which has been bolstered by recent spring rains, as the Russians have been in their own attempts to cross.

Except … maybe not. Because it seems that Ukraine has crossed the river anyway, and at a position that could be incredibly important: Staryi Saltiv.

The bridge at Staryi Saltiv is incredibly long, over a kilometer and a half, because the river there is not a river but a lake—a reservoir held back by a large hydroelectric dam. So of all the places that Ukraine might cross, at first glance this would seem among the least likely. However, from the moment Ukraine maneuvered around other villages and shocked Russian forces by capturing Staryi Saltiv, Ukraine began an artillery bombardment of the area directly along the eastern end of that bridge. It certainly seemed that they had some interest in what was going on across the river.

Every single village and town on this map was held by Russia when the Ukrainian advance out of Kharkiv (just off map to the left) began three weeks ago. That little curve of yellow line represents the actual border, where Ukrainian forces posed for a picture on Sunday before installing a bright new boundary marker.

Now there are reports that Ukraine has sufficiently repaired the lengthy bridge to move forces across and establish a bridgehead on the eastern bank. There are even reports that Ukraine has moved out from that location to capture two nearby villages. None of this has officially been confirmed by the Ukrainian Ministry of Defense. However, it is coming from some of the reliable sources that first reported the Ukrainian advance on Ternova last week. There are other, even less confirmed reports that Ukraine may have crossed the river at another point further north, using a pontoon bridge. Take both of these reports with a good dash of salt, but since there are Russian Telegram messages complaining about the Ukrainian forces on “their” side of the river, maybe not that much salt.

From this bridgehead, Ukraine could go … just about anywhere. They might move north to threaten the rail and road junction at Vovchansk. They might move southeast toward the even more critical supply depot at Kupyansk. Mostly they are loose in Russia’s backfield, able to maneuver toward towns and cities in a way that will require Russia to turn still more forces away from the salient at Izyum, or the battles in the east.

In fact, former Russian military officer Igor Girkin, who is still stinging from the fact that he didn’t become the leader of the Donetsk area after the 2014 invasion, reports that Ukrainian forces on the east side of the river are already probing toward Vovchansk.

Russia’s primary response to the wave of Ukrainian advances from Kharkiv has been to withdraw its forces across the border. Only in a very few remaining villages are Russian forces continuing to fight west of the Donets rather than simply move on. However, just because Russia is pulling out of the Kharkiv area doesn’t mean the Ukrainian forces that won back that area are content to simply sit on the recaptured land.

Now Ukraine is threatening Russian supply lines in the rear. And Ukraine is pushing hard against the Izyum salient in a series of attacks that seem designed to destroy Russian forces positioned there. And Ukraine is continuing to keep Russian advances in the east to a snail’s pace. And Ukraine is feeling much more free to involve its air force directly in combat (even though Russia claims to have somehow shot down dozens of Ukrainian jets in just the last week).

If you’ve wondered why Girkin is allowed to speak so openly about Russian disasters while still being in Russian-controlled territory—and frequently passing along images of Russian equipment or troops shuffling from place to place—here are a few ideas.

A few words on the question of why Igor Girkin is allowed to speak so openly about failures of the operation in Ukraine. Just my opinion, open to contributions of any followers and viewers. pic.twitter.com/Aj39vVheAM

Reports on Ukrainian activities east of the river are coming in fast and with a lot of conflicting details at this point. For example, here’s one that leans heavily on the idea that Ukraine crossed well north of Staryi Saltiv and is harassing villages in that area.

According to RU sources, the Ukrainian army has expanded their area of control east of the Siverskyi Donets river and are probing the roads to Vovchans’k. pic.twitter.com/RJqiuPmt2l

Here’s another that reports the crossing at both locations, as well as the capture of Zarichne, which would be a significant expansion of Ukraine’s position on the eastern bank.

Map: Ukrainian forces have reportedly crossed the river Northwest of Rubizhne(Kharkiv Oblast) and are advancing towards Vovchans’k also they have advanced east of Staryi Saltiv and taken the town of Zarichne(Unconfirmed). pic.twitter.com/RtTAbYYZtn

Perhaps the best confirmation is the number of angry texts from Russians who seem extremely concerned about what’s going on to the north while they’re all marching to the south.

Putting this one up because Ruser is a reliable source, and because the last map — the one with all the yellow — does a good job showing how much of what Russia initially captured has now been lost.

Putin’s War – May 16th Map Briefing. Today there are unconfirmed but reliable reports that Ukrainian forces have crossed the Donets river near Kharkiv and taken up positions in 2 villages. Russia captured a village near Lyman and Adiivka. 4th map shows recaptured land in yellow. pic.twitter.com/Su07hU8XD4

Best picture of the war so far. This is the result of the failed Russian attempt to cross the Siverskyi Donets River a few days ago. 70+ vehicles destroyed and hundreds of Russian soldiers killed. Via @noclador pic.twitter.com/leKybnFUGQ

Russian army standard procedure when your comrades are running over a mine and are smoldering and barely alive: Speed up right beside them to distract the other mines. If they are surprised enough, they won’t explode and everybody will be fine in the end.pic.twitter.com/KE6QJUmY18

Azov regiment may have surrendered in Mariupol. Still trying to sift details.

Sounds like a surrender agreement was worked out. Possible prisoner exchange.

Zelenskyy will personally tell all the information on Azovstal in his evening address.

For the moment, it’s not clear anything is happening at Azovstal beyond a deal involving the evacuation of a limited number of servicemen. Earlier reports that this was some kind of end to resistance in Mariupol appear to be an exaggeration.

President @ZelenskyyUa: “A difficult day. But this day, like all others, is aimed at saving our country & our people. I want to emphasize that Ukraine needs Ukrainian heroes alive.” The leader who values human life. 266 Ukrainian servicemen were evacuated from Azovstal as of now pic.twitter.com/XlO9usWo4W