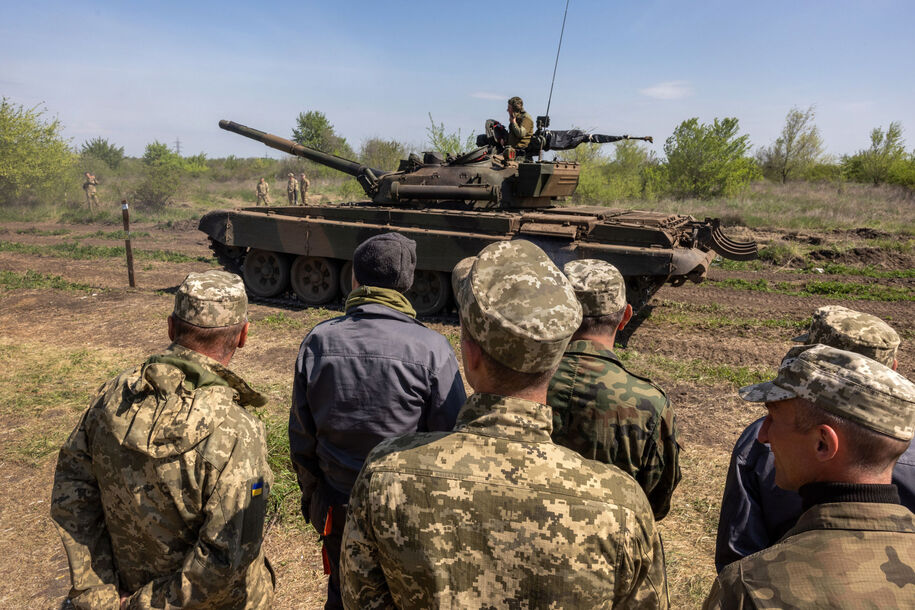 Yesterday, we discussed the hyperventilation over Russia’s Popasna advance, the one place on the entire Texas-sized country of Ukraine in which they’ve had some recent success. Today? “There have been no notable changes to control since the last update.” I expect that advance to stall, but already?

Here’s the Institute for the Study of War:

4.We still not have observed open-source evidence for the Russian breakouts around Popasna that pro-Russian telegrams claimed on May 20. NASA FIRMS data from the past 24 hours does not observe heat anomalies that would track with heavy fighting in breakouts near Popasa. pic.twitter.com/rYnzjpVGC5

One relatively quiet day doesn’t mean the front is stalled like in the Izyum salient, where early Russian gains petered out at around 25 miles from town. But I will keep saying it until Russia proves everyone otherwise—that’s about the distance limit of Russia’s rickety supply system to support any offensive actions. So no, I don’t expect Russia to complete the encirclement unless they can make something happen crossing the Donets near Severodonetsk, which would be the northern end of this pincer movement.

I highlighted the Donets River with a dark red dotted line, which Russia has struggled to cross under intense Ukrainian artillery and ground resistance. In fact, there were reports today of a fourth failed crossing. Looking forward to drone footage confirmation in the coming days.

Remember, Russia’s clear goals after taking Izyum on April 1 was a sweeping pincer maneuverer to capture the entire Donbas region (comprised of Luhansk and Donetsk Oblasts). That was hilariously impossible, and their ambitions have gradually scaled down over the last seven weeks. Today, they’re trying to surround one tiny corner of it, the city of Severodonetsk, way out on an exposed Ukrainian salient. If successful, Russia would take just 5-10% of the Donbas territory still in Ukrainian hands, and look at how much it’s struggling to make it happen.

It’s a wonder Severodonetsk has survived this long in Ukrainian hands, adjacent to pre-war Russian-held territory, surrounded on three sides by hostile forces, and under relentless bombardment for months. A competent army would’ve taken it long ago. Now, it’s become Ground Zero for the war not because of any particular strategic value, but because Russia desperately needs the propaganda victory.

Bridge connecting Severodonetsk and Lysychansk. russian agents first blasted it in 2014. 🇺🇦rebulit it in two years. Today, russia destroyed it again. We are a persistent nation. We will rebuild the bridge after victory. To achieve it –#ArmUkraineNow pic.twitter.com/wRWNifk6nf

Russia needs those bridges to cross the Donets and attack Lysychansk. It also needs to capture Severodonetsk. So even if you assume Ukraine would blow the bridge eventually, why make it harder for the city’s defenders to leave? At most, there are a couple thousands Ukrainians defending the city (assuming they haven’t all mostly retreated already). Why not facilitate their exit so Russia can trumpet its glorious victory? And you never know—Kherson is in Russia’s hands because of Ukraine’s failure to blow a key bridge. Even a 1% chance the bridge might stay up would be worth taking. And even if Russia wiped out a couple hundred or even thousand defenders, it would hardly make a dent to Ukraine’s war effort, with now over 700,000 men and women under arms, and a mobilization effort boosting that to 1 million over the next several months.

Ukraine’s problem isn’t recruiting soldiers. It’s equipping them. And whatever is left in Severodonetsk ain’t likely much. But every day those defenders hold out—a timeline Russia just extended by cutting off retreat routes—is a day when all that foreign military aid gets put into service. Like this:

We have the UAF 5th Tank Brigade down in the south. They recently received 100 of the polish tanks. pic.twitter.com/xhk8VvtycO

Recent pictures have shown those Polish tanks with updated armor and optics. The YPR-765 is a modified M-113 armored personnel carrier. The Dutch never announced how many they were sending to Ukraine, but they had 500 decommissioned in deep storage since 2012. Hopefully they sent them all. When the United States announced it was sending M113s to Ukraine, I noted they would be perfect for a southern advance on Kherson—the open fields make unprotected infantry approaches vulnerable to artillery fire, and a stalemate has ensued in the region, with neither side able to hold territory under enemy artillery barrage. M113s, and its Dutch variant, won’t protect against direct tank or heavy cannon fire, but it’ll do nicely against artillery shrapnel.

100 tanks and 400-500 YPR-765s would be the equivalent of around 10 Russian full-strength battalion tactical groups, and maybe 20 actual real-life chronically under-strength BTGs. Russia has around three BTGs camped south of Kryvyi Rih in a stupid under-resourced attempt to push north out of Kherson, and another six or so in Kherson and its immediate surroundings. (And none are likely anywhere near full strength.) It’ll be interesting to see if Ukraine deploys this new tank brigade south in a serious bid to liberate Kherson, or if they’ll send it east to the Donbas to try and deliver a mortal blow to Russian forces massed around Izyum.

Finally, remember a few days ago Russia claimed it had retaken territory on its border north of Kharkiv, in Ternova and Kharkiv Oblast’s Rubizne?

1. We have not observed robust open-source evidence to confirm reports that Russian forces captured Ternova and Rubizhne in Kharkiv Oblast on May 20. Pro-Russian Telegram channels claimed that Russian forces attacked Tsyrkuny and Zolochiv and launched a counteroffensive in…

Reports that a Russian counter-offensive had rolled back Ukrainian gains in the region were never proven. Pro-Russian sources have a bad habit of declaring towns defeated when they reach the outskirts. Meanwhile, Ukraine claimed the liberation of another small settlement north of Kharkiv. Seems like the good guys are still slowly clawing back Russian territory in the area, even as Russia intensifies its activities in response.

Here’s video of that new failed Russian crossing, though we’re not seeing anywhere near a BTG worth of equipment (10 tanks, 40 infantry fighting vehicles, plus air deference, artillery, and support vehicles).

Reports coming in about Russia having lost another battalion tactical group yesterday in a new failed attempt to cross Siverskyy Donets river.pic.twitter.com/9kfzqN984O

Still, Russian BTGs are so undermanned at this point, this very well could’ve been one.

If it’s a tank brigade, then the armored fighting vehicles would comprise about 100 tanks in three tank battalions, and 50 APCs in the mechanized battalion (plus a handful more APCs with the brigade headquarters, the recon company, the air defense battery, etc., so maybe 70 APCs total).  Under most conditions, a tank brigade fights with three reinforced tank battalions, each with three tank companies and one reinforcing mechanized company taken from the mechanized battalion.