Sen. Ron Johnson seems to have been caught red-handed by Jan. 6 committee with fraudulent docs 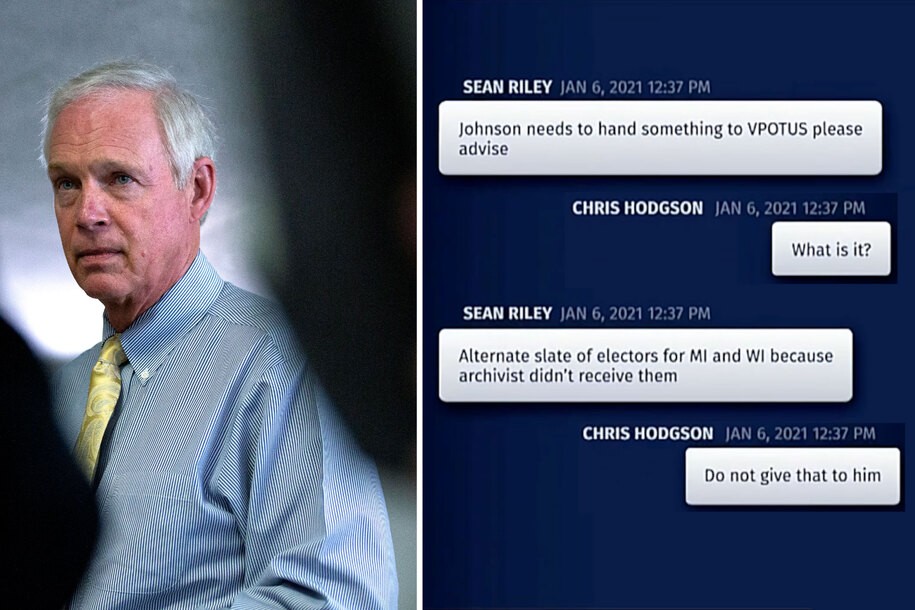 During Tuesday’s public Jan. 6 committee hearing, Rep. Adam Schiff took the lead in presenting the evidence that Donald Trump tried to personally get elections officials across the country to find fake votes and misrepresent elections by choosing alternate electors, while also calling on them to throw out thousands of Americans’ valid votes.

The most important thing to remember during all of the talk about the Big Lie—that the election was stolen using fraudulent votes—is the subterfuge. It isn’t a mistaken understanding of reality, it’s the fraud people like Trump and the Republican Party have been perpetuating against the American public and the Constitution in order to take control of our government in lieu of having the popular Democratic vote of Americans.

One of the important moments in the first half of today’s hearings was the first inkling that the committee has shown concerning Sen. Ron Johnson of Wisconsin’s deeper involvement in the conspiracy to overthrow our government.

Senator Ron Johnson is up for re-election this year, and we must mobilize front-line communities in Wisconsin to defeat him. Chip in $1 to each of these voter mobilization groups in Wisconsin.

Sen. Johnson has been doth protesting too much about the severity of the Capitol insurrection on Jan. 6, 2021, for some time now. He has argued that white people cannot break the law the same way Black people can break the law; he’s alternately argued that there was no “insurrection” at the Capitol building in the first place; and he has done all of this while being secretly recorded telling people that he knows and doesn’t “believe” the 2020 presidential election was fraudulent. Trying to overturn the election while knowing and believing that the election was legitimate is the definition of perpetrating a fraud.

We talk to expert Brandi Buchman about everything you need to know for the Jan. 6 committee, hearings, and investigation on Daily Kos’ The Brief podcast

He’s done all this while also spending December 2020 attempting to cast doubt on the integrity of the elections by using his position to oversee a tribunal circus concerning cybersecurity. This is the political theater that took place the month before the insurrection at the Capitol, and was filled with Trump-appointed officials saying that there was no evidence of election security breaches or fraud.

On Tuesday the committee succinctly explained how various states, including Ron Johnson’s state of Wisconsin, secretly put together a slate of fake “electors,” that Trump and conspirators hoped would help pressure Vice President Pence and others into joining the coup d’etat. These fake “electors” were appointed illegally, and their positions were held without merit, and yet Sen. Ron Johnson, on Jan. 6, attempted to hand deliver both Wisconsin and Michigan’s fraudulent documents to the Vice President in the hopes of getting him to refuse to certify the 2020 election.

How do we know this? The Jan. 6 committee has receipts in the form of text messages between Sen. Johnson’s aide Sean Riley and Vice President Pence’s aide Chris Hodgson:

CHRIS HODGSON: What is it?

RILEY: Alternate slate of electors for MI and WI because archivist didn’t receive them

HODGSON: Do not give that to him

UPDATE: Sen. Ron Johnson says he didn’t know about anything in the history of anything. That’s a denial of the proof presented today at the hearing.

Spox for @SenRonJohnson says Johnson was unaware of plan to send fake Trump elector slate to his office and that Johnson’s chief of staff acted on his own. https://t.co/QNDS8JKXlp