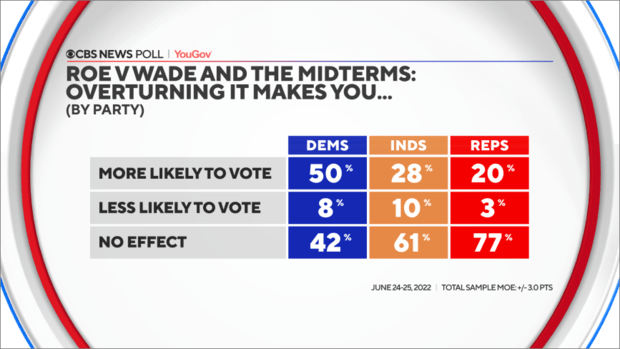 ‘The dog that caught the car’: Republicans brace for the impact of reversing Roe

Everything was going right for Republicans in the midterm campaign. Then the Supreme Court decision came down.

Republicans finally got the Roe v. Wade decision they wanted, and in public, they are delighted.

More quietly, however, according to interviews with more than a dozen Republican strategists and party officials, they just didn’t want it to come right now — not during a midterm election campaign in which nearly everything had been going right for the GOP.

If Manchin and Collins are genuinely surprised and irate, there’s an easy fix: suspend filibuster, enlarge court, add 4 justices, overrule Dobbs. It would blow up Court, and I’m not saying I’m for it; but OTOH the Court is now positioned to be a regressive force for a generation.

Majority Opposes Overturning Roe v. Wade… More than Six in Ten Say Decision Will Push Them to the Polls in November

The Supreme Court is the site of the new Forever War, and Democrats had better start acting like it. From @ThePlumLineGS and myself: https://t.co/EFzGKkScb5

While the overturning of Roe has elicited strong feelings, it’s not an issue most Americans say has made them any more or less likely to vote in the midterms this year. But for those who report a change in motivation right now, Democrats are more than twice as likely as Republicans to say the Supreme Court’s decision will make them more likely to vote.

And more Democrats are motivated now by the issue than they were before the decision. Fifty percent of Democrats report this decision will make them more likely to vote, up from 40% last month, when overturning Roe was a possibility, but not yet a reality.

Rebecca Traister on the struggle for reproductive rights after the murder of Roe: “It means doing the thing that people have always done on the arduous path to greater justice: Find the way to hope, not as feel-good anesthetic but as tactical necessity.” https://t.co/DO4McXVSlm

It’s no exaggeration to say that the abortion decision, written by Justice Samuel Alito and joined by four other conservatives, is one of the worst decisions in the court’s history.

In place of the living Constitution that protects liberty and equality from the tyranny of the majority, the court in Dobbs v. Jackson Women’s Health Organization announced a Constitution that only protects rights that already existed in the distant past. The majority considered it irrelevant that the people who ratified the original constitutional provisions did not include women, whose rights are at issue in Dobbs and whose equality is derogated by the decision. According to the majority, the dead hand of the past rules our constitutional future.

Many states with antiabortion laws have pro-choice majorities

Will purple states eventually fall into step with the views of their voters?

We focus on polls that ask whether respondents support banning abortion “in all or most cases” or keeping it legal in all or most cases. This means we exclude some polls that provide an ambiguous middle option about whether abortion should be legal under “some circumstances.” We then use a dynamic multilevel regression with poststratification model that squeezes as much information as possible from the data to make sure we have accurate estimates for each state.

Women’s participation in the workforce went from 43% in 1970 to about 57% today. That’s no accident. In addition to being a human rights violation & bad law, yesterday’s SCOTUS decision has grave economic consequences, not just for women forced to give birth but for the country.

America’s middle class is deteriorating. The death of Roe will make it worse.

The Supreme Court’s reproductive rights decision is poised to deliver a blow that many in a squeezed middle class cannot sustain.

A woman’s ability to time childbirth and plan her number of children is inextricably bound to her economic status and that of her family. Some assert that women with resources or those with “privilege” will be fine — they will just have to fork over more money for out-of-state abortions or pay illegal providers in the state where they live.

But it’s a lot more complicated, according to experts I spoke with.

The high cost of needed abortions in states with restrictions and bans, Barnard College economics professor Elizabeth Ananat told me, can “blow a middle-class family’s savings.”

Every time I re-read it I’m newly aghast. What an absolute embarrassment and betrayal of principle in judicial decisionmaking. The idea that our rights in a democracy are fixed at where they would have been in 1789 or 1868 is morally bankrupt & legally unsupportable. #Dobbs

What To Tell Our Daughters

They should be afraid, but never hopeless

So when my daughter saw me sobbing yesterday over Roe, she knew why. After offering me a hug and words wiser than most kids her age could muster, she asked a question that broke my heart: “But I’ll be okay, right?”

She knows that she lives in a state where, for now, abortion rights are protected; she knows that we have the resources to get her the care she needs, a privilege many others don’t have. She knows we have to fight for the people who live in states where abortion has become illegal.

But that doesn’t mean that she’ll always be okay, and I don’t have it in me to lie to her.

Just reviewed Henry Kissinger’s new book for @thetimes a story of heroes and villains, and one all conquering ego. https://t.co/Q9lK2P20GC pic.twitter.com/4mcQqnZKLR

🧵— Roe, the Laboratories of Autocracy Strategy (and how we fight it) I hope this thread will change the way many of you see politics in today’s America. And how you engage. It’s a tweet version of my book, and the presentation I give almost every night. Read on:

It starts with this slide.

Most people think there is a single battle in politics in America. But I’ve come to the conclusion that the two sides are fighting such different battles, there are actually TWO battles. And for the most part, one side does not see that reality.

The side on the left largely assumes democracy is intact, and understands that its political views are generally mainstream/popular, so this side’s political battle is about election outcomes. Win elections based on your mainstream views, and you get what you want done.
And because this side is efficient in pursuing its goal of winning elections, this side largely wages its battle for FEDERAL offices, in federal swing states & districts, in federal years.
When it wins those offices, this side celebrates, having won its political battle.
This is also how the media generally covers American politics. It’s how Democrats, most independents, and even some Republicans think about politics too. So what’s the other side’s battle?
Warning: it’s a very different battle.

Not a lot of examples of countries scaling back abortion access in the last 20 years but in those cases, each followed a move away from liberal democracy. https://t.co/uuhuiDNJzZ

This is going to be a long thread, but an important one.

We need to talk about the overruling of Roe, what the GOP/authoritarian movement wants, and where we’re heading.

Here’s what I learned writing The Midnight Kingdom and studying all this.

We entered a new era yesterday, a regressive moment in which the progress of the 20th century was openly attacked and a planned deconstruction of all our progress was sprung into the open.

We have to understand the ideology and the circumstances behind this movement.

Don’t let anyone fool you into thinking a Mississippi lawmaker “authored” the state’s 15-week abortion ban at the center of Dobbs. That was hatched in Washington, D.C. by the ADF, which says it wants “a Christian worldview in every area of law.”https://t.co/YxCzO6IgPy

We have to understand the ideology and the circumstances behind this movement, says Jared Yates Sexton.

Indeed. We should neither call all Christians wishing to vote their values “Christian nationalists” (and we don’t) nor reserve the term only for violent radicals. Why we prefer to talk about CN as a cultural framework & spectrum rather than a group label. #ChristianNationalism https://t.co/WlcwVaTD07