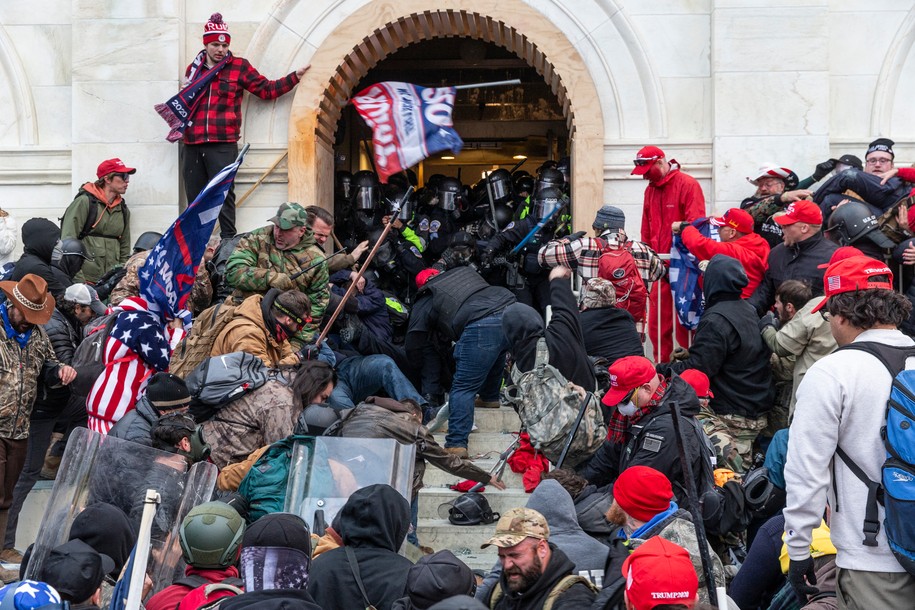 Violence is getting real

IT’S NOT JUST TRUMP — The testimony this week that former President Donald Trump knew some of his supporters were armed when he told them to march on the Capitol is still spinning heads in much of official Washington.

But maybe we shouldn’t be so surprised.

If we’ve learned anything from the Jan. 6 riot and, more recently, the fallout from the Supreme Court’s overturning of Roe v. Wade, it’s that political violence not only has a constituency in this country, but the numbers of those inclined to violence appear to be growing.

Good July 4th fact: The Coast Guard places a buoy every year in Baltimore Harbor to mark where Francis Scott Key observed the rockets’ red glare and bombs bursting in air and at dawn noted that the flag was still therehttps://t.co/XQxlr3Jghk

Good disinflationary tone to the top of WSJ this morning: pic.twitter.com/9cK2kDtxUD

It has now been 76 days since the Russians launched the Battle of the Dohnbas. This would make it one of the longest major battles in the 20th and 21st centuries. Many times longer than Kursk,e Bagration Normandy, Bulge, etc. Its much closer to WWI (Somme, Passchendale, Verdun)
And what has happened in the 2.5 months so far. Best to start with this map. Basically the Russians have dialled back enormously on their expectations (and frankly the expectations of others) that they would take a big chunk of Ukrainian territory.
Instead after 11 weeks of combat, major losses and command changes, desperate attempts to raise forces and concentrating their firepower in a very small area, the Russians have compelled to Ukrainians to withdraw from Severodonetsk and Lysychansk.
Even that phrase needs to be emphasized–the Ukrainians have withdrawn in good order, as the Russians have never cut their communications. The map above (and indeed modern combined arms and Russian doctrine) would have had as a basic task an encirclement of Ukrainian forces
However the Russian Army is incapable of fulfilling the basic tasks of modern war. Instead its does incremental, slow advances, a kilometer at a time. It can’t break through, it can’t exploit, it can’t encircle. This is not a sign of an advanced military.

What a Connecticut scene as we approach Independence Day weekend! A black bear resting in a tree on the shore of Candlewood Lake. Photo courtesy Brookfield First Selectman @TaraBrookfield I’ll see you tonight on the news at 5, 6 and 11 on @WTNH and at 10 on WCTX pic.twitter.com/Nqt4EDRmVv

The January 6 Committee Is Going to Have the Final Word

By establishing an official record of the insurrection, the members are creating clarity in a political moment fogged with lies.

As Thompson’s comments suggest, the January 6 committee has made the work of uncovering truth the lodestar of its public hearings. In a sense, of course, every congressional hearing is an effort to establish facts: Witnesses commonly swear, as Hutchinson did, to “tell the truth, the whole truth, and nothing but the truth”; false statements before Congress can be prosecuted even if they’re not made under oath. And as a committee established to uncover what happened on January 6, naturally the panel would be focused on the truth of the matter. But the January 6 committee’s hearings have so far been unusually powerful as a paean to the value of facts. The committee seems to take seriously its responsibility to establish an official record of the insurrection, and to communicate that record to the public in as accessible a manner as possible. That clarity is bracing in a political moment fogged with lies.

The short answer is that Republican policy is driven by a minority within a minority: white evangelicals have unusually restrictive views on abortion. pic.twitter.com/9TjkC8hrzV

Many of you have only seen this quote (or perhaps missed it altogether), so here’s Saul Cornell/Slate:

Ultimately, the majority opinion in NYSRPA v. Bruen is one of the most intellectually dishonest and poorly argued decisions in American judicial history. Indeed, with little sense of irony, Thomas even quotes Chief Justice Roger B. Taney’s infamous opinion in Dred Scott approvingly, not only treating it as good legal authority but suggesting that the author of the worst decision in American law understood the Second Amendment better than any other judicial figure in American history. Turning to Taney for judicial inspiration would have once ended a judge’s career, but the court’s new originalist majority appears most of the time to be making history by inventing it, instead of by interpreting the law. The old originalism of Robert Bork and Chief Justice William Rehnquist sought to use history to constrain judicial discretion and activism. The new originalism favored by Thomas and his fellow originalists has embraced judicial activism on steroids. Indeed, the court’s current use of originalism more clearly resembles an act of ventriloquism in which old texts are pressed into the service of modern agendas with little regard to how they were read at the time they were written. The new originalism, including the Bruen decision, turns historical actors into little more than stage dummies for the justices to project their own modern values and ideas onto the past.

Kansas is preparing for an Aug. 2 vote on an amendment that would alter the state constitution to say it does not guarantee a right to abortions, opening the door to pass restrictions or ban them altogether. https://t.co/9KqggLiwn0

Until Tuesday, we had both publicly stated that the Department of Justice had insufficient evidence to indict former President Trump for his conduct on Jan. 6. Our conclusion, which we each came to independently, was largely grounded in First Amendment concerns about criminalizing purely political speech.

But Tuesday’s explosive testimony from Cassidy Hutchinson, a former aide to Trump’s chief of staff, Mark Meadows, changed our minds. In particular, Hutchinson testified to hearing Trump order that the magnetometers (metal detectors) used to keep armed people away from the president be removed: “I don’t fucking care that they have weapons, they’re not here to hurt me. They’re not here to hurt me. Take the fucking mags [magnetometers] away. Let my people in. They can march to the Capitol from here; let the people in and take the mags away.”

Giuliani… –NY suspended his law license –Dominion suing –feds seized his phones over Ukraine –DOJ investigating him in fake electors scheme But… –his biggest trouble may be GA, where he’s at center of investigation into overturning 2020 resultshttps://t.co/4d7UTpvZ3f

The many reasons the “just vote” rhetoric from Democrats falls flat

“It is unacceptable that there was not a concrete plan the minute this decision came down.”

The legal and legislative challenges facing the White House — and national Democrats overall — are real and in some cases, insurmountable. Some of the things activists want, Biden simply might not be able to achieve, and may have less political support than leaving legislation up to Congress. At the same time, many of the demands activists are making are within the administration’s capacity and could have immediate impacts on people’s access to reliable information, and their ability to obtain abortions in the near term. Ultimately, too, if Democrats want their voters to stay mobilized this fall, they need to demonstrate that they’re able to act when they are in power.

For progressives who feel they are on the losing end of today’s conflicts, our national birthday this year should be an occasion to remember those who came before us and never gave up on bending the arc of our story toward justice and equality. My column https://t.co/CRIffYGTf0

The other great time was seven years ago. Or four. Or two.
The least important detail of Cassidy Hutchinson’s January 6 committee testimony is now the most hyped.

One reason is the shiny-object permanence we all suffer from to some degree. Former President Donald Trump trying to grab his SUV’s steering wheel and lunging for an agent truly is the salacious stuff memes are made of (nice one, Monica.)

Then there’s the real reason. Trumpist dead-enders very likely used the anecdote to cloud Hutchinson’s damning testimony of Trump’s potential criminality, and willing Washington reporters let them. The episode reveals everything about the selfish bad habits that (still!) turn ostensibly well-meaning journalists into the propaganda tools of our most reliable liars.

2% of Ds will vote R and 2% of Rs will vote D “in your district where you live, if the election for Congress were held now”. (Ipsos just before Dobbs) In most races, defections from party ID will be few and far between but we’ll have to see if Dobbs affects this. #Elections2022

For liberals, of course, there’s a lot to disdain about Cheney. Her wing of the GOP is responsible for some of this country’s worst anti-democratic abuses in recent history, such as the “war on terror” abroad and at home. She opposes much of what is required to truly protect voting rights and democracy.

But we need Republicans who are fully committed, and publicly so, to certain baseline principles. Election losses are binding. Voters deserve the truth about democratic outcomes. This is not something to trifle with: It’s a matter of the respect we accord each other as democratic citizens. The insurrectionist spirit afoot in the Trump movement and the GOP more broadly must be fundamentally renounced by any party that claims to be an actor in a liberal democracy.

This is truly what lies at the core of Cheney’s dispute with the rest of the GOP.

It’s fun how Fox News hosts pretend like they’re just covering this story and weren’t part of it. https://t.co/FIsMLcGsnj

Stunning new revelations about Trump’s fight to overturn the 2020 election have exposed growing political vulnerabilities just as he eyes another presidential bid.

Here in Iowa, the state expected to host the first presidential nominating contest in roughly 18 months, several voters signaled Thursday that they were open to another presidential candidate even if Trump were to run again. At the same time, some conservative media outlets issued scathing rebukes of the former president. Aides for multiple GOP presidential prospects also indicated, publicly and privately, that they felt increasingly emboldened to challenge Trump in 2024 following the explosive new testimony.

Nikki Haley, Trump’s ambassador to the United Nations, drew roughly 350 conservative activists to a congressional fundraising barbecue on Thursday in Sioux County, where Trump won 82% of the vote in 2020.

And there was ample evidence of Trump fatigue. Interviews with a dozen attendees revealed strong interest in a 2024 alternative, even if Trump is on the ballot.

Put differently, I’m less worried about Trump (who ought to be measuring his cell for gold lamé

curtains), and more worried about Trumpism.